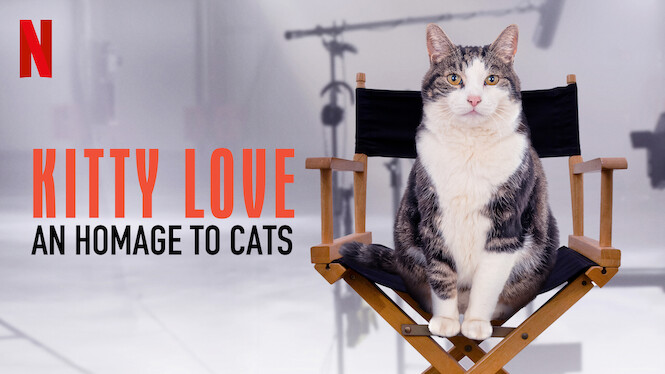 Netflix documentary Kitty Love: An Homage to Cats was released on the streaming service on June 5, 2021.

“I thought, maybe I’ll just quit,” was a line said by Gene Siskel almost thirty-some-odd years ago on one of David Letterman’s late-night incarnations. He said it after watching the Tony Danza film, She’s Out of Control— which was apparently a comedy starring the Who’s the Boss star having fantasies about his daughter. I’ve never seen it, but it has to be a classic compared to Kitty Love: An Homage to Cats, a film that I can only hope was made because of limited Dutch film availability over the pandemic. If not, my best guess is the owner and operators of Ready Steady Cut are running a behavioral study on obedience.

The director’s last name is not Milgram, but Mark Verkerk, a documentary filmmaker from Holland. He dedicated an incredible amount of time and work to what amounts to an extended youtube video filled with scattershot nonsense. Written by (yes, pick your jaw up off the mat because it has script credits) Darum and True van de Brug, the “plot” involves a cat going through a casting call to determine if the thespian feline has what it takes in Hollywood (the Dutch version). Spoiler alert: the script doesn’t even accomplish what it sets out to do. It strangely just ends, for no reason.

The “film” is basically inside out. The script seems to have been written after following the main feline around and inserting two actors (I can only assume the writers) with some inane plot point about going through a casting process. Then, to fill in the gaps, Verkerk has inserted a couple of dozen cat videos for what I assume was some cute effect. It’s like watching a sitcom where the commercials are the main attraction, and you come back from the written material break. Frankly, watching a string of funny cat videos on YouTube would have been a better use of everyone’s time.

Netflix’s Kitty Love: An Homage to Cats is not just made for a target audience that does not include me, but anyone really. This is not Homeward Bound but an act of animal cruelty (but not really). A Dutch terrorist attack on the art of filmmaking. A foreign film that would have given Trump and his band of MAGA right-wing fascists in the United States the right to close the borders down if he was still in office, while the left would respond with a, “Yeah, we get it.” I can only imagine what Gene Siskel would say about Vedek’s lazy attempt. All I know is I wasted an hour of my time on this garbage, and I want it back.