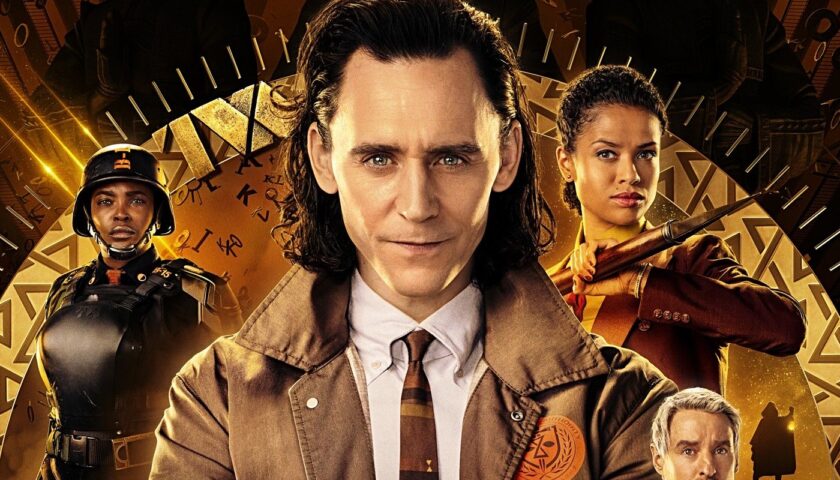 It should only take a few minutes before “Loki” viewers know whether they’re down for what the show is serving up or too tired of the Marvel Cinematic Universe machine to follow this chapter of its increasingly complex saga. The new Disney Plus show — the third under Marvel’s burgeoning TV offshoot — opens with dashing villain Loki (Tom Hiddleston) in the Avengers’ custody circa the 2012 movie that first brought the team together. In this version of those events, however, Loki manages to escape — thus upending the reality in which the character eventually dies at the hands of Thanos and freeing him up to anchor a show all his own.

Unfortunately for this Loki, his spontaneous getaway gambit sends him straight into the path of an armored guard (Wunmi Mosaku) who stares him down and declares that, “on behalf of the Time Variants Authority, I hereby arrest you for crimes against The Sacred Timeline.” Imbuing such a wholeheartedly cheesy line with hyperbolic gravitas is a superhero story staple, and yet this one’s grim righteousness still made me laugh in a way it was probably not supposed to.

For a new Marvel production, introducing a powerful league of militaristic cops is practically a prerequisite for whatever story is yet to come. But it’s nevertheless a bit of a letdown when you realize halfway through the dense first episode that one of the MCU’s ostensibly most unpredictable lead characters has somehow landed in the most predictable of setups.

To be fair, some of this irony is by design. As written by Michael Waldron, Loki very purposefully couldn’t be a worse fit for the monochromatic, bureaucratic order of the Time Variants Authority (or “TVA”), nor more offended when he understands exactly what it represents. As a chipper cartoon clock (“Miss Minutes”) informs him in an explanatory animated video, the TVA is an organization tasked with keeping every multiverse moving forward on the same “sacred timeline” as prescribed by three almighty  “Timekeepers,” which sometimes means snuffing out “Variants” like Loki who might mess it up.

The implication, Loki quickly grasps with real horror, is that there’s almost nothing anyone can do to change their fate; even his tricks are preordained parts of the greater whole. That emphasis on fate, paired with Kasra Farahani’s deliberately drab and vaguely midcentury production design, is what sets the TVA apart from something like SHIELD, though both share the same affection for unilateral authority and quips without punchlines.

I’ll leave it to bigger Marvel fans than me who can unravel exactly what the TVA’s level of authority means for the MCU at large. At first glance, though, it does seem as though the mere existence of the TVA should have huge implications, especially as upcoming big screen installments are set to explore the multiverse in more depth (including “Doctor Strange and the Multiverse of Madness,” also written by Waldron). For now, Loki has found himself outsmarted by this seemingly omniscient organization, forcing him to reluctantly team up with Agent Mobius (Owen Wilson), who’s convinced Loki can help them sift through an infinite number of timelines to track down one particularly pernicious Variant.

Only two episodes of “Loki” were screened for critics, making it hard to know exactly how successful the 6-episode season might be in shaping its own identity within the onscreen Marvel universe. Of these first two episodes, however, the second was far more engaging. The pilot has such an extraordinary amount of ground to cover that director Kate Herron only gets a couple opportunities to find humor in between the exposition, and Hiddleston can barely get into the pithy groove that made Loki such a standout in the first place. The second, at least, can have a bit more fun.

Waldron’s scripts do their best throughout to layer in moments of pathos for its central antihero to make clear exactly where his head is at in this point of his life. (To make it even clearer: this version of Loki has only lived through the events of the first “Thor” movie and “The Avengers.”) By the time Wilson’s Mobius extracts Loki from the TVA’s courtroom, presided over by an annoyed judge (Gugu Mbatha-Raw), Loki is so exhausted and annoyed that he can barely muster the energy to resist too many of Mobius’ probing questions about his end goals. “Why does someone with so much range just want to rule?” Mobius asks, voice thick with pity and admiration. Loki has no good answer besides the one he’s resisted ever since arriving at the TVA: he wants to rule because harboring that burning desire is just his fate.

After establishing all the wheres and whys, the series is then free to move on to the second episode, which gives Loki a bit more room to explore his surroundings and make some calculations of his own. (Emphasis on “a bit”; Hiddleston never quite gets enough time to play around with his character given the show’s pressing need to get to the next timeline and/or twist.) From there, the show establishes a new rhythm as Loki, Mobius and Time Monitor B-15 (Mosaku) ricochet throughout time. Given his experience on “Rick and Morty,” Waldron is comfortable with this dynamic of an odd couple traveling through time and space to potentially disastrous results, but still constrained by the ever-complicating Marvel narrative web surrounding Loki and Mobius. The end of the second episode teases an intriguing new direction for the series to take, but without knowing what happens next, it’s hard to say how much it might deviate from the usual script.

The most fun “Loki” has is when Hiddleston and Wilson get to banter — a distinction from when Mobius playacts as Loki’s placid therapist, a dynamic neither the character nor actor can fully sell. But Wilson’s singular comedic delivery, which somehow combines both a dry deadpan and puppy dog enthusiasm still strikes an amusing balance against Hiddleston, especially when he gets to drop Loki’s existential angst for genuine curiosity about the strange new world around him. And yet: when Loki sighs in frustration about the TVA’s tedious overreach dictating his story when he could be doing something much more dangerous and strange, it’s hard not to agree.