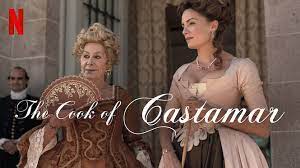 12 episodes. Adaptation of the homonymous novel by Fernando J. Múñez, set in 18th century Madrid. Young Clara Belmonte (Michelle Jenner) begins cooking for Diego (Roberto Enríquez), Duke of Castamar. This will change the lives of both, who will have to fight against one of the great obstacles of the time to be together: the difference of classes, in addition to facing the thirst for revenge of Enrique de Arcona (Hugo Silva).

The beginnings of the 18th century brought with the turn of the century endless changes in the main courts of Western Europe. In England the sad Queen Anne Stuart gave way to the nascent and German House of Hannover on the British throne, while in Spain the same happened. With the disappearance of the bewitched Charles II of Habsburg, the rich and powerful house of Bourbon landed in those kingdoms.

In the figure of another sad and depressing king, the old glory of those lands would have its rebirth. Felipe V, grandson of the French Louis XIV, after several treaties and political twists, would start the longest reign of Spain, which would lead, despite his attacks, to a new glorious stage, of juicy palace intrigues at the international level. succession wars and drastic changes in governments, with the nascent movement of the Enlightenment.

It is there that the story of “The Cook of Castamar” takes place. To be more exact and according to the literary original in the 1720s, with a king already well established on the throne and with his deep mental health conflicts. A young Clara Belmonte (Michelle Jenner) arrives at the home of the Duke of Castamar, a troubled widower Diego (Roberto Enríquez) who mourns the death of his wife. It is at that moment that we enter the palace as witnesses of a new history for both of us, with dark pasts, which they must face. He as secretary of the king’s council and she as the palace cook.

The game proposed and scripted by Tatiana Rodríguez and the team of writers of the twelve episodes come, let the patient reader apologize for our ignorance regarding the literary original, to various topics of the stories set in palatial halls where courtly intrigues extend to the suburbs of the mansion, with servants and others intervening in conflicts. Like an accelerated and less conspicuous “Downton Abbey” (2010-2015) , “Castamar’s Cook” brings together, as if it were an encyclopedia, all the artifice that under the romantic gaze of today we create and believe of those times.

The interesting thing is that the story, having a cook among its protagonists, will then have food as the fundamental basis of the spiritual story of the characters. A mixture between “Como agua para chocolate” by Laura Esquivel and her fascinating Tita and, why not, “Vatel”, a film by Roland Joffé, where culinary pomp is painfully little explored, although it is decisive for the drama. A Tita / François Vatel is this Clara Belmonte.

Certainly the rhythm of the intrigues performed by Enrique de Arcona (Hugo Silva) and Sol Montijos (Marina Gatell), Marchioness of Villamar, is a simile to the contradances performed in “Les Liaisons Dangereuses” by Pierre Choderlos de Laclos , that although they do not clash here, they do, unfortunately, take quite a distance with the cynicism with which they were created. Even the slightest bit of causticity to expose what these indolent and spoiled creatures of the nobility can do with their power plays.

This leads us to think about the discourse, which is clearly romantic, although in modern concepts of the definition and, therefore, modern also in the story. At the beginning of the eighteenth century, there is already talk of equality – although in the face of death, but equality at the end – that treats a woman as a reference of freedom and liberal education. Aggiornated beyond recognition, these creatures escape their era, and sooner rather than later the series loses precisely what is most interesting, the approach to those times and how its inhabitants resolved their dilemmas then.

An expensive and excellent setting – the feminine wardrobe design in particular with its French influences is exquisite – but they cloak a drama that could happen today without friction. And then the period drama loses meaning, because the attractive thing is to experience its ways, rules and customs. The idiosyncrasy of the Spanish court in transition from the old and worn Habsburgs to the bright and modern Bourbon era.

It is in the last three episodes when the story takes a hasty closing course towards the happy and pink ending, without a finished appreciation of the characters, and it is the waivers of ducats and other prerogatives to begin and an ellipsis to end that destroy what was built before. The only thing missing was “No animal was harmed in the making of this movie.” A shame, because the careful production of the period was reduced to just a background troupe, without substance as it was emptied of all its character. Then we remember “L’innocente” by Visconti, “The Portrait of a Lady” by Jane Campion , or the wonderful “The Age of Innocence” by Scorsese., to mention some works where the dramatic weight is given by the heroine’s struggle within the society in which she lives and by the rupture and reinvention or not of this, but always within those parameters. That is what is interesting in a period drama. It only serves as a stage and accessory here, and it’s a shame.

It is definitely an interesting proposal because of its cost and conception, because of the affection with which some passages are portrayed, but that makes water in its closure, in the credibility of its characters given the decisions they make to the detriment of a universe that never had space to your action.

And of course, it’s always a pleasure to see Michelle Jenner again.