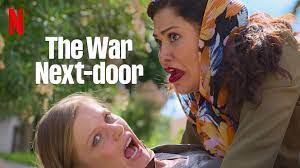 When the Lopez family strikes luck with a raffle ticket giving them a luxury home in a wealthy neighborhood, the story platforms a rich versus poor mentality. The neighbors next door, led by flagrantly suburban and successful woman Silvia, look down on their counterparts, and in true Them fashion, want them to leave immediately. Fortunately, the Lopez family, donning the matriarch Leonor, has to stay in the house for at least six months — that’s the terms and conditions.

So, in essence, Netflix’s The War Next-door is a comedy that riffs on class and race disparity. While the Lopez family is rich in love, their poor aura and ethnicity are clearly a problem for the white family next door. Although it’s not surface-level, the comedy slyly makes that the case. The rich do not like the poor, and there’s a slight tinge of racial annoyance.

But it doesn’t feel like a cultural or racial war. The War Next-door is how it sounds. Both families try and play against each other, with everything becoming a competition, meaning a series of gags come the audience’s way. In the opening chapter, the simplicity of a party at each household is too much to bear by Silvia. It becomes a matriarch versus matriarch war, and that’s where the comedy shines best.

Beneath all the madness and themes is a story of togetherness. The Lopez family is taking a massive risk by changing their circumstances. While the house is dreamy, the reality differs. The upkeep of a house like that is unfathomable for a poorer family. However, the subplot pulls through — there’s an earnest attitude of wanting better. The parents want a better world for their children. Yet there’s this itching feeling of “belonging,” which is sad, especially when the family question if they deserve to live in such a high-class area. While the comedy isn’t utilized consistently, the writers understand the struggles of a working-class family trying to make ends meet.

This is not a comedy that will encourage audiences to laugh heartily, but there is life in it, even if it is a little too gag-filled.