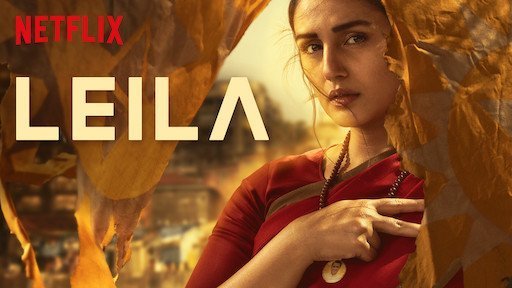 Horrors both real and imagined come together in Leila, Netflix’s latest Indian original series that was released on Friday.

The adaptation of Prayaag Akbar’s novel of the same name has been directed by Deepa Mehta, Shanker Raman and Pawan Kumar. Leila is set in the late 2040s in an India that is now known as Aryavarta. The totalitarian nation-state is headed by Joshi (Sanjay Suri), a semi-divine figure who lords over the populace through holograms, photographs and statues.

The social order has broken down following severe air pollution and rampant water shortages. The lines that divide caste and religion have taken literal form. Each community has its own sector, which is separated from the others by tall walls. The emphasis is on purity, and intermingling between communities is penalised.

Transgressors are cut off from their families and sent to facilities where they are given uniforms and reschooled in the new ways of the new world (“Mera janm hi hai mera karm” – my birth determines my fate.)

Shalini (Huma Qureshi) is one such transgressor, having committed the crime of marrying a Muslim, Rizwan (Rahul Khanna). They have a child together, Leila, who has been separated from Shalini. Over the course of six episodes, Shalini attempts to locate her daughter, dodging surveillance systems, thwarting thugs and uncovering a political conspiracy along the way.

Writers Urmi Juvekar, Suhani Kanwar and Patrick Graham make some significant changes to the source material. While Prayaag Akbar’s slow-burn narrative was largely driven by Shalini’s thoughts, the series functions as a thriller, with elements of intrigue. The timelines have been advanced – Shalini is younger in the series – and new characters introduced. These include Bhanu (Siddharth), Shalini’s state-appointed minder, Madhu (Seema Biswas), a fellow inmate who helps Shalini in her quest, and Dixit (Ashwath Bhatt), an architect who is spearheading an important project for Aryavarta.

The organisation that governs Aryavarta, and enforces its will through a thuggish group of security personnel known as Repeaters, is more sharply defined on the screen than on the pages of Akbar’s novel. In its muscular insistence on purity, archaic values and social hierarchies, Aryavarta resembles a state run by Hindutva extremists.

Although Leila is set in the distant future, there are unmistakable allusions to the present. Dissenters are branded as traitors, intellectuals are attacked and the Repeaters have unchecked powers. The supposedly liberal elite also come in for criticism – though they speak of egalitarianism, they treat their domestic help with disdain.

Comparisons with the American series The Handmaid’s Tale have consistently followed Leila, partly because the tyrannical future imagined in both narratives disproportionately victimises women. Echoes of the Hulu series based on Margaret Atwood’s 1985 novel are loudest in Leila’s early episodes, when Shalini is confined to a purification camp along with other women who have broken Aryavarta’s rules. The maroon sari-clad women spend their days doing menial tasks and are made to undergo sadistic rituals that include rolling over plates of half-eaten food. The blue-tinted cinematography by Johan Heurlin Aidt adds to the feel. But that’s where the similarities end.

The series deserves credit for daring to hold up a mirror to contemporary Indian society and warning that a similar brand of intolerance and exclusion could be round the corner if our worst impulses remain unchecked. However, the dystopia suggested by Leila isn’t always convincing. The series tackles too many themes – surveillance, hyper-segregation, social hierarchies, authoritarianism, pollution, a water supply crisis – without exploring any one idea with depth.

The physical world of Leila is closer to the present than the future. Gated communities, staggering inequality, streets teeming with filth, water shortages, polluted air, and mountainous garbage dumps that routinely catch fire are already commonplace in India. The production design doesn’t evoke an hypothetical and anarchic future as much as it reinforces present-day realities in Indian cities.

Although plotting exigencies mar some of Leila’s plot turns, the series cruises along on the strength of some of its performances. Huma Qureshi faces the daunting task of anchoring the series, and she rarely manages to convey the steely resolve hiding behind Shalini’s seeming obedience.

Siddharth is an interesting choice for the grouchy Bhanu, while Arif Zakaria is perfectly sinister as Iyer, the head of the purification camp where Shalini is sent after she is captured. The tussle between Siddharth and Shalini adds some momentum to the early sluggish episodes, and Bhanu evolves as an interesting foil to Shalini.