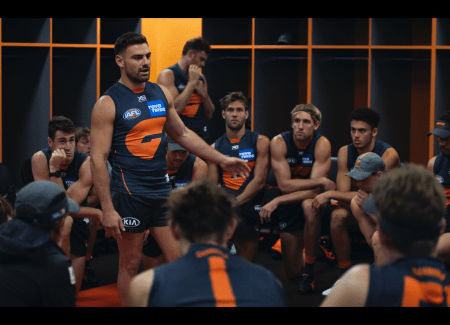 Today Amazon unveils its highly-anticipated Australian original documentary series, Marking Their Mark, but does it actually hit the mark?

The seven-part docu-series follows the players and executive from six teams of the Australian Football League as they navigate the ever-changing world of COVID-19.

The series opens  pre-season  and introduces us to the key figures which includes  Eddie Betts, who’s returned to Carlton after 7 years with Adelaide Crows, on a one-year contract; Rory Sloane, who’s now the sole captain of the Adelaide Crows, who are rebuilding after a mass-exodus a few years prior; master of the game Nic Naitanuiof the West Coast Eagles who’s hoping to play a full season; and Stephen Coniglio from Greater Western Sydney who made it to the Grand Final in 2019 but lost to Richmond. Alongside these key players we also follow the coaching staff, including Stuart Dew who oversees Gold Coast Suns as Senior Coach; and the Senior Leadership of Richmond Tigers Peggy O’Neal, Brendon Gale, and Damien Hardwick, as they pursue the ultimate goal of another AFL Premiership.

Over the course of the seven episodes, we follow the league as it deals with the impacts of COVID-19 and the teams living in hubs; the condensing of the season with 33 games played in only 20 days; the AFL making a stand with the global Black Lives Matter movement; and the Grand Final played at night AND outside of Victoria for the first time in its history.

Making Their Mark tells a complete story of the 2020 AFL season. It is a compelling series which offers insight into how the AFL managed to keep playing during a time when most of the country was unable work, attending school and go out. 5 Stars.