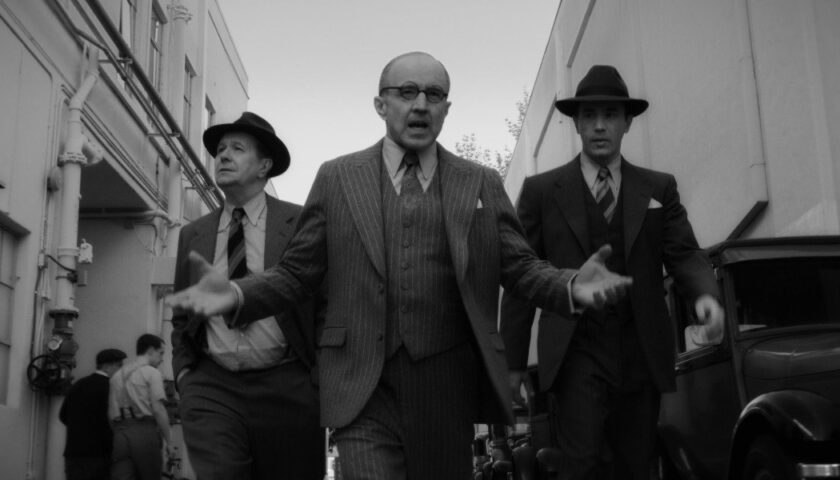 David Fincher has made a new film about Herman Mankiewicz, the storied screenwriter behind the writing of Citizen Kane, one which is a gripping, insightful portrayal of Hollywood’s golden age but also slightly lumbering on account of the film’s use of flashback sequences and footnotes. It’s possible this film would have benefited from a more linear narrative. The film flirts with greatness at several different points.

From the outset, there is a recurring theme of Mankiewicz’s tenuous relationship with the Hollywood executives, including Louis Mayer and Irving Thalberg. The film is at its most compelling when it touches on Mankiewicz’s doomed friendship with William Randolph Hearst. As portrayed here, the two men shared an initial rapport, one which gradually gave way to staunch political differences which over time became such a gulf that it served as the strongest impetus for Mankiewicz to take on this radical project. The theme of bitter political rivalries within Hollywood is well-presented here.

There is ample period detail here, including every effort to make this look like a 1940s film. And the performances are quite good. Gary Oldman shines in this role as the alcoholic but doggedly principled Mankiewicz, a man beaten down by own flaws but also quietly determined not to bend to those in power especially in his own creativity. Lily Collins makes a nice supporting turn as his assistant. Tom Burke is uncanny as the young Orson Welles before he was known for anything beyond radio. And Amanda Seyfried is a joy to watch as Marion Davies, a famous actress and a rare Mankiewicz friend within Hearst’s inner circle. My only major criticism would be that this could have also spent more time in the editing room. And the dialogue is occasionally so frenetic that it is difficult to follow, almost to the point of being gibberish. But these are minor flaws in an overall workmanlike effort.

Fincher has been quiet for some time now and it’s great to finally see another feature film from him. Although this is not his best, it certainly ends up as the most uncharacteristic film out of his repertoire and therefore a testament to his versatility as a director. It will make for a fascinating film experience even to those unfamiliar with the story being told here. Recommended to cinephiles and casual viewers alike.