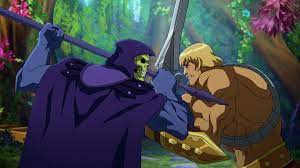 It would be easy in the first few minutes of Masters of the Universe: Revelation to mistake the new Netflix animated series as little more than a rehash of the 1983 original: Cringer cowers, Orko botches a display of magic, and Skeletor launches another seemingly fruitless assault on Castle Grayskull. However, it’s a delightful bait-and-switch that lulls viewers into expecting the status quo to be restored within 23 minutes, just before it pulls the rug out from under them.

While Revelation embraces seemingly every corner of the nearly 40-year-old franchise — no character or piece of lore, from the cartoons or the minicomics, is too obscure — it’s not a straightforward continuation of the syndicated classic. Nor is it the “woke He-Man” some sniping culture critics have warned about. It’s so much better than all of that.

Executive produced by Kevin Smith, who also wrote the premiere episode, Masters of the Universe: Revelation follows the devastating aftermath of a catastrophic battle between He-Man (Chris Wood) and Skeletor (Mark Hamill) that leaves Eternia changed and the Guardians of Grayskull divided. But with her world faced with a threat far greater than Snake Mountain, an embittered Teela (Sarah Michelle Gellar) must assemble a ragtag — and not entirely trustworthy — team to recover the missing Sword of Power, to save not only Eternia but the entire universe.

Unlike He-Man and the Masters of the Universe, which was little more than a patchwork of 23-minute toy commercials, Revelation is imbued with a sense of genuine stakes. Characters experience their own arcs, during which they change and grow; some even die. It’s refreshing and, occasionally, a little shocking.

In these first five episodes (Netflix will release the other half of the season at a later date), Teela emerges as the hero Eternia needs at this critical time. Angry about secrets kept from her for decades, she turns her back on her duties to Eternos and begins a life as an adventurer, only to be drawn back by her friends, family and, yes, enemies. Early criticisms of Revelation by some corners of fandom was no doubt sparked by the rumored role of Teela, who’s exchanged her metal halter top and butt-hugging leotard for honest-to-goodness pants. However, she’s earned both the spotlight and the costume change. So, too, has Evil-Lyn (Lena Headey), who finally moves out of Skeletor’s shadow to become one of Revelation‘s breakout characters.

Masters of the Universe: Revelation also has something new to say about He-Man, primarily through its exploration of Prince Adam, and — hold onto your hat — even about Orko, long viewed as nothing more than the annoying buffoon. And Skeletor is proved to be far more than the scene-chewing, yet ineffectual, villain of the original series.

Smith and his writers — Marc Bernardin (Castle Rock), Diya Mishra (Magic: The Gathering), Tim Sheridan and Eric Carrasco (Justice League Action) — display a love for Masters of the Universe that is both obvious and infectious. Even some of the silliest characters (Fisto, Stinkor) receive at least a little attention, while others are elevated to more prominent, and even formidable, roles. And if you’re a connoisseur of obscure He-Man lore, you’ll find it here (you win 10 points if you know what the Glove of Globolah is without resorting to Google). Yet, the creative time is also willing to acknowledge the inherent, if perhaps endearing, cheesiness of the 1983 cartoon, which comes through most clearly in flashbacks to events set during that era.

Fast-paced yet surprisingly nuanced, Masters of the Universe: Revelation honors the long history of the franchise while staking out new territory that should appeal to longtime fans and newcomers alike. This sequel doesn’t require viewers to possess an encyclopedic knowledge of the 1983 cartoon or the Mattel toy line (a grasp of the basic premise and key characters is more than enough to enjoy Revelation), but it repeatedly rewards those who do.

Executive produced by Kevin Smith, the first five episodes of Masters of the Universe: Revolution arrive Friday on Netflix.