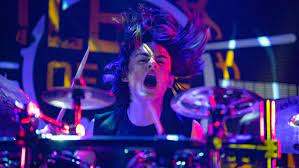 Metal music has some specific connotations associated with it, embraced by its fans and denounced by haters and skeptics. Any genre commonly grouped together with words like ‘death,’ ‘doom,’ ‘heavy,’ ‘sludge,’ or ‘thrash’ appeals to a certain group of people, while everyone else shakes their head in dismissal, disgusted by the pentagrams, long and greasy black hair, Satanic undertones, and downright anger of it all.

Metal Lords, the new Netflix movie from director Peter Sollett (Raising Victor Vargas), takes this often derided (and intentionally provocative) musical style and inserts it into the standard teen coming-of-age framework with surprisingly endearing results. You don’t have to be a metal fan to enjoy Metal Lords, as the music is explored for its universal themes. These aspects touch on a wide range of the human experience and are thus much more universal than wearing all black with spikes or biting the head off of a bat — the traumas, anxieties, and insecurities that go into being a misfit, or at least just not fitting in. Metal Lords is a simple, charming, and funny coming-of-age movie and meditation on misfits; it just happens to shred.

Oddly enough, Metal Lords is written by D.B. Weiss, who co-created the massive hit Game of Thrones with David Benioff, whom he worked with on the Netflix shows The Chair and the upcoming series The Three-Body Problem. Weiss, who could pretty much do whatever he wants after his Emmy-winning success with Game of Thrones, decided to write a small coming-of-age movie focused on metal music, which itself seems enough of a testament to Weiss’ passion for the project.

Weiss taps into what metal is in this film, which must have gotten it right to some extent — after all, members of some of the most iconic rock bands humorously appear in the film (Metallica guitarist Kirk Hammett, Judas Priest singer Rob Halford, Anthrax guitarist Scott Ian, and Rage Against the Machine guitarist and singer Tom Morello, who also produced the film). It even has a surprising little cameo from Chuck Klosterman, who has written some of the best work about music (and specifically metal) of the past two decades. Its great soundtrack and various visuals reference Black Sabbath, Slayer, Iron Maiden, Mastodon, Pantera, and Guns N’ Roses, so Metal Lords embraces the essentials and knows the world in which it dwells.

Metal Lords is a movie about high school life and being a teenager, especially one who doesn’t fit in with the rest. It centers on the friendship between two teens trying to start a metal band, Kevin and Hunter, and the girls, bullies, parents, and music that gets involved along the way. Jaeden Martell is excellent as Kevin, and continues his trajectory toward being one of the best actors in his age group. He broke through splendidly in St. Vincent opposite Bill Murray and Melissa McCarthy and held his own even as an 11-year-old. Since then, between his wonderful work in Midnight Special, Knives Out, and the It movies, Martell (née Lieberher) has established himself as a go-to child actor, and Metal Lords sees him leaving childhood and nearing 20 with subtle charm and mastery of his craft.

If Martell is the soul of Metal Lords, then Adrian Greensmith, who plays Hunter, is its bloody heart. With no credits to his name before this film, Greensmith is a revelation, coming across as a kind of teenage Adam Driver. He perfectly encapsulates the passion, intensity, and insecurity of Hunter, who becomes obsessed with metal after his mother left their family, and who does everything he can to push everyone away. He’s obnoxious and mean in many ways through a film that chronicles his journey to something a little more empathetic and patient, and is utterly magnetic throughout.

The actors and their characters’ relationships are the aforementioned heart and soul of Metal Lords; like Michael Cera and Jonah Hill in Superbad, another film about the teenage adventures of friendship, this new Netflix movie lives and dies by their performances, and they succeed swimmingly. The other actors are all delightful, especially Isis Hainsworth as Kevin’s equally anxious love interest Emily, but it’s Greensmith and Martell who seal the deal.

Hunter is a completely dominant character, a blitzkrieg on society who tramples over anyone or anything in his way, even if he’s getting the crap beaten out of him as a result. His best friend, Kevin, is shy and demure and submits to Hunter’s musical taste. He tries to play the drums like Hunter wants (even if sometimes the music “sounds like people being tortured”), and he learns everything Hunter writes down for him, like music sheets and lists of song titles. Kevin simply has no one else, and Hunter sticks up for him. Looking around at people dancing at a party, he perfectly captures what it’s like to have anxiety, wondering, “How do they do it? Like it’s the easiest thing ever?”

Hunter has his own insecurities, with an absent mother and an angry, hypermasculine plastic surgeon father (the always perfectly sleazy Brett Gelman), which is why he turns to metal. Ultimately, though, Metal Lords is less about the music itself and more about what it means, metal signifying a response to, and a way to exist happily outside, the mainstream. There is something inherently fulfilling about almost any dedicated subculture or niche following, whether one lives as a ‘juggalo’ for the group Insane Clown Posse or dresses up as a “sweet transvestite” for a showing of the iconic Rocky Horror Picture Show. These fan bases are often dependent upon a group of people who finally feel comfortable and like ‘themselves’ in a small group of loyal fans, something which explains cult classics.

Metal culture may be the apotheosis of this. Metal Lords spends a great deal of time discussing just what exactly metal is. “Metal is commitment, and speaking truth to power, and sticking it to the man, and speed,” Kevin says after narrowly (and dangerously) escaping a pair of bullies in a high-speed chase. As the film interrogates the genre (with its occasional homoeroticism, sexism, and angsty teenage nihilism), it comes to the ultimate conclusion that metal can be a kind of liberation when done with compassion and an open mind instead of pure hate and anger.

Liberation from the rules, from the mainstream, and from social expectations, yes, but also liberation from one’s own personal demons. Hunter, Kevin, and Emily all discover that metal can be a healthy way out from their own traumas, depression, anger, and anxieties. It can create a community of like-minded individuals who, though they might violently push against each other in a mosh pit, still find solidarity in the fact that they can be loud, weird, and defiantly themselves. Metal Lords captures this with charm, humor, and sweetness.

Metal Lords does, however, try to be a bit too charming. It’s one of the many coming-of-age movies with voiceover narration, spoken by Kevin in suitably poetic and wistful tones reminiscent of A Christmas Story and The Wonder Years, two titles which are undoubtedly not metal. This kind of youthful voiceover has become such a tired trope that it immediately warrants eye-rolls. In a visual medium in which artists are encouraged to ‘show, not tell,’ the same banal voiceover is superfluous and cringe-inducing. With nearly 40 years since A Christmas Story, it’s about time the whole childhood voiceover narration is tucked in, put to bed, and goes goodnight for a long time.

The ending of Metal Lords is also a bit haphazard and typical. It succumbs to many of the same tropes which have become overused cliches in romantic movies — the big fight, the final dramatic gesture, the feel-good dance party, and so on. There are some surprises, but the ending is essentially dull.

Nonetheless, the performances from Greensmith, Martell, and Hainsworth are all immensely charming and carry Metal Lords completely, with some winning humor and thoughtful exploration of metal music and the subcultures which attract so many. Countless people feel unseen in society, like nobodies, but in these kinds of niche communities, where they can be themselves and discover liberation from the mainstream, people can feel like lords. Metal Lords.