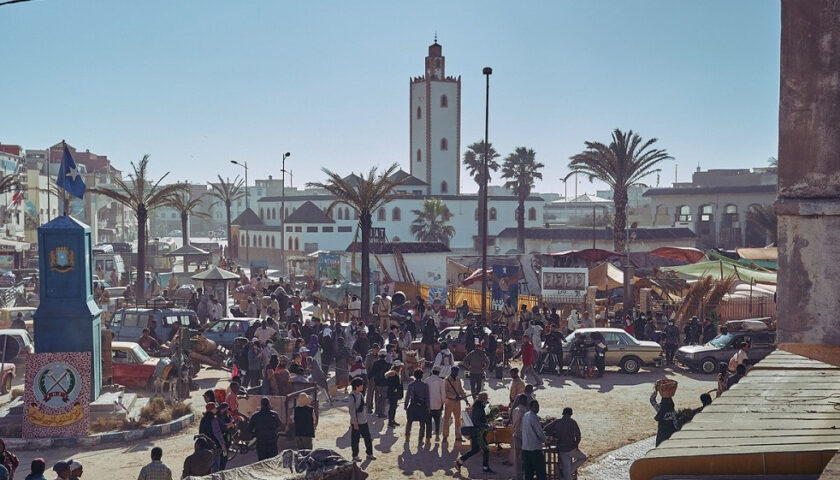 If North Korea and South Korea ever reunite and hold a celebratory film festival, “Escape from Mogadishu” is a sure thing for selection. Based on the amazing true story of embassy staff from both countries joining forces to escape probable death in the civil war-ravaged Somali capital in 1991, this propulsive and intelligently written South Korean adventure thriller casts partisan politics aside and celebrates what can be achieved when adversaries come together. Energetically directed by Ryoo Seung-wan (“Veteran”) and very well performed, “Mogadishu” has stormed to the top spot at the Korean box-office with more than a million admissions in the week since its July 28 release. The outlook is bright when it opens in limited North American cinemas on Aug. 6.

“Escape from Mogadishu” is a fascinating addition to the body of South Korean screen productions featuring North Korean characters in prominent roles. In light of the National Security Law, producers must be careful not to “glamorize” anything North Korean. Though not the first production to adopt a neutral or even sympathetic stance (hit TV series “Crash Landing on You” won wide acclaim for humanizing ordinary North Korean citizens in 2019-20), “Escape from Mogadishu” enters new territory by fairly and correctly portraying at least one senior North Korean government official in a light that is heroic but could never be considered glamorous.

The pressure on Han to get results intensifies with the arrival of Kang Dae-jin (Jo In-sung, “The Great Battle”), a cocky KCIA officer with a chip on his shoulder as large as the Korean peninsula. In their extreme naiveté, Kang’s bosses in Seoul have supplied him with a package containing alcohol, which is intended as a gift for Siad Barre, president of the Muslim nation.

Han and his small band of inexperienced ROK staffers are no match for DPRK ambassador Rim Yong-su (Huh Joon-ho, “Silmido”) and a well-oiled diplomatic machine that’s been operating in Africa 20 years longer than South Korea. With the help of his hot-tempered intelligence officer, Tae Joon-ki (Koo Kyo-hwan), Rim appears to be comfortably winning the battle for Somalia’s support.

That’s how things appear until all hell breaks loose between government forces, rebel fighters, marauding looters and gangs of thrill-killers whose ranks include children. As chaos engulfs the city it quickly becomes apparent that Rim and his team have been living with a dangerously false sense of security and face certain death if they remain in the compound. In highly suspenseful scenes he leads his team on foot to the South Korean embassy where, at the risk of breaking the National Security Law, Han agrees to their request for sanctuary.

What follows is a terrific mix of action-thriller excitement and riveting drama. It’s great to watch Han and Rim reject the paranoia-fueled protests of their respective intelligence officers and choose to instead find common ground. As the pragmatic Han says to his sensible opposite number, who’s also prepared to face consequences in Pyongyang, “Let’s state our goal clearly. We’re just banding together to survive.” In the long and tense night that follows we also learn about the status South Koreans can attain for securing defections, and measures taken by the North to prevent this, such as holding children of overseas-based diplomats in Pyongyang for “security.”

It’s not all deadly serious. Amusing gallows humor is added in scenes such as a group meal where fears of poisoned food hover before dining finally begins. The only major disappointment in the drama is the short change given to female characters. Apart from brief moments establishing Han’s wife, Kim Myung-hee (Kim So-jin) as a devout Christian, little is known about the many other women involved.

Ryoo ramps things up impressively once all hope of protection from local forces evaporates. Audiences are treated to half an hour of top-class car chases and shootouts as the group attempt to make it safely across town and onto a rescue flight. In scenes reminiscent of post-apocalyptic “Mad Max” imitators, Korea’s combined diplomatic corps hurtle through the lawless, bombed-out streets of Mogadishu in a convoy of battered cars covered in armor made from doors, tables, pots, pans and anything else that can be stuck on with duct tape.

Even thought the outcome is never in doubt, the execution of this survival run is genuinely thrilling. When it’s all over Ryoo wisely doesn’t succumb to unrealistically happy endings. The private mutual respect between Han and Rim delivers a hopeful message about the dream many hold for peaceful Korean reunification, but once they in public view it’s strictly business as usual.