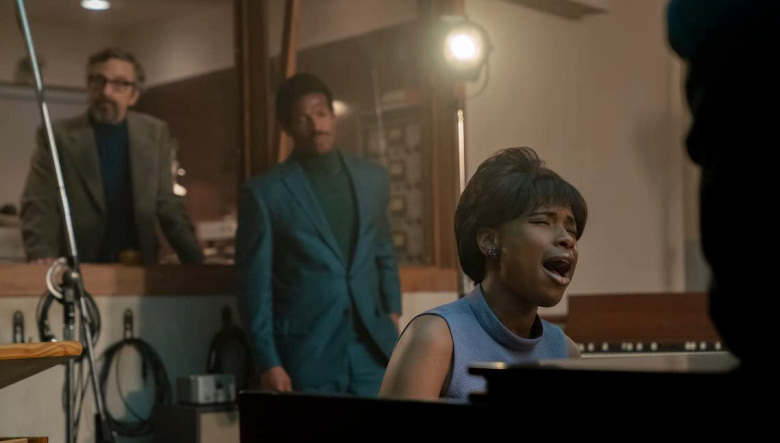 From age 10 till 30, Aretha Franklin sure could sing, but she hadn’t yet found her voice. At least, that’s the take served up in “Respect,” a solid if somewhat conventional feature directing debut for Broadway helmer Liesl Tommy which flatters Franklin in practically every way, beginning with the casting of Oscar winner Jennifer Hudson as the First Lady of Soul’s younger self. (It was Franklin’s personal wish that the “Dreamgirls” sensation portray her on-screen, and Franklin nearly always got what she wanted.) That’s not to say that “Respect” is pure hagiography, even if the title makes clear that Tommy intends for audiences to emerge with a deeper appreciation of the personal struggles — as well as the triumphs — that shaped Franklin’s signature sound.

Pandemic delays pushed “Respect” from the 2020 release calendar to Aug. 13, giving National Geographic’s Cynthia Erivo-starring, Aretha-focused season of “Genius” a chance to reach (small) screens first, despite objections from the Franklin family to some of the series’ tawdrier bits. Still, both projects are essentially committed to celebrating Aretha Franklin’s accomplishments, as musician, Black woman and civil rights advocate, and though “Respect” can feel a little soft in the drama department, it delivers the added pleasure of hearing Hudson re-create Franklin’s key songs, from the early jazz standards she covered for Columbia to her reinvention of the Otis Redding single that lends the film its name.

“Respect” begins and ends with Aretha singing in church. While her performing career would continue for nearly half a century after credits roll, the movie makes the case that Franklin’s musical identity was rooted in her religious upbringing — as a descendant of Southern sharecroppers and daughter of circuit preacher C.L. Franklin (Forest Whitaker) — and that her success, her purpose and her voice all crystallized with the recording of 1972’s “Amazing Grace” gospel album.

It’s not as if Franklin’s life suddenly simplified after the making of “Amazing Grace,” which was filmed by director Sydney Pollack for a documentary whose release Franklin blocked for decades, remaining unseen by the public until after her death in 2018. Still, there’s a certain poetry in suggesting that the unconventional album (which went on to be her most successful) was Aretha’s answer to that most tired of music biopic clichés: the way that, in everything from “Walk the Line” to “Rocketman,” acclaim sweeps super-talents up and up — and eventually astray — until they crash at a substance abuse-induced rock bottom.

While “Respect” is burdened by some of those tropes, the screenplay by Tracey Scott Wilson (“Fosse/Verdon”) and Callie Khouri (“Thelma & Louise”) doesn’t try to manufacture drama from Aretha’s drinking. Nor does it turn away from that reality, as when she goes onstage soused and falls off it in Columbus, Ohio. The film reveals that Aretha has been led to believe there is a “demon” lurking in her personality. Sure, she can be difficult at times, but “Respect” tries to contextualize everything she’s dealing with (albeit in an oblique way that sometimes reads as too tasteful for its own good).

Despite a financially comfortable upbringing, Franklin’s childhood was not without challenges: She gave birth to her first son at age 12 (conveyed via flashback), and her over-protective father had perhaps too strong a hand in shaping her career and life choices. Early in the film, he invites young Aretha (played by Skye Dakota Turner) up to the pulpit to sing, and the camera does a 360-degree tour of the church before returning to find Hudson now standing in her place. But Hudson continues to channel an almost girlish hesitancy around Aretha’s father and her first husband, Ted White (Marlon Wayans).

The song “Respect” may be an all-time-great empowerment anthem, but the Aretha who sings it here hasn’t yet learned to live by its words. (Or maybe she has, as Franklin was always coy about what the choir-like “Sock it to me” refrain was supposed to mean.) Hudson’s Aretha seems too intimidated to speak up much of the time, letting Ted — who elbowed C.L. out of the way as manager, and balled his fists whenever he got angry — make the decisions.

After nine albums minus any big hits, Aretha switched labels to Atlantic, taking the advice of producer Jerry Wexler (Marc Maron) to record in Muscle Shoals, Ala. There, she walked into a room of white men and cut “I Never Loved a Man the Way I Love You,” embracing the soul sound that would define the rest of her career.

The movie doesn’t make too much of the racial politics of the time, which played a greater role in Lee Daniels’ recent (and relatively unhinged) “The United States vs. Billie Holiday” biopic, but then, Franklin was a different kind of singer. For one, she came from money. Her father was well-connected, and she counted Martin Luther King Jr., Sam Cooke and Dinah Washington among a wide circle of family friends (as Dinah, a barely-seen Mary J. Blige delivers the film’s campiest line, overturning a table at one of Aretha’s shows: “Bitch, don’t ever sing the queen’s songs when the queen is in front of you!”). Instead of writing controversial protest songs, Franklin stuck to pop — and yet, she used her position to advocate for Black rights, performing at fundraisers and other events for King practically anytime he asked.

Eventually, Ted’s outbursts become too much for Aretha, and she leaves him. The singer may have covered her share of spiritual music, but “Respect” doesn’t pretend that its subject was strictly pious. As depicted, Aretha follows her passions, just one more way in which this remarkable woman seems to know what she wants. It’s not until quite late in the film — when Aretha tells Jerry that she wants to do “Amazing Grace” — that she finally speaks with the same authority fans have long responded to in her music.

In a sense, she’s had a lifetime of singing experience by this point, but is only just learning to assert herself behind the scenes, and here we see the benefit of having the Jennifer Hudson of today (as opposed to the less self-assured actor-singer of 15 years ago) in the role. Aretha Franklin was as important a female vocalist as America ever produced, and while “Respect” affords a glimpse of the vulnerable, uncertain woman she once was, audiences fully expect her to appear iconic. Hudson has the pipes as well as the presence, and that, plus the film’s two-and-a-half-hour running time, make the film feel more definitive than it is.