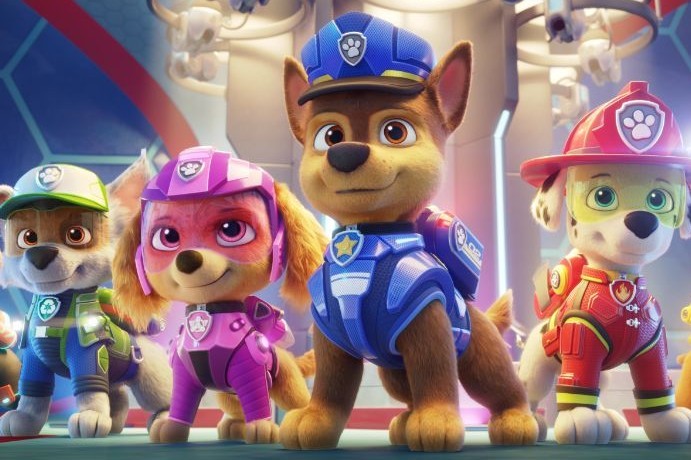 Since the “PAW Patrol” series began airing in 2013, we’ve seen the heroic pooches and their fearless 10-year-old leader go on a pirate adventure, rescue dinosaurs and tangle with various other foes in their fictional, idyllic world. In the real world, the show has left its mark on the pop-culture zeitgeist with bountiful merchandise deals and as the butt of jokes on other TV shows. It even became an unwitting lightning rod for political controversy when the now-former White House Press Secretary erroneously reported it was cancelled in the wake of Black Lives Matters protests.

Nevertheless, the popular Canadian-produced preschool show persisted, and now the squad is on its toughest mission yet in the imaginatively named “PAW Patrol: The Movie,” which bows in theaters and on Paramount Plus on the same day. Writer-director Cal Brunker, along with co-writers Billy Frolick and Bob Barlen, add further depth and dimension to these beloved puppy protagonists, embracing cinematic spectacle and character-driven emotions to deliver a surprisingly potent feature. Any crass consumerism is eclipsed by disarming, demonstrable themes and meaningful sentiments woven throughout the film’s textured fabric.

Adventure Bay is a quaint seaside hamlet where intrepid youngster Ryder (voiced by Will Brisbin) and his crew of perky pups are in charge of the town’s rescue operations. “No job is too big; no pup is too small” is their motto. Out of the blue, they field an emergency call from plucky, valiant dachshund Liberty (Marsai Martin) in neighboring Adventure City. Blowhard Mayor Humdinger (Ron Pardo) — PAW Patrol’s biggest adversary — has just won the city’s election and is instituting harmful policies, not only for dogs, but humans too. The arrogant, narcissistic buffoon is making good on his overzealous campaign promises with sweeping infrastructure reforms — like building a loop-de-loop for the subway system and a skyscraper only fit for his ego. Worse, he’s commandeered a weather-controlling science experiment that, when overtaxed, will threaten everyone’s safety.

While firefighter Marshall (Kingsley Marshall), pilot Skye (Lilly Bartlam), bulldozing bulldog Rubble (Keegan Hedley), recycling handypup Rocky (Callum Shoniker) and aquatic rescuer Zuma (Shayle Simons) are all excited to help their No. 1 super fan and humankind, stouthearted police dog Chase (Iain Armitage) isn’t as thrilled. He’s dealing with some nerves stemming from his early years as a scared stray in Adventure City and isn’t quite ready to return to show them the hero he’s become. He tries to be courageous, outfitting himself with new gadgets and gear and taking to heart Ryder’s pep talks. However, once there, his issues resurface, manifesting through crippling bouts of anxiety, causing him to doubt himself, make careless mistakes and get into dangerous circumstances during rescue operations. As a literal and metaphorical perfect storm unfolds, it brings the pack closer together than ever before.

The filmmakers take great craft and care building out this universe — one where dogs speak to humans and a 10-year-old drives an RV — in order to tell an expansive tale with empathy, complexity and engaging character dynamics, all while retaining the spirit of the series and keeping lessons digestible for young audiences. They engage with cool and warm lighting tones in the CG-animated environments, giving the film moody, evocative aesthetics that the show lacks. The intensity of the action is perfectly pitched for pint-sized audiences. The gang’s adventures (like putting out a fireworks stunt gone haywire, or rescuing both a truck driver dangling off a bridge and the scared sea turtle he dodged) don’t feel like mini-episodes joined ham-handedly. They’re tied together cohesively, each with a greater function in the narrative’s overarching themes demonstrating courage, altruism and the power to inspire change.

While each of the Patrol get their own movie moment to shine, drawing the focus onto two of its members — potential member Liberty and group stalwart Chase — helps better hone the internal and external stakes. Chase’s psychological strife is well-executed and approached compassionately. The filmmakers don’t hand-wave away poignant, sad notes. Rather, they let them linger, showing characters working through conundrums, since problem-solving is a commendable tenet carried over from the show.

Liberty’s journey, as she yearns to be part of the group, isn’t portrayed as desperate. This capable heroine’s got gumption and her contribution to the teamwork (another series virtue) is a bonus. Supporting characters, like the doofy henchmen (Randall Park and Dax Shepard), goofy news reporter (Jimmy Kimmel) and snooty poodle (Kim Kardashian West), handle the film’s sillier moments. And Yara Shahidi, who voices an overly verbose scientist, is gifted with the movie’s long-running gag, hurriedly saying convoluted scientific jargon only to have to dumb it down.

Outside of its pathos, the animated adventure is infused with a cheeky sense of humor, from Mayor Humdinger’s pants-less pratfalls to the self-aware joke about how Ryder financially supports the troupe (merchandising!). This winking nod would sound obnoxious and leave us feeling complicit if the sequences showcasing the patrollers’ new tactical wardrobe and shiny vehicles weren’t gleefully adorable hype montages for the four-legged heroes. Kiddos might fall prey to its consumerist underbelly, but at least parents won’t feel like they need to be rescued from the movie itself.