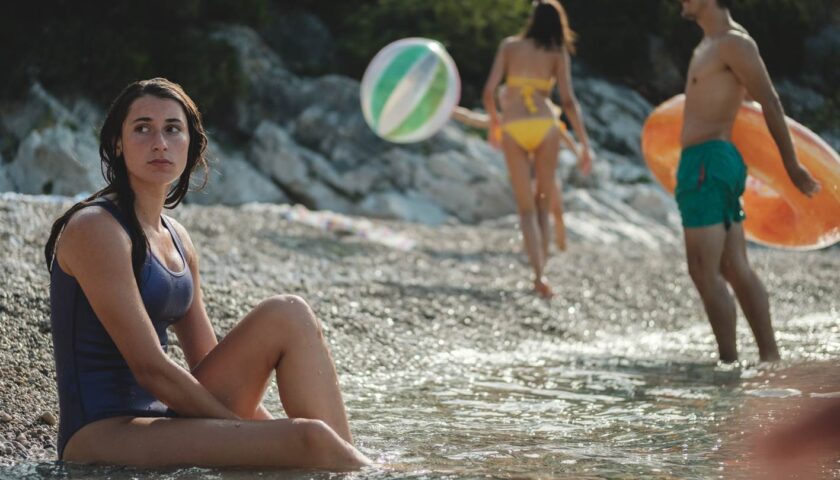 Set on the dazzling Adriatic coast, Murina follows Julija (Gracija Filipovic), a timid and frequently lonely girl living in a large house that overlooks the sea. However, things aren’t as idyllic as they initially seem. Julija’s father Ante (Leon Lucev) is a controlling, conservative and boarish man. His tight grasp on both her life and her mother’s (Nela, played fantastically by Danica Curcic) is causing her to increasingly detest both her family and the life that they seem to have planned out for her.

Everything changes when Ante’s longtime friend Javi (Cliff Curtis) comes to visit. He is a big business man that is clearly very wealthy. The reasons for his visit are simple on the surface – he is coming to take part in a land deal that Ante has setup. However, as the film progresses, his real intentions become increasingly more murky. Little backstory is given but it is made clear that Javi and Nela were at one point romantically involved. Julija and both Ante both sense this and it affects both of them in different ways; Julija seeks freedom in the seemingly free life she would live with Javi, while Ante’s bitterness only inflates his already broken ego and masculinity complex.

Murina plays out like a melodrama much in the vein of something by Pedro Almovodar or Douglas Sirk. Simmering tension is constantly building throughout the film and Antoneta manages to create some genuinely tense scenes; one being when both men have the woman on their shoulders and are play-fighting in the water, it escalates until Ante’s rage bubbles up and someone actually gets injured.

Much like a classical melodrama, the aspect of forbidden love looms over the lives of its characters. Everyone in this family is achingly sad, especially Nela – she is bound by tradition to stay with a husband who she obviously hates and she loves a man that she realistically can’t have. This is pushed further with the fact that her daughter blames her for marrying her father rather than someone loving and caring. Conflict between the family members grows like a snowball; slowly at first until it rapidly surmounts into a rewarding, but ultimately expected, conclusion.

One of the greatest things to capture on camera is water. It almost always looks beautiful to look at on screen and this film is no different. ​​Hélène Louvart (The Lost Daughter) captures the hollowed beauty of coastal life wonderfully. It simultaneously looks picturesque whilst having an isolated feel to it. Underwater sequences are made full use of and whilst they can certainly look brilliant they can get a bit boring after a while as they become uninteresting after the initial spectacle has worn off. There’s some great sound design here too, with the sound of waves crashing and bodies colliding with the water.

While Murina doesn’t do anything new, it is certainly a very well made and thoroughly enjoyable debut film. The central performances are all great to watch with their actions and dialogue all feeling genuine and real. Even if some parts of the film don’t always work, it is a truly promising debut from Antoneta – and considering this film was executive produced by Martin Scorsese, we almost certainly won’t have to wait long for her next film.