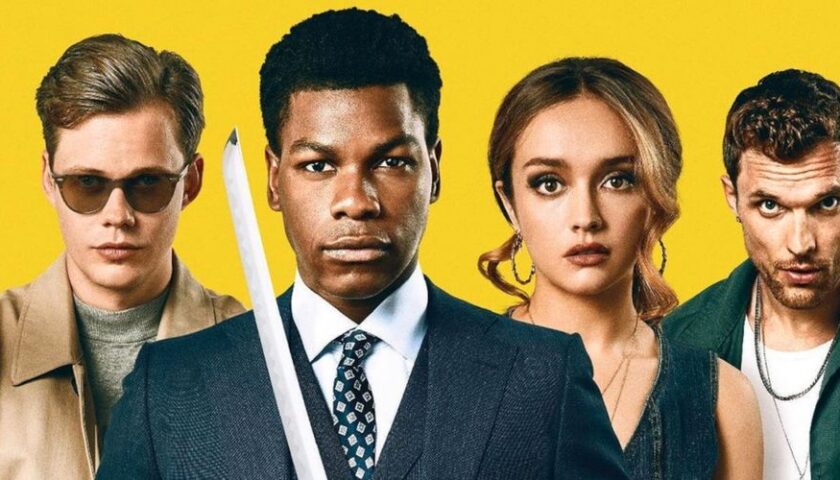 Adapting Sergio De La Pava’s self-published, Pynchonesque, 700-page debut novel “A Naked Singularity” into an 86-minute crime saga would seem to be an inherently radical act, and yet “Naked Singularity” is the work of an untested filmmaker who knows how to streamline but lacks the chutzpah to swing for the fences. That filmmaker is “It” scribe Chase Palmer — a first-time writer-director born with a veteran producer’s name — and while his New York legal thriller boasts a few brief flights of fancy, it’s frustrating to watch a movie that wants to go full “Southland Tales” but settles for a half-hearted episode of “Law & Order: WTF” instead (Dick Wolf is unsurprisingly credited among the executive producers).

You get the sense that John Boyega, whose social conscience has added a searching moral urgency to his post-Finn performances, was down to take things a lot further and weirder than the film around him ever does. The “Red, White and Blue” star assumes the role of Casi, a cocky but rumpled young public defender with the intensity of a puppy dog who’s trying to warn people about a coming earthquake that he alone can hear; it’s like Casi is able to see the on-screen text warning us that we only have “12 days until the collapse.” So while his silver-tongued demeanor suggests we’re in for a traditional courtroom drama about the gravity of a country that was designed to weigh people down (“sleep is for lawyers who lose,” he tells an unamused judge), Casi vibrates in a way that suggests the whole Earth is about to come off its axis.

And from its title on out, this is nothing if not a movie that projects mortal concerns onto a cosmic scale; the criminal justice system is a black hole, and most lawyers can only shield themselves from the soul-eating spectacle of it all by hiding behind the event horizon of “fighting the good fight.” But after failing to defend an addict who’s thrown in jail for staying clean, Casi can’t help but see the problem straight-on — as a naked singularity. The next thing our hero knows, he’s crushing on a recovering criminal named Lea (Olivia Cooke), embroiled in a messy drug heist that involves her crooked fuck buddy Craig (Ed Skrein) and the Jewish mob (personified by Kyle Mooney, whose performance seems to have been lost in post), and working outside the law to engineer a more equitable kind of justice.

At its best and most unmoored, “Naked Singularity” feels like a John Grisham movie that’s staring into the sun. A mysterious blackout plagues New York; Craig rambles on about lizard people conspiracies; elevator doors are tagged with a quote from “Candide” (“If this is the best of possible worlds, when then are the others?”). At one point, Boyega starts to float above the ground. By the time Tim Blake Nelson shows up as Casi’s eccentric friend who only exists to rant about how “the binding of the universe is starting to unravel” because “things that used to have no mass suddenly do,” it’s clear that things are about to get as crazy as, say, providing the 10.5 million people arrested in America each year with only 15,000 public defenders.

Except, they don’t. Without the willingness and/or the resources to embrace his source material’s freewheeling world-off-the-rails energy, Palmer opts for an unsatisfying compromise that — like so many of the people ensnared by the courts — is caught somewhere in the void between what is and what should be. Much of “Naked Singularity” is spent detailing why a drug shipment ended up in an impounded car, how these characters are conspiring to get it, and which of them will get to collect the money at the end of the day. Precious little of the movie is spent mapping out the details of Casi, Lea, and Craig’s overlapping agendas, or establishing clear emotional stakes that trace back to the film’s broadly damning indictment of the American legal system.

Instead we get Dane, a cartoonish lawyer played by Bill Skarsgård who shows up to insist that this is their “chance to carve our names across the back ass of the universe.” His over-the-top performance is wrong here but right for the movie this should’ve been, and Palmer’s inability to find a sensible place for Dane in the story reflects the broader problem of an adaptation that lacks the same courage that propels its characters.

Rather than embrace that paradigm-destroying zeal, “Naked Singularity” hides its eccentricities in the margins. From its shot compositions to its sub-Elmore Leonard story beats and the cringey banter that comes with it (“Blow me,” Craig tells Lea, “I did, very underwhelming” she replies), Palmer’s debut plays by the same conventions as every other feckless legal thriller in recent memory, even if you can tell that the cast and crew all signed up in the hopes of coloring outside the lines. Alas, the scene where Casi trades in his suit and tie for a samurai sword is the exception that proves the rule. Boyega is a compellingly frazzled lead, and Cooke has a rare gift for grounding fanciful movies in real places (see: “Me and Earl and the Dying Girl”), but they’re fighting city hall in this one, and whatever victories they eke out along the way feel like empty fantasies.

“What if reality isn’t fixed?” someone asks. If there’s a world where everything is shit and Casi doesn’t go through with his plan, that means — per Voltaire — there’s also a world where he does. “Naked Singularity” may be set in that second world of bold choices and revolutionary acts, but it certainly wasn’t made in it.