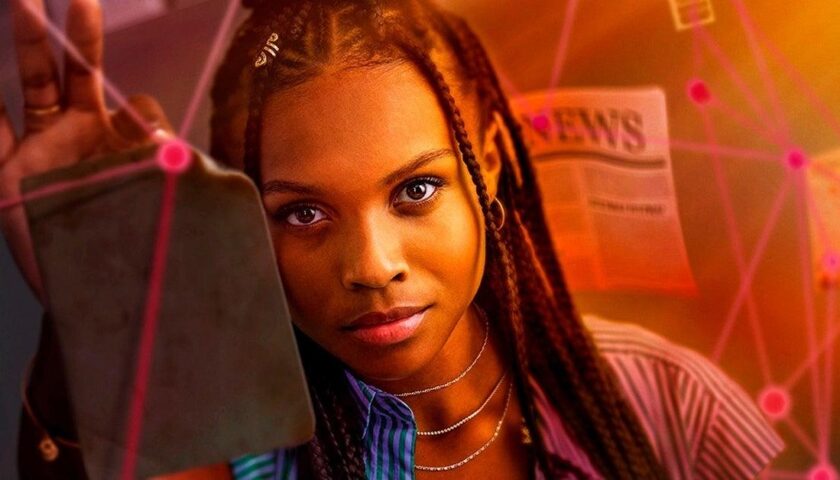 Even though high schooler Naomi (Kaci Walfall) tells us in her opening voiceover that “everyone has a superhero origin story,” hers immediately looks different enough from most on TV to stand apart. For one, she follows in the footsteps of Javicia Leslie as The CW’s second Black woman to lead a DC superhero show, albeit one as different from “Batwoman” in tone and storyline as can be. From executive producers Ava DuVernay and Jill Blankenship — and with canny, fluid pilot direction by Amanda Marsalis — the CW series feels something like if “Superman” blended up weekly comics with the sensibilities of a “Buffy the Vampire Slayer” or “Secret Files of Alex Mack.” For another, Walfall’s Naomi isn’t some moody outcast waiting in the wings for something amazing to happen to her, as is the case for so many other potential heroes. In fact, as the first episode conveys in an efficient and skillfully executed establishing scene, Naomi’s the cheerful life of the party who everyone’s glad to see the second she steps into a room. She’s warm, fun, and openly passionate about her “nerdier” interests — namely, and not coincidentally, comic book heroes like Superman, a fellow adoptee whose story she’s treasured as long as she can remember.

What’s more, Naomi has plenty of strong connections to the world before hers turns upside down. Her parents (Mouzam Makkar and former WB mainstay Barry Watson) are endlessly proud of her. She has a loyal best friend (Mary-Charles Jones), a still-devoted ex-boyfriend (Daniel Puig), and not one, but two flirtations with eventual co-conspirators Anthony (Will Meyers) and Lourdes (Camila Moreno). Naomi is, in other words, an exceptionally well-adjusted and happy kid before she learns the full truth of who she actually is — and when her friends and family realize that truth along with her, it says everything that they’re far less surprised than she is. As played by the very capable Walfall, it’s easy to believe that Naomi’s always been the main character.

Who and/or what Naomi is has been deemed a spoiler by the network, but the first two episodes of her series set up a relatively straightforward, but charming enough superhero story about a high-schooler with a tight group of friends, a keen sense of curiosity, and a belief in not just justice, but herself. It’s a welcome departure from The CW’s slate of otherwise too-often grim superhero dramas, and a smart blend of genre tropes that should fit well on the network should it allow it enough time to let Naomi’s more unique story unfold.