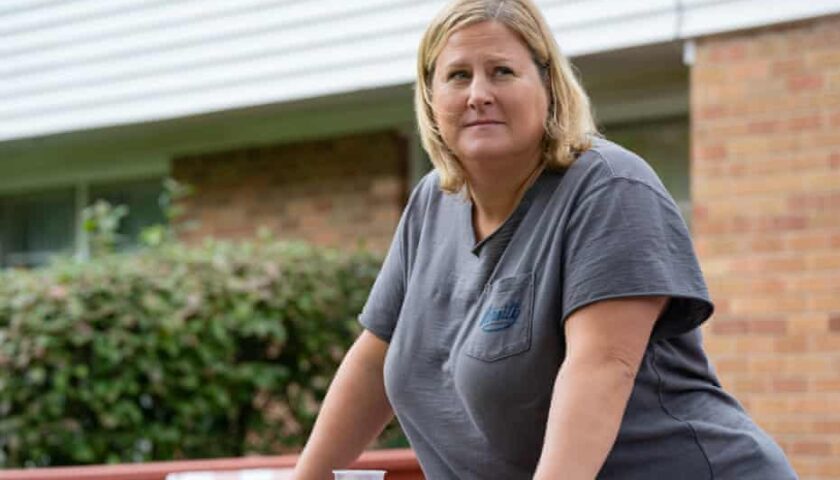 Life is composed of the sweet and the sour, so it only makes sense that several series have tried to squeeze humor from bitter moments. While Hannah Bos and Paul Thureen’s HBO series “Somebody Somewhere” has a tragedy in its plot, the half-hour pseudo-comedy feels less about grappling with loss and more about dealing with existence in general.

Sam (Bridget Everett) has had it hard. Her sister and closest friend Holly just succumbed to cancer, leaving Sam emotionally and professional adrift, shut off from the world, and barely able to move off her bed/couch. While working in a student testing center she meets Joel (Jeff Hiller). Actually, her and Joel knew each other from high school, but Sam has no memory of him. The two start to form an unlikely bond involving music that slowly starts to make Sam’s Kansas hometown feel tolerable.

“Somebody Somewhere” is about belonging and how often the places we end up are forced to feel like home by default. While Dorothy Gale might not have been itching to leave Kansas after “The Wizard of Oz,” Sam can’t do anything but rail against it. Even as she does, a question grows more pressing: Is it really the location that’s a trap, or Sam’s own feelings? In Everett’s hands, Sam is someone you either know or are. She forgets to put on pants before she screams at her neighbors; she stresses out when she’s invited to brunch because it turns out to be a group activity. Holly’s death gives Sam a reason to be alone, but it’s not the reason she’s alone.

If you’ve followed the comedy world, or seen her underrated performance in 2017’s “Patti Cakes,” then you know the power Everett brings as a performer. It’d be easy for the audience to see Sam as someone who’s just lazy, and that’s far from the case. She’s unmotivated. She’s unhappy. And the series skillfully shows Sam’s growth in a way that always feels organic.

Everett is why Sam is so wonderful to be around. She’s funny, she cares about people, and she can belt out a Janis Joplin song like it’s nobody’s business. But Sam isn’t free of the slings and arrows of people who don’t know how much they hurt her. Case in point: Sam’s sister, Tricia (Mary Catherine Garrison), who routinely brings up Sam’s perceived laziness, her issues with her weight, and her dislike of Holly’s homosexuality.

Sam’s salvation is found in Joel, a sweet-tempered gay man confused about where his faith fits with his personal life. Joel invites Sam to what he calls “Choir Practice,” a place for outcasts and friends to mingle in a church Joel where volunteers. It’s this invitation that is the catalyst for each one of them finding what they need in the other. Everett continues to show why she’s a star in the making, but don’t underestimate Hiller, who is equally fantastic as Joel.

Hiller’s facial expressions can induce a laugh, but the true genius of his performance, like Everett’s, is in his humanity and authenticity. Whether that’s helping Sam follow around Tricia’s husband or surviving a tornado while chasing a dog, Joel makes you laugh and feel in equal measure. Speaking of, it’s early but I don’t know if anything will compare to Episode 5 of this series. Everyone is on point and it’s so hilarious that I’ve already gone back and watched it twice.

Everett and Hiller are the dominant forces within “Somebody Somewhere,” but the supporting cast is compelling. Garrison, Mike Hagerty, and Jane Brody as Sam’s family cause plenty of cringes in their dysfunctional dynamic. Hagerty and Brody, as Sam’s parents Ed and Mary-Jo, are especially intriguing as they’re broken people who hide the pain in different ways; Ed tamps everything down while Mary-Jo drinks to the point of running her husband’s foot over and nearly lighting her niece on fire. The loss of Holly ripples through the entire family, and though the series never chronically brings it up, her demise is at the center of every glance, every slight, every story.

“Somebody Somewhere” is a hard show to describe, not in terms of plot but of feeling. It’s small-town setting doesn’t rely on stereotypes but is genuinely reminiscent of numerous towns adjoining big cities. (I’m fairly certain every suburb has a knick-knack store like Tricia’s Tender Moments.) The situations are just high-stakes enough to belong on a television show, but found underneath them are moments of darling connections, like Sam learning Joel’s a “birder” because he carries binoculars in his car. If you’ve ever just driven around with your bestie on a Sunday looking for something to do, and what you did was boring but you two connected, “Somebody Somewhere” captures the singularity of that experience.