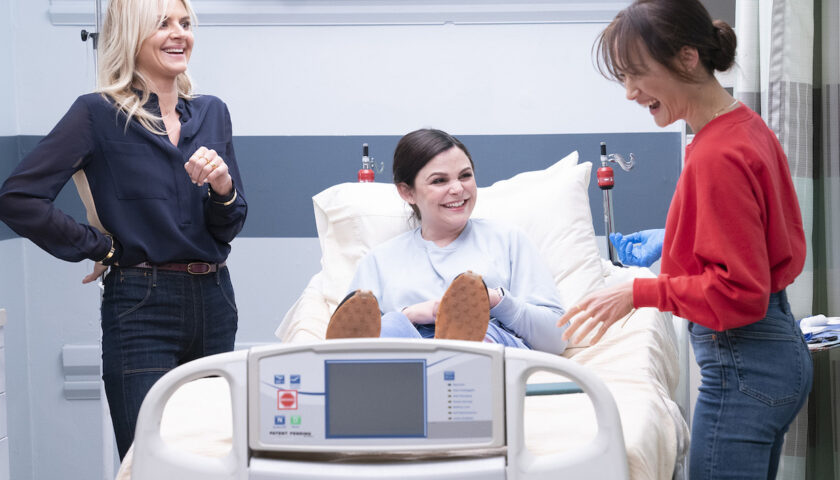 Amy (Eliza Coupe) is saying this to her friends Jodie (Ginnifer Goodwin) and Sarah (Maggie Q) because it’s the day of Coleen’s funeral and whoever did her makeup overdid things. Coleen, who was part of this friend group since they were all kids on Long Island, died of cancer, and it’s freaking the remaining three women out.

As they drink to her honor after the funeral — after Amy gives her husband Henry (Tommy Dewey) strict orders on how she is to look at her funeral — the three of them vow to make changes in their lives, because Coleen’s death has shown them that life is short.

Amy, who works as a morning show producer at a local Long Island station, vows to spend more time with her kids. Even though she has a stressful job, it does end in the early afternoon, but she somehow kept herself occupied and let their nanny care for them. The nanny is shocked to see Amy at home so early, and her older son is happy to see his mom “visiting.”

Jodie, who is married to an indifferent husband and has three teenage kids who ignore her, wants to get in better shape. But her motivation isn’t just for herself; she is enamored with her new personal trainer, Matt (JT Neal), who calls her things like “beautiful”. When he tells her he wants a picture of her in her skinny jeans, she tries to wedge herself into them, but calls Amy for help. Amy takes the kids and brings them over, but realizes she didn’t bring any diapers when her toddler daughter has a blowout in the car.

Sarah is a doctor who is tired of her stressful job. A divorce from her wife, who cheated on her with their chiropractor, has added to her stress levels. So she suddenly quits her job at the hospital and, somehow seeing happy people working in her local supermarket, applies for a job there.

Sarah also comes over to help Jodie get out of her jeans. Amy tries to cut them off but ends up stabbing Jodie in the leg instead, sending them to the ER.

What Astrof has managed to do with Pivoting is take a pretty simple premise and make it work via smart casting. All three leads have good chemistry with each other, and it’s no problem seeing them as lifelong friends. The writing itself can be sharp, but in the three episodes Fox provided, it was a bit of a bumpy ride as far what was funny and what wasn’t.

The first episode hits on all cylinders because we’re just seeing the three women at the beginning of their quests to better themselves. Coupe, who plays uptight and driven with the best of them, is particularly funny rolling her eyes at the factoids her son Luke (Marcello Reyes) spews out or the competition she seems to have with the nanny for her kids’ affections. There’s a reason why she’s paired with the easygoing Dewey as Henry. He has his quirks, but he balances her out.

The other two stories have less potential for long-term success, despite the valiant efforts of Goodwin and Maggie Q (in her first sitcom, as far as we can tell) to sell us on them. Goodwin’s character deserves a better storyline than having a crush on her much younger trainer. At some point she either has to go for it or move on or the constant flirtation and schoolgirl mooning over this guy will get old in a hurry.

Maggie Q’s story is a little more of a conundrum. It seems unrealistic that Sarah would really quit medicine to work as a bagger at a supermarket, especially since it seems like she has given her wife most of the assets in the divorce. Find a less stressful position, or start a private practice? Maybe. But having her work in a supermarket just serves as a vehicle for her to make jokes about how she can do complicated lifesaving procedures so she can handle putting items in a bag.

In one episode, a colleague bullies her because she’s so detail oriented and the other friends not only confront the bully but urge Sarah to relax. Part of that is to take a hallucinogenic gummy and dig up a fig tree in her old yard, where her ex now lives. It’s kind of funny but more chaotic than anything else, and still doesn’t address the whole “how in the hell is Sarah going to make a living?” question.

But the camaraderie among the three women is so much fun to watch that we hope Astrof gets some time to figure things out around the show’s edges.