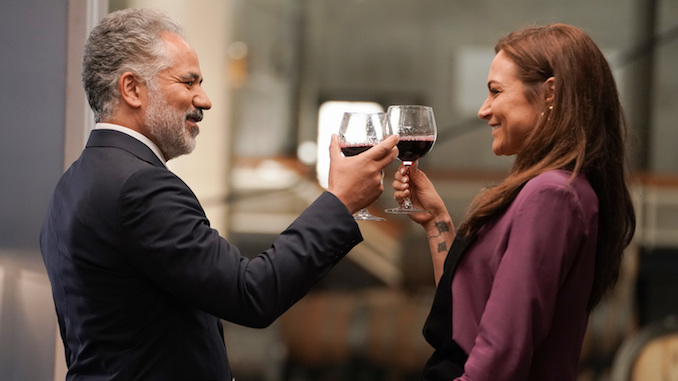 “Promised Land,” Matt Lopez’s new ABC drama, makes the most of its 44 minute runtime. Barely a scene goes by without a reveal, or at least a dramatic music cue hinting at a reveal soon to come. It has a sprawling cast spread across two timelines that intersect in a way that sets the show apart, but which ABC nonetheless has barred coverage from mentioning before the show’s Monday premiere. Over the course of the first two episodes screened for critics, “Promised Land” explores the promise and poison of the American dream — a typical lens through which to view wealthy dynasties, but one that has more pointed resonance on this show, which specifically centers Mexican and Mexican-American characters. With beautiful shots of southern California deserts and vineyards, heightened acting, and a sweeping score by Gustavo Santaolalla and Kevin Kiner, “Promised Land” immediately distinguishes itself.

The pilot introduces two storylines: one about Mexican teens (played by Katya Martín and Andres Velez) risking everything to cross the border into the United States to work at a near-mythical vineyard, and another about the rich and powerful people who own it (or, in the case of Bellamy Young’s patrician character, the rich and powerful people who once owned it and vow to own it again). The vineyard’s ruling Sandoval family, headed up by Joe (John Ortiz) and Lettie (Cecilia Suárez), looks to the land’s future while remaining haunted by its past. Ortiz, Suárez and Young are pros, so watching them circle each other like sharks is plenty entertaining. And as the anchors of the other storyline, Martín and Velez bring depth and warmth to some of the show’s weightier material.

Meanwhile, the new generation of Sandovals — played by Christina Ochoa, Augusto Aguilera, Mariel Molino, and Tonatiuh — scramble to find their places within the family and its business alike. “Promised Land” gives each their own history and motivations in record time; look away from one of their scenes for even 30 seconds, and you just might miss some wild new wrinkle that changes everything. The speed with which the series introduces these complications might be necessary for a broadcast drama with plenty of competition, but it also quickly makes becomes confusing than intriguing.

As befits its chosen genre of the juicy family drama, in which overlapping secrets become ticking time-bombs the moment they’re uncovered, “Promised Land” is a big and messy show with so many avenues to go down that it sometimes has trouble choosing which should matter most. But there are worse sins for a show to commit than having many worthy stories to choose from, as long as it eventually leans into what works and cuts down on what doesn’t.