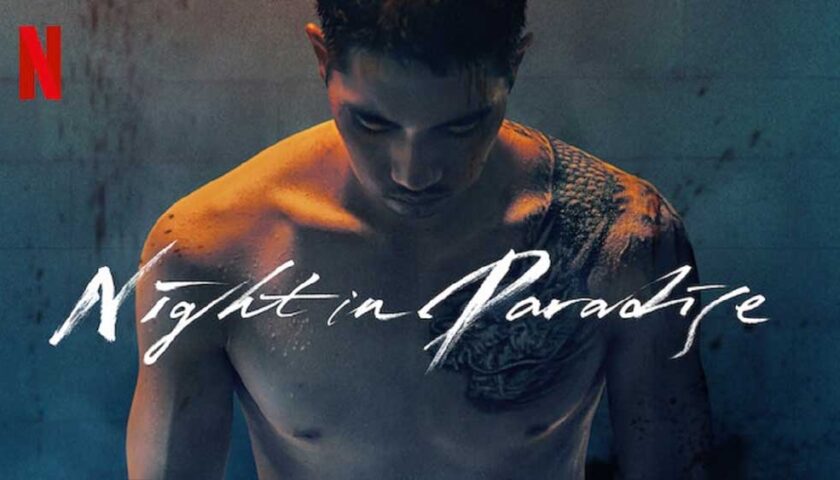 Premiering at Venice film festival last year, Night in Paradise left a mostly positive impression on those lucky enough to catch the screening. This, together with the fact it was directed by Park Hoon-jung, marked it as an item of interest for us genre fans. Well, now that it has finally been released worldwide, I’m glad to say that the wait was worth it. It’s not top notch in every aspect, unfortunately, but the overall feeling is that of satisfaction.

This is a prestigious looking gangster drama in the vein of modern Korean genre hits like A Dirty Carnival or A Bittersweet Life. It begins with Tae-gu, a right-hand henchman for gang boss Yang, commiting an act of violence against a rival gang. Since Yang didn’t approve it, Tae-gu is forced to leave for Jeju island to lay low and await further orders from the boss. There he also meets Jae-yeon, a lonely girl suffering from a mysterious disease…

This initial setup contains many elements you may have already seen; a brooding young gangster, slick and treacherous gang bosses about to start a war, knife-wielding action, a potential romantic partner and so on. It’s all familiar, but rendered with a lot of care by Park, who is becoming an increasingly refined visual stylist. In terms of plot and pacing, however, there are a few setbacks. The story is presented in a low-key fashion with bursts of violence sometimes verging on extreme. This creates an interesting dynamic given that it demands more patience than a typical gangster film would. On the other hand, some scenes do seem drawn out as a result. Add to that the film’s long-ish runtime of approximately 130 minutes and you have an uneven mix of brutal action and quiet drama that won’t be to everyone’s taste.

Personally, I’d say it’s peculiar enough to seem fresh, but it also ticks all the expected boxes that lovers of Asian crime thrillers anticipate. Thus I believe that many of you will be satisfied by much of what it has to offer, be it melancholic ruminating or intense action. The latter is demonstrated in some great looking setpieces that will keep you on the edge of your seat, so don’t think Night is just about staring into the sunset with a cigarette in hand.

Overall, this is a solid crime thriller that marks another successful entry in Park’s genre-based filmography. Give it a chance.