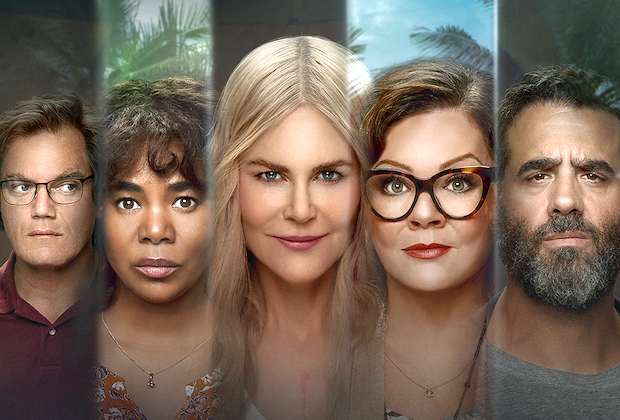 The greatest trick Adam Sandler ever pulled was getting major Hollywood studios to finance vacation trips for him and his professional family to the likes of Hawaii (50 First Dates), Africa (Blended), rural Massachusetts (Grown Ups) and the ’80s (The Wedding Singer) under the guise of “moviemaking,” often without any evidence of a script.

The Adam Sandler Method, it turns out, was actually the ideal framework for COVID-19 shooting as well. Take a containable ensemble of actors, preferably with some familiarity with each other and/or the creative team. Descend on an equally contained location, preferably one where people are happy to be quarantined for a couple of months. Pray that by keeping the circle of trust small, the chances for contamination are small as well.

The latest TV production utilizing the Adam Sandler Method, down to the half-baked shooting script, is Hulu’s Nine Perfect Strangers, which transported a dazzling group of A-list stars to isolation in Australia for what looks to have been a fine journey of scenic vistas and over-emoting about self-help.

The cast of Nine Perfect Strangers is too good for the limited series to ever be unwatchable. But after seeing six of eight hour-long episodes, I’m pretty sure the biggest mystery has nothing to do with any of the damaged characters; it’s whether anybody involved realized that, by virtue of sheer bad timing, the thematically anemic show would inevitably be reduced to White Lotus for Dummies.

Adapted by David E. Kelley and John Henry Butterworth from Liane Moriarty’s 2018 novel, Nine Perfect Strangers begins with nine people heading to a Northern California wellness retreat dubbed Tranquillum House. That they aren’t perfect — each guest has some form of trauma or deep unease that they’re working through — is low-level irony, but they’re not really exactly all strangers either. There are the Marconis — Napoleon (Michael Shannon) and Heather (Asher Keddie) and daughter Zoe (Grace Van Patten) — at Tranquillum to work through grief. Jessica (Samara Weaving) and Ben (Melvin Gregg) are hoping for last-ditch marriage counseling.

Then there are the actual strangers, bestselling author Frances (Melissa McCarthy), plus grouchy Tony (Bobby Cannavale), erratic Carmel (Regina Hall) and squirrelly Lars (Luke Evans), whose professional identities are treated here like twists, even if they’re not.

Tranquillum is dedicated to fundamental change and an assortment of experimental therapies somewhere between summer camp (potato sack races), a mental hospital on a Ryan Murphy show (a so-called “protocol” I won’t spoil) and miscellaneous New Age-y hokum (digging your own grave). The process is overseen by counselors, including Manny Jacinto’s Yao and Tiffany Boone’s Delilah, under the constant watch (surveillance, really) of Masha (Nicole Kidman), who boasts her own story of rebirth.

There are a lot of things that are treated like twists but aren’t, pointing to a narrative structure that’s more a math equation — a 10-day retreat for nine strangers told over eight episodes — than the Agatha Christie-style parlor mystery you might crave. The show simply doesn’t know what it wants you to invest in, or why. It surely isn’t in the threatening text messages Masha is receiving, nor in seeing which characters get the healing they need, because they’re mostly secret-keeping composites with no emotional hook other than whatever affection you have for the actors coming in. Beyond that, the episode-to-episode stakes include “What will the guests get for breakfast?” and “Who’s hallucinating now?” There’s no suspense or visceral charge to any of it.

The collaboration between Kelley and series director Jonathan Levine (Long Shot) is logical, as both are capable of slipping back and forth between drama and comedy. But in this case, the partnership is ill-fated, as both are also capable of not necessarily keeping clear control over that tonal balance. The series’ approach to self-improvement, wellness and the modern condition tends more toward the comic side of the ledger in ways that mock ridiculous and legitimate cures equally, without offering much enlightenment on actual human behavior. From addiction — drugs, social media, etc. — to imposter syndrome to the complicated nuances of mourning, the people in Nine Perfect Strangers are dealing with real stuff in a way that lacks any gravity at all, much less satirical edge.

It doesn’t help that the performances feel like they’re coming from at least a half-dozen different shows. It’s as if the characters were guests at a murder-mystery dinner party, and instead of receiving pieces of paper telling them if they’re the killer, they each were given a note reading either “Drama” or “Comedy” and instructed not to tell anybody else what they were doing.

Your favorite performances will probably be determined by who is operating on the wavelength you wish the rest of the show was on. Weaving, quickly building a resumé on comic timing that allows her to combine broad expressiveness with razor-sharp precision delivery, was probably my favorite. That’s mostly because she, like the unusually relaxed Evans, would be perfectly at home in the actually pointed satirical world of The White Lotus, which asks viewers to judge the characters and then forces us to reevaluate rather than informing us upfront that nobody is how they seem.

McCarthy and Cannavale are straight out of the sort of quirky indie rom-com that would open or close Sundance not because it’s good but because it has stars. The Marconi family is awash with inner acting conflict: Shannon plays his torment and eccentricity way on the outside — thanks to karaoke, he’s practically in a musical — while Van Patten’s solid underacting frequently gets lost entirely. Hall is mugging like she’s in a sitcom and Jacinto is aiming for a quiet, hunky level of Zen that reminds you he’s not in a sitcom anymore.

Nobody’s doing more than Kidman. It’s my hunch that most truly enigmatic people don’t think of themselves as enigmatic, but every choice Kidman is making — from beatific smiles to a Russian accent best described as “occasional” — is visible and borderline silly. After the second season of Big Little Lies and then The Undoing, one senses Kelley is committed to giving Kidman interesting actorly things to do, but not always coherent parts.

Levine shoots Kidman in a perpetual hazy glow — a choice to accentuate her angelic or otherworldly qualities that is one of the few clear visual motifs that the director, not really known for distinctive aesthetics, imposes here. He also treats the morning smoothie/buffet rituals with preparatory brutality — pulverized fruits, crushed ice, quivering oatmeal — that calls to mind the Dexter opening credits rather than an attempt to make a clever point about human psychology or a juxtaposition with the otherwise pastoral setting. Thanks to the occasional waterfall, verdant field and architecturally interesting interior, Nine Perfect Strangers barely avoids feel like a bloated stage play. Barely.

With two episodes unseen, Masha could still be revealed as an alien, a robot or a sincere health care professional. The only reason I’m curious to stick around and find out is to see if the finale justifies why so much talent wanted to be a part of this series. Perhaps a paid vacation in uncertain times was sufficient lure, and Adam Sandler had it right all along.