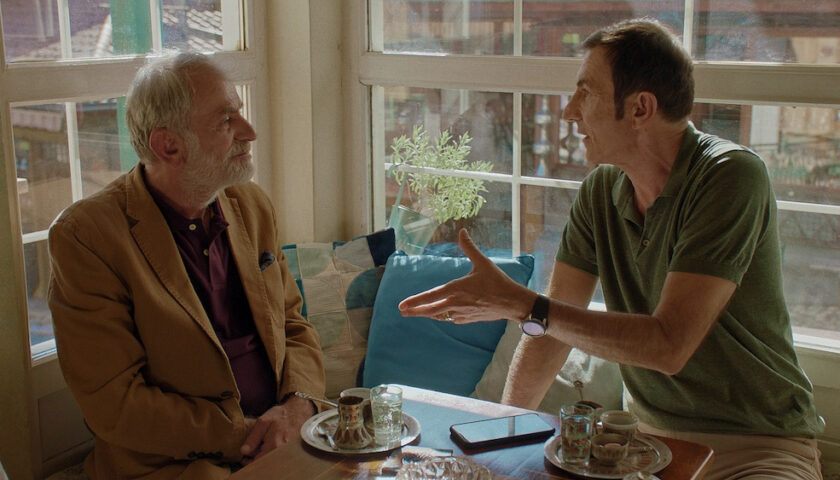 Oscar-winning filmmaker Danis Tanović (“No Man’s Land”) delivers a tasty treat with the entertaining, comic drama “Not So Friendly Neighborhood Affair.” Despite being a low-budget item shot during the pandemic and finished in haste, with the visual style of a TV film, it nevertheless warmly and wittily captures the spirit of the Bosnian capital and its struggles with COVID-19. Set in the city’s iconic Old Town, it’s the tale of two neighboring ćevapi restaurants whose once-friendly owners fall out. The deterioration of their friendship affects the romantic relationship of their children and the whole tenor of the local quarter. TV stations and streamers in the region should eat this up, as should festivals with a foodie strand.

As almost any non-vegetarian visitor to central Sarajevo will tell you, where to find the best Bosnian ćevapi is a critical question. This prime example of the local cuisine is made of two types of minced meat, hand-mixed and put through a funnel to give them their distinctive look of meat fingers. They are grilled and served with somun, the traditional Bosnian flatbread, and usually sides of onions, yogurt or kajmak. The film’s original title translates as “10 and a half,” meaning 10 pieces of the grilled meat and a large half of the bread.

Impulsive self-promoter Enes (Branko Đurić) feels confident that he has the best ćevapi in town. Before the pandemic shut things down, he borrowed money to expand and refurbish his restaurant and leased an expensive new car. Although already dangerously in debt, he wants to find additional quick money to buy some German equipment that will allow him to roll, pack and freeze ćevapi for export.

Enes tries to interest his longtime pal, neighboring restauranteur Izet (Izudin Bajrović), in his plan, but the cautious widower tells him, “It’s not smart to go into business with friends. You fuck up either the business or the friendship.” Izet remains content with his smaller restaurant and smaller volume of business.

Besides, Izet’s mind is on his daughter Lana (Helena Vuković), who just returned from Germany with a master’s degree in culinary art. He hopes she will take over his restaurant and allow him to retire, but the health-conscious young woman has dreams of her own. Even worse (where the majority of carnivorous Bosnians are concerned), she reveals that she has stopped eating meat, a situation that helmer Tanović exploits for humor.

Lana’s ambitions for a restaurant of her own in Germany also put her at odds with her boyfriend Orhan (Kerim Čutuna), the son of Enes. The still-immature Orhan believes that Sarajevo is the best city in the world and has no desire to live anywhere else.

When the Croatian vlogger Gordana Matić (Anja Matković), a much-followed food influencer, comes looking for Sarajevo’s best ćevapi, the self-involved Enes has no clue about who she is and directs her to Izet’s place instead of opening his own for the sure exposure hosting her would generate. Soon, her online review causes the long lines that once graced Enes’ restaurant to form across the street.

Tanović and co-writer Nikola Kuprešanin etch the new frostiness in Enes and Izet’s relationship through multiple scenes at the local coffee shop operated by the burly, constantly cleaning Jasa (the excellent Goran Navojec). Jasa gets some of the film’s best lines too, including the comedic line, “I wash my hands so much that formulas from high school physics are coming out.” Along with a running joke involving a photo of Izet’s father, the screenplay smartly uses the protocols of the COVID-age to provide comedy and personality detail, with some characters more inclined to respect masking and social distancing than others.

Although Vuković and Čutuna don’t generate much chemistry as the romantic couple, their fathers easily convince as longtime friends, with the understated, self-sacrificing Bajrović particularly good. Characterful performances by the older supporting cast, especially by Almir Palata as Enes’ put-upon cook, round out the film, as do cameos by regional celebrities.