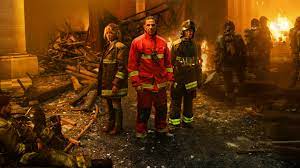 *Disclaimer: I only watched the first three episodes. Couldn’t stand it any longer*

I accept that there are some things you have to do differently in a TV Show than it is in reality to keep all viewers hooked. However, in a TV Show thats claims to be based on real reports and follows Fire Fighters on a real event, I expect basics to be real and to see some realism. As a firefighter myself, I was in physical pain watching this. Here are some of the things which are totally wrong:

In the german synchronisation, important technical terms are wrong. It’s “Strahlrohr” not “Spritze” and “Truppführer” not “Truppchef”.

Besides this, there are other problems. The show has too many characters which are too unpersonal. I don’t care what happens to them, so I am emotionally completly out. In addition, I don’t really get the time jumps, imo they are only there to make the show longer.

What the heck is the story of this black little boy supposed to be? He is behaving absolutly stupid and is totally annoying. Nearly as stupid is the story of the journalist. I can’t imagine this to have any real base. What she does is wrong under every aspect. Why are you promoting this as based on real reports if basically everything can’t be real or everyone was TOTALLY unprofessional if it really happend like this.

The acting performance of some actors is… well, mediocre at best. For example the one Fire Fighter in the control room. He sees his old love after six or seven years and shows no reaction.

All in all, this has nothing to enjoy, ecxept the good production quality. A real waste of my time.