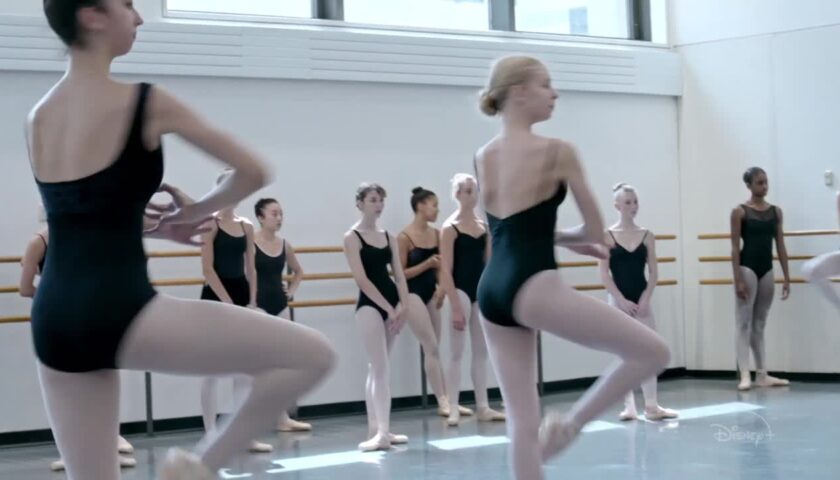 Kids can learn ballet in most cities across America and nearly every major city has their own annual production of The Nutcracker. But the man responsible for popularizing the annual holiday tradition in the United States was George Balanchine and his version, put on annually in New York City, is still the creme de la creme of American ballet productions. Children cast in this annual holiday tradition take lessons at the School of American Ballet (SAB) and in On Pointe, a six-part documentary series streaming on Disney+ starting December 18th, viewers can see what it takes for these dedicated performers to make it to the stage.

Filmed during the prestigious school’s 86th year, the series chronicles a season at the school, following a handful of students between the ages of 8 and 18 as they balance achieving their life’s dreams and going to school. For the youngest kids, attending SAB classes is something they do multiple nights per week after attending regular schools. In the intermediate and advanced division, there are 64 students who live in dorms at the school, attending either the nearby Professional Children’s School with flexible schedules for kids in the arts or online school.

The focal point of the narrative may somewhat rely on the upcoming performance of George Balanchine’s The Nutcracker, but for the intermediate and advanced teenage students who don’t get to participate, a counternarrative emerges about life after SAB. Kids auditioning and rehearsing for the holiday performance are juxtaposed against older students auditioning for ballet companies across the US and hoping for a coveted apprenticeship with the New York City Ballet.

Produced by Ron Howard and Brian Grazer from Imaginer Documentaries, the subject of On Pointe may draw comparisons to reality shows like Dance Moms, but they couldn’t be more different. On Pointe is about the dedication, commitment, and hard work required to become a paid professional in a field that’s all about discipline. The kids feel genuine and relatable and the parents are supportive of their child’s dream, but far from the stage moms and dads you might be expecting.

On Pointe arrives on Disney+ at the perfect time when many families would be supporting their nearest professional ballet by seeing their production of The Nutcracker. The series not only takes you backstage, but also features clips from the show. And if it makes you yearn to see the full show. I give On Pointe 4 out of 5 dorm room Pokeballs. On Pointe starts streaming Friday, December 18th, on Disney+