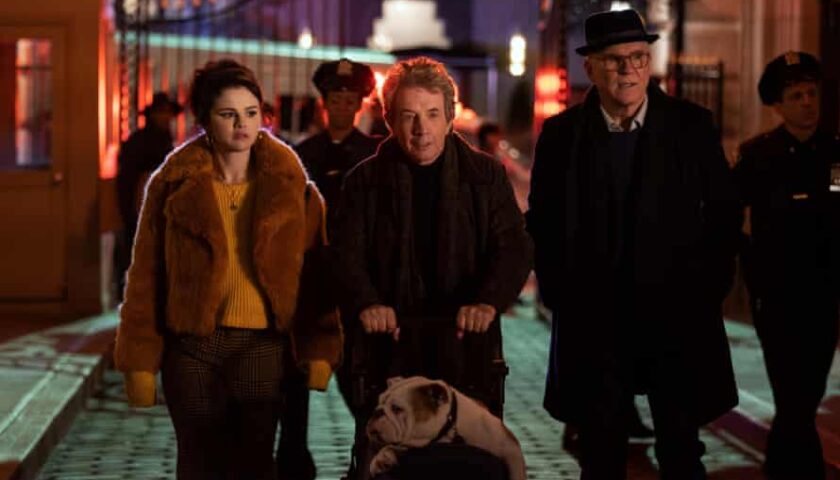 When three neighbors crash a crime scene mere minutes after it was first discovered, it doesn’t take much longer for a cop to realize what’s going on with them. As Charles (Steve Martin), Oliver (Martin Short), and Mabel (Selena Gomez) barely contain their morbid enthusiasm, the exhausted officer (Da’Vine Joy Randolph) rolls her eyes. “Okay,” she sighs, “what fuckin’ murder podcast are you all listening to?”

She’s not wrong (and in Randolph’s hands, she’s not the cop cliché she could’ve been, either). The unlikely trio only bonded over their mutual love for a “Serial”-esque series that same night, as they waited out their Upper West Side apartment building’s fire alarm with wine and wild theories. But they’re not about to admit it in this moment, which holds the possibilities of letting them level up from true crime fans to amateur detectives.

Their subsequent adventures, alternately screwball and soulful, make up the bulk of “Only Murders in the Building,” Hulu’s upcoming series that marries Martin and Short’s comedy with more sinister murder mystery beats. This sometimes results in flat parody of the grisly and often exploitative true crime series that inspired it, especially when Tina Fey pops up as the acerbic host of their favorite show (“All’s Not OK in Oklahoma”), a character who feels ripped from the bizarro New York of “Unbreakable Kimmy Schmidt” rather than this one. Otherwise, “Only Murders” is at its best when it’s not mimicking a genre so much finding a sweet spot of its own where it can be funny, strange, and sympathetic all at once.

Co-created by Martin and John Hoffman, “Only Murders” delights in its many (rather predictable) twists, but moreso in the chemistry between its three leads. That Martin and Short immediately click into a partnership that’s as amiable as it is prickly should be no surprise to anyone who’s experienced them as a pair in the “Father of the Bride” movies, in which they play similar roles opposite each other (i.e. Martin as the outwardly grounded voice of reason who quickly spirals out of control and Short as the already histrionic wild card). Gomez, whose character has more ties to the mystery than meet the eye, gets the more obviously weighty material at the series’ start, and does her best to make the most of Mabel’s scattered exposition. But she, too, shines brightest when playing detective alongside Short and, especially, Martin. Oliver has his melancholic moments, but Mabel and Charles’ friendship becomes richer as their equal skepticism of being vulnerable blossoming into a shared experience of learning to trust each other, anyway.

The intricacies of the people and setting of “Only Murders” are what ultimately make the show such a pleasure to dive into, and so easy to marathon without necessarily intending to. (I watched all eight episodes I had the same night I started, and am impatient to get the final two — which, I acknowledge is a luxurious problem to have, given that the first three will premiere Aug. 31 on Hulu before episodes drop weekly.) The cast of Upper West Side characters feels both familiar and specific, including deli kingpin Teddy (a perfectly calibrated Nathan Lane), his watchful son Theo (James Caverly), and resident oddballs like furious cat owner Howard (the reliably funny Michael Cyril Creighton) and a perpetually cranky neighbor played with acidic precision by Jackie Hoffman.

Each apartment of the Arconia — the building in which Charles, Mabel and Oliver all live — is its own ecosystem, production designed within an inch of its life to convey the story of the person who lives, or lived, there. Visiting Charles in his economic flat introduces a different vibe than visiting Oliver, whose inherent theatricality spills over into his lush suite. When Charles lets his guard down and shares an evening duet with an intriguing bassoonist (Amy Ryan) who lives across the way, they share smiling eye contact as their music echoes around the interior courtyard, a genuinely lovely scene that needs no dialogue to sing.

Structurally, “Only Murders” is beholden to the general arc of true crime stories even as it attempts to address and dismantle its tropes. (In one memorable moment, Mabel has to remind her excited compatriots that they are, in fact, investigating the murder of an actual human person.) The series is most interesting when it demonstrates willingness to take a few risks outside that format to the benefit of its performers. Oliver’s fantasies of finding the killer as if he’s casting the lead of a musical let Short go as big as he wants, while Charles looking behind his shoulder for startling specters of regrets past allow Martin to more fully embody his bittersweet character. A later episode centered on Theo, who is deaf, unfolds almost entirely without sound, an opportunity Caverly and ultra expressive actors like Lane, Martin and Short seize to smart effect.

So even when “Only Murders” doesn’t quite hit its mark or opens a door to reveal exactly what you might’ve expected, it’s often quick enough to try something else that works much better. Like its excitable new detectives, the show is clever and gently weird enough to make an impression.