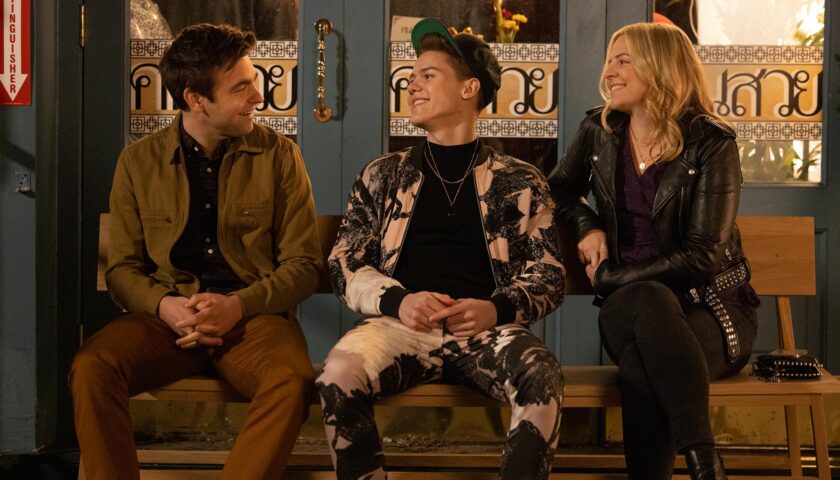 In our ever-shifting TV landscape, audiences are becoming more and more accustomed to long gaps between seasons. COVID obviously hasn’t helped matters, but even before the world generally turned upside down, it was standard operating procedure for shows from a certain stature of auteur — think Noah Hawley on Fargo or Donald Glover on Atlanta or Larry David on Curb Your Enthusiasm — to adopt an “It’ll be back when it’s back” airing pattern.

Because Curb once went six years between seasons and Atlanta will be nearing four by the time it returns, it doesn’t seem like such a big deal that The Other Two is verging on two and a half years since its first round of 10 episodes concluded back in March of 2019. It’s one thing to leave your audience hanging when you’re already an Emmy-winning piece of the zeitgeist. It’s another, though, to disappear when you’re a fragile comedy with a cult following and a probably desperate need for momentum.

It’s almost best to approach The Other Two as a new show, especially since it was transplanted to HBO Max after originally launching and actually being quickly renewed on Comedy Central. Then again, based on the first six episodes of the second season, it’s very much the show it was in the first season, with the burst of laugh-out-loud punchlines and the many inconsistencies. The layoff and the move to a new outlet haven’t led to creative stagnation, nor have they opened the door for a creative leap. Chris Kelly and Sarah Schneider’s series still isn’t a show aimed at a wide audience, but it’s a show with an uncanny laser focus on its core demo.

If you don’t remember where season one of The Other Two left things for the Dubek clan, you really don’t need to. In the aftermath of his embarrassing VMAs performance, Chase (Case Walker) has gone from famous to notorious, which is OK because he doesn’t need to be the family breadwinner anymore. Mother Pat (Molly Shannon) has become an apparently wildly successful daytime talk show host, spurred by a series of repeatable catchphrases and her proud desire to talk about her kids on air. Older sister Brooke (Heléne Yorke) is scouring TikTok looking for the next ChaseDreams to advance her managing career, while older brother Cary (Drew Tarver) has a suddenly semi-lucrative career as the token gay host on sites like BuzzFeed, Thrillist and BagelBitesTV. Neither Brooke nor Cary is exactly happy, but Drew has a boyfriend (Gideon Glick’s Jess), which he thinks counts as happiness in the short term.

Given the show’s popularity within a certain audience, it’s vaguely astounding how much less cameo-driven the second season is. Sure, they get The Bachelor gadfly Derek Peth (who I had to look up to make sure he was a real person) and Gossip Girl co-star Tavi Gevinson (in a generic part that seems to have been written for “semi-famous person we could get on short notice”) and a few others, but after the first season, in which nearly every episode contained appearances by various well-known media personalities or Kelly and Schneider’s former SNL colleagues, this constitutes either restraint or else a COVID-induced limitation.

I’d interpret it as a point of maturation. The same might be true of a move away from the show’s initial insistence on running its best jokes into the ground through repetition or over-explanation. The show is still aggressive in its run of hit-and-miss dialogue, but I’d say there’s more confidence that if one line or gag falls flat (or even works), it’s OK to just move on to the next one. It can still be exhausting, as in an episode in which Cary and Jess go apple-picking, which instigates a run of HGTV/Instagay jokes that start funny but never escalate in a way that really works. More frequently, the show just finds its audience-pandering target — everything from the thankless life of a Hollywood manager to the less-than-glamorous life of a TV recapper to the name-checking of various Hadids — and fires willy-nilly before moving on to the next one.

There’s also some maturation in the characters; the show’s longevity depends on character-driven humor, not just winking references to the disposability of streaming television or catty references to Riverdale. Shannon is a more steady presence throughout the season, and, through tweaked situations or writing, Pat has become a sympathetic figure. In a show about narcissists, Pat’s fixation on her kids — not just Chase but “the other two” as well — is a little sweet and a little sad. I think there’s a trade-off and that Shannon isn’t getting to be as silly and self-absorbed as in the previous season. Those are two qualities she plays wonderfully, but maybe she’s giving the show a grounding it didn’t fully have in the first 10 episodes.

The last two episodes sent to critics for this season — one featuring Chase’s indoctrination into a familiar industry-centric religious cult and the other with Cary and Brooke eying professional breakthroughs — were my favorites from this batch, highlighting how good Yorke and Tarver can both be when their characters aren’t pits of self-absorption. Like so many shows fueled by myopic cringe comedy, a dash of heart and introspection can mark the difference between being a decent acquired taste and being very good (or great). It’s the progression that Schitt’s Creek made after its first season. And since I see a lot of tonal similarities between the two shows, it’s a smart shift in direction for The Other Two.

Those are little adjustments that could reflect my own expectations and changing temperament as much as any changes in the show. I doubt fans will notice anything different other than a few extra minutes per episode, a tiny bit more swearing, and perhaps a hair more sexuality. But really, those fans will just be happy, after all this time, to have The Other Two back at all. Some people had probably given up hope.