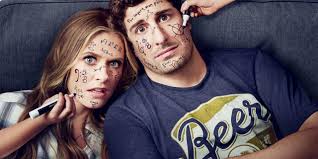 The latest variation on network sitcoms’ beloved “a family, but with [x complication],” Fox’s “Outmatched” flips the usual parent-child dynamic on its head by following an Atlantic City family, including three bonafide genius kids who are too smart for their bewildered parents to understand. Each time one of their children tests off the charts, Mike (Jason Biggs) and Cay (Maggie Lawson) groan in preemptive exhaustion, imagining all the highbrow projects and questions their progeny will have for them that they, in turn, have no idea how to handle. They, as every other joke reminds us with the bluntness of a neon billboard, are just too dumb to keep up.

From prolific sitcom producer Lon Zimmet, “Outmatched” does have some sharp moments, especially when it sits in the uniquely weird disconnect between parents and kids who share few interests, or underlines the difference in how the capital g “Gifted” children (played by Connor Kalopsis, Jack Stanton, and Ashley Boettcher) interact with the world versus how Leila (a scene-stealing Oakley Bull), the youngest and seemingly average kid, does. And while Biggs’ character is a basic mashup of countless sitcom slacker dad stereotypes, Lawson’s performance reveals shades of something more interesting in Cay, a former mean-girl-turned-mom and casino pit boss whose disdain for weakness is palpable in every scene.

But for the most part, “Outmatched” leans on the most obvious punchlines in order to sell itself; there’s rarely a joke that doesn’t end up exactly where you expect it to the second someone tees it up. And even though Biggs and Lawson are both able comic performers who can sometimes find new gears in the oldest setups, they keep getting stuck in lines that land with a thud no matter how much they try to keep them afloat with sheer charisma. There are decent bones for a more unique sitcom lying underneath all the clichés, but “Outmatched” will need to lean into its own potential for strangeness in order to find them, and hopefully, won’t take its time doing it.