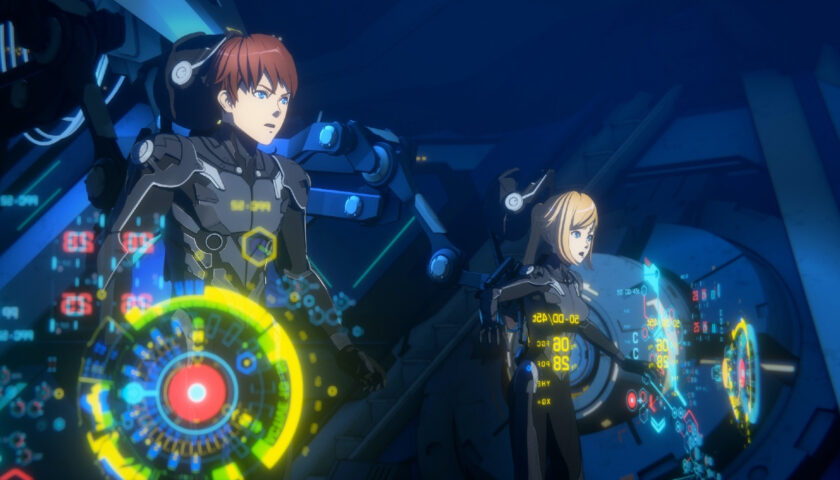 No reasonable filmgoer came away from a screening of Guillermo del Toro’s 2013 film Pacific Rim or its 2018 sequel (directed by Steven S. DeKnight) thinking, “You know what that needed? More lore.”

Lore, in this case, referring to the capacious and internecine in-story mythology the franchise created for itself, which featured but was not limited to: Kaiju (towering monsters bent on humanity’s destruction) who came from The Breach (an interdimensional portal at the bottom of the Pacific Ocean) and who were sent by the Precursors (extraterrestrials who wish to terraform the Earth for colonization), and the Jaegers (towering mechs that represent humanity’s last hope) which are powered by two or more pilots who must enter The Drift (a shared mental plane of existence) by establishing a Neural Handshake (pretty much what it sounds like, I’m not gonna do all the work, here, people) allowing them to share the mental strain of piloting the giant machines.

And all that’s before you get to things like Hybrids (never mind) and Secondary Kaiju Brains (long story) and Mega-Kaiju (pretty self-explanatory, come on).

But all of that hilariously dense jargon and po-faced backstory served a purpose, or tried to — it centered the franchise within a context of an elaborately and carefully built world, so we could take it in and begin to half-convince ourselves that watching giant monsters punch giant robots, and vice versa, for two hours at a time was something more than what it was: a rich, gooey and delicious serving of mech and cheese.

The central, abiding cheesiness of it — the way so much money and effort had been spent to remount the low-fi afterschool UHF pleasures of Ultraman, The Space Giants, and Johnny Sokko and his Flying Robot — was the whole point. Sure, the formula had been tweaked with plasma cannons and mecha-swords and EMPs, and the balsawood buildings had been swapped out for pristine CGI cityscapes, but the effect was the same.

And while both Pacific Rim films were about the mass destruction of cities, you never got the feeling they were cynically trading on the emotional impact of September 11th imagery. The franchise was always careful to devote significant passages of screentime to showing us the residents of any given kaiju-threatened city fleeing to, and then safely ensconced in, impregnable underground bunkers.

This was a small thing, but it turned out to be hugely important, even essential, to our ability to enjoy the robot-on-monster whomping unspooling on onscreen.

There was, however, a palpable shift in tone between the original film and its sequel. Where Del Toro’s film positively reveled in its knowing, grubby, fully intentional cheesiness, DeKnight’s follow-up seemed to want to disavow the franchise’s shlocky roots, and allowed less light and humor into the proceedings. As a result, it was more efficient, but a lot less fun.

That mystifying trend continues with the latest iteration of the franchise, the Netflix animated series Pacific Rim: The Black. In just the first three episodes made available to press, the world of the franchise gets bigger, the lore deeper and the tone dramatically grittier.

That whole bit about making sure we know that the humans are safe? Yeah, that’s out the window — death comes early and often for many, many characters in the series. The fact that The Black‘s two main characters are a teenaged brother and sister searching for their parents does nothing to “kiddify” the story; in fact, it’s the impulsiveness of the sister, Hayley (voiced by Gideon Adlon) — a character trait often played for laughs in stories like this — that gives rise to a shattering turn of events, leaving her riddled with guilt. Her cautious, overprotective brother Taylor (voiced by Calum Worthy) carries feelings of inadequacy that cause him to make mistakes that cost lives.

Set in an Australia that has been largely evacuated and left to the kaiju, the series sends Hayley and Taylor off on a quest for their missing parents inside a long-abandoned (and weaponless) training Jaeger named Atlas Destroyer, voiced by Erica Lindbeck with an amusingly faux-affectless sardonicism.

It wastes little time loading them up with still more lore for us to keep track of: the eponymous and mysterious “Black,” sinister experiments, new kaiju, power cells, glowing eggs, and various militant factions eking out a rough and warring existence in the Outback — the result is something like what you’d imagine would happen if Mad Max ever met Godzilla, though given the series’ dour tone, you should subtract about 40 percent of the fun that meeting would doubtlessly entail. (Actually, you know what? One of the faction leaders is drawn to so thoroughly and distractingly resemble Brian Cox’s character on Succession, I’m gonna give 5 percent back. Call it 35 percent less fun, then.)

In ditching the original film’s sense of loose, Saturday creature-feature goofiness for something more elaborate, calculated and narratively dense, Pacific Rim: The Black is betting that fans of this franchise want its creators to take the prospect of big robots whomping on big lizards more seriously. Personally? Gimme cheesy (the big bowl of hot queso that is 2013’s Pacific Rim) over gritty (the Fig Newton filling of the Netflix series) any day.