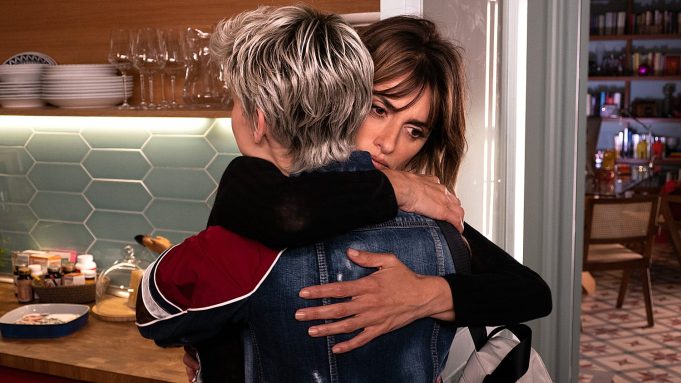 Among the multiple pop sources and forms that Pedro Almodóvar has always poured, like some slightly mad chef, into his movies, one that looms particularly large is the soap opera. I have often described his aesthetic, especially back in his bad-boy days, as Telemundo on peyote. Almodóvar’s “Parallel Mothers,” which opens the 78th Venice Film Festival tonight, tells the story of two women, both single mothers, who give birth to baby daughters at virtually the same moment (they’re roommates on a maternity ward in Madrid), and it’s a film of cascading twists and turns, of thickening complication, of high family drama. Hearing that, you might imagine that it’s a movie of high comedy as well — a giddy and ironic Almodóvarian stew of maternal diva melodrama. But “Parallel Mothers,” while it keeps us hooked on what’s happening with a showman’s finesse, is not a comedy. It’s not an over-the-top Pedro party. It’s an unabashedly serious movie, one so straightforwardly sculpted and emotionally down-to-earth that there’s no distance between the audience and what’s happening onscreen.

Almodóvar, who is 71, has left camp and irony behind before, but I confess that I wasn’t a fan of “Pain and Glory” (2019), in which Antonio Banderas played an Almodóvar surrogate who was up to his eyeballs in problems; the movie, in my opinion, was riddled with a kind of sodden self-pity. “Parallel Mothers” is as serious as any film Almodóvar has made, but in this case he hasn’t let go of his luminously light, beguiling, puckish side. The picture draws you in and holds you. It’s Almodóvar’s disarmingly moving tribute to the shifting, ever-bending bonds of motherhood, to the inexorable pull of family, and it may prove to be his most popular film since “All About My Mother” (1999), even though it couldn’t be more different in tone.

When we first meet Janis (Penelope Cruz), a professional photographer who’s approaching 40, and Ana (Milena Smit), who is still in her teens, we assume they must be opposites in some essential way. But that would be the formula for a schlock vision; these two overlap as much as they don’t. Both, it turns out, became pregnant accidentally. Janis was having an affair with Arturo (Israel Elejalde), a forensic anthropologist who’s facilitating the excavation of the unmarked grave of her great-grandfather, who was among the 100,000 citizens who went “missing” during the Spanish Civil War and the brutal reign of Francisco Franco that emerged from it. That crime — state-sanctioned murder that ripped families apart — is the film’s backdrop. Arturo, with his angelic beard and glasses, seems a gentle, caring soul, but he’s married, with a wife who’s battling cancer, so when Janis announces that she’s expecting and that she intends to have the child, he can’t be there for her. That’s okay; she’ll do it on her own. And despite the less than ideal circumstances, she’s happy with her decision.

Ana, by contrast, starts off in a state of fretful despair. It turns out that she became pregnant in a highly traumatized way (several young men coerced her into sleeping with them under the threat of leaking a sex tape), and as an adolescent from a severely broken home, she feels woefully unprepared for what she’s about to go through. But Janis tells her not to worry, that she’ll embrace it. And she turns out to be right.

In “Parallel Mothers,” Almodóvar is a master storyteller who looks at single motherhood through a lens of domestic suspense. There’s no false conflict, no hyping of the action. “Parallel Mothers” recognizes that Janis and Ana are each taking on an immense burden, and as their situations unfold, the film keeps us in touch with how the passion, the anxiety, and the logistics of motherhood are all intertwined. Cruz acts this part with a mood-shifting immediacy that leaves you breathless. First she’s an I-am-woman warrior who will meet every challenge. Then she’s a testy multitasker with a flaky au pair who never seems to do enough. Then she’s a loving but desperate parent who feels abandoned by fate. Then, after Arturo visits and comes away somehow feeling that he’s not the father of this swarthy baby girl (does she look so dark because of Janis’s Venezuelan grandfather?), Janis learns why that might be, and both she and the audience are in for a shock.

That’s the film’s first grand twist. It’s followed by another that’s even more shocking in its casual extremity. Yet even as we want to cry out in protest and say, “Come on, that wouldn’t happen,” we realize, in fact, that it could happen. That it does happen. “Parallel Mothers,” set in a world where men are a mere shadow, is a movie that engages life and death, capturing the rotating primal drama that being a mother really is.

Slowly, inexorably, Janis and Ana are drawn together: as comrade mothers, as collaborators on the making of potato omelets, and as more than that. Milena Smit endows Ana with a Gen-Z defiance that’s both obstinate and admirable. She starts off as a girl, but we see how motherhood recasts her soul, taking away her terror and replacing it with strength and focus. For a while, Ana is helped out by her own mother, Teresa, but she’s a narcissistic aspiring actress — played with no-fuss moody magnetism by Aitana Sánchez-Gijón — who has gotten the chance to be in a play that will take her to the provinces. And damned if she’s going to let a little thing like helping take care of her daughter’s infant get in the way. That said, families are all about need, and Janis and Ana start to prop each other up. Almodóvar, not usually a pop-music maven, makes transporting use of Janis Joplin’s version of “Summertime” (it turns out that Janis was named for her), using it to reference how the 1960s permanently scrambled our family values into something at once new, chaotic, and in certain ways better.

The political dimension of “Parallel Mothers” is quite powerful — a howl of rage, and an exposé (literally, as the unmarked grave of Janis’s family is laid open) of the Franco regime’s atrocities. But you may wonder, at first, how it’s connected to the rest of the movie. Two women joining forces to confront the joy and pain of motherhood; the historical murder of civilians. They’re connected because “Parallel Mothers” is really about how the drive that moves us to sustain our families, whatever the challenge, is nothing less than the life force, drawn from generations and held within us. At the end, when the film visibly unifies that force, it’s one of Almodóvar’s most transporting moments.