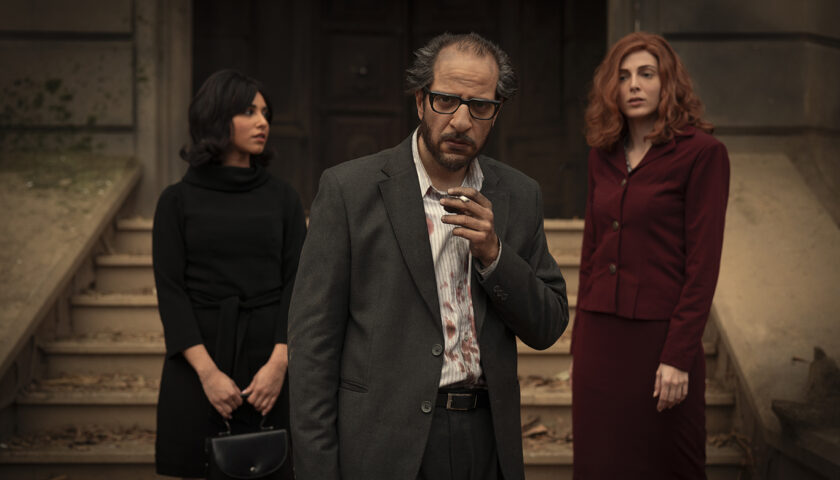 In an apartment building, a young boy plays hide and seek with his friends, asking “Ready or not?” He wanders into the basement, where he sees something scary behind an old refrigerator.

Refaat Ismail (Ahmed Amin) readily acknowledges that if he has any luck at all, it’s bad luck. It’s 1969 in Cairo, and the bald university professor walks through his life with his shoulders slumped. Coffee mysteriously spills all over whatever he’s working on. The light fixture in his dining room fell down. Whenever he eats anything with cardamom, which he hates, he always ends up with the inedible seed in his mouth. He also sees ghosts, especially one in particular.

He’s about to turn 40, and his sister Raeefa (Samma Ibrahim) wants him to come to dinner with his family, including his young cousin/arranged fiancée Huwaida Abdel Moniem (Aya Samaha). He hates birthdays, surprises, and birthday cakes, but he feels obligated to go. Before that, though, he gets a surprise even he feels is welcome: a visit from Maggie McKillop (Razane Jammal), with whom he had a relationship back when both were in grad school in the UK. He still loves Maggie, and as much as he thinks he shouldn’t bring her to his sister’s apartment for dinner, he invites her anyway.

Even though Maggie is charming, Refaat is less than comfortable. Then the topic of Shiraz (Reem Abd El Kader) comes up; she was a little girl who lived in a spooky mansion near where Raeefa, Refaat, and the rest of their friends (soon to become family) would play as kids. We flash back about 30 years, and through various scenes, we see that Refaat falls for Shiraz, to the point where the ghostly girl leads him to the now-dilapidated mansion, and makes him jump off a roof ledge. His older brother Reda (Ahmad Dash) catches him and breaks his leg, for which he still has a significant limp.

During an air raid, Refaat, Maggie and Reda (Rushdi Al Shami) go looking for Raeefa’s son Taha (Adam Wahdan), who has the same “gift” Refaat has. Rafaat finds him on the roof, in the same position he was in 30 years before, on the ledge about to jump. The word “death” is smeared on the wall in chicken blood. That night, Refaat tells Taha that to help him deal with the ghosts he sees in his head he has to “humor” those thoughts. But it seems that Refaat has trouble doing that himself.

This almost feels like Supernatural, if you set it 50 years in the past and replace the two handsome leads with a balding sad sack in a grey suit and ratty tie.

The big thing we didn’t expect from Paranormal, produced by Amr Salama and based on the novel series by Ahmed Khaled Tawfik, is that it had a dark sense of humor akin to the show we mentioned above, as well as other American shows of its ilk like The X-Files. Most of the humor comes from Amin’s ability to make Refaat a downtrodden sad sack who seems to find an odd sense of comfort and entertainment in his sad sackiness.

“Because I hate this day, I’ll wear my classy suit, the blue suit that makes me extremely attractive,” is one of the voice over lines we hear from Refaat. That’s the snarky voice of anyone who has little self-regard, and Refaat has that in spades. We also find out from Maggie that the reason they broke up is that he’d say the opposite of how he felt, and his “inner monologue” betrayed that, even in the show’s present day. That kind of dry, dark humor is something that’s rare to pull off, and it even comes through despite the fact that the show is mostly in Arabic.

The structure of the series looks like it’s going to give us a “ghost of the week” story, along with an underlying continuing story about Refaat’s “gift”, his family and his relationship with Maggie, who will likely investigate various mysteries with him. It feels like the right structure for this show, since weighing it down with just mythology would make it too heavy and bleak. From the start it looks like Amin and Jamaal have the chemistry to pull off the idea that this beautiful woman once (and maybe currently) was in love with Refaat, or at least the version of him she remembers from university. There’s also the complicating factor that he’s already engaged to his young cousin Huwaida, whom he has affection for, but just not in the way he feels when he sees Maggie.