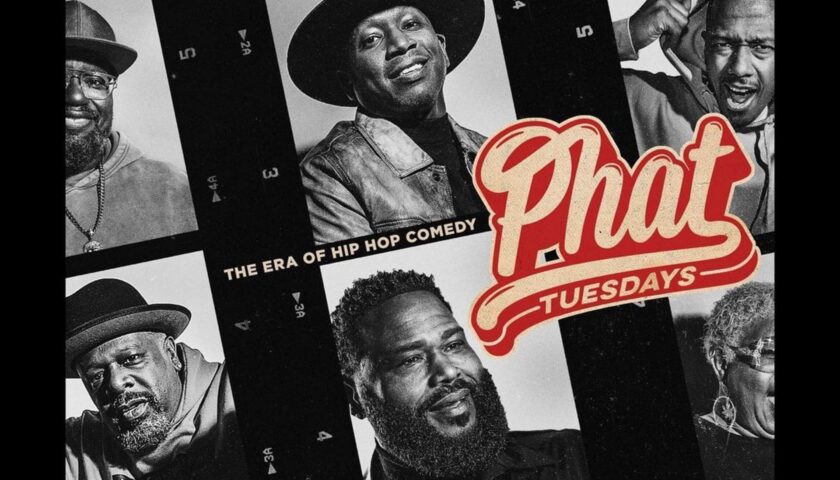 From 1995 to 2005, the legendary Comedy Store in Los Angeles devoted one night a week to showcasing Black comedians. Before that, Tuesdays were hardly hopping, and they never would’ve become “phat” without Guy Torry. In the early 1990s, Torry had worked his way up from the mailroom to the writers’ room at the Fox sitcom Martin, where he co-wrote the classic “Romantic Weekend” episode. For many Black Gen-Xers the line “That ain’t no damn puppy!” resonates as strongly as “We were on a break!” from the contemporaneous Friends. Torry would leverage his success into an opportunity for his fellow Black comics.

Hudlin films most of the interviews on the Comedy Store stage, so they feel like an intimate performance that’s fresh and never over-rehearsed. Stand-up is traditionally a solo affair, but Hudlin mixes things up: At times, he pairs Haddish with rapper Snoop Dogg, and they’re hilarious together as they recall their very different experiences during the height of Phat Tuesdays. This is all familiar terrain for anyone who was around during the ’90s and engaged in hip-hop culture, but Hudlin avoids telling a story we’ve heard before or producing a highlights reel of the decade. There are new revelations and interesting perspectives presented with the benefit of hindsight.

Chappelle observes how segregated or, more to the point, racist the comedy industry was during the late ’80s. George Wallace explains that the only way into the industry was to tailor your material to white audiences. There was an unspoken rule that there was room for just one major Black comic per decade: That was Redd Foxx in the 1960s, Richard Pryor in the 1970s, and Eddie Murphy in the 1980s. (The documentary, perhaps for obvious reasons, doesn’t mention Bill Cosby, who was arguably the true breakout Black comedian of the 1960s.)

Although the Comedy Store’s owner, Mitzi Shore, had what her son Pauly describes as a “special relationship” with Pryor, she was less nurturing or even appreciative of other Black comedians. Shore rejected both Harvey and Robin Harris, whose act she reportedly claimed was “too Black” for the Comedy Store’s audience. Marsha Warfield reveals how a fed-up Harris moved on to emcee the Comedy Act Theater, an all-Black comedy club in South Central L.A. This soon became the place to be for Black talent who didn’t have to compete against each other for Shore’s favor. Industry insiders were frequent guests. According to Torry’s older brother Joe, the Comedy Act Theater provided Black comedians a reliable room to work and perfect their craft.

But Torry had his own bold plan: If Hollywood would’t come to the “hood,” he’d bring the “hood” to Hollywood. The Comedy Store’s general manager, Scott Day, agreed to give Torry the 50-seat Belly Room for a one-month tryout. It seemed as if Torry was set up to fail, but he was undaunted: “This room is too important. I’m representing Black comedians who need this opportunity. And if I fuck this up, we’ll never get this opportunity again.”

Hudlin reinforces how motivated Guy Torry was to help other Black comedians. As his own fame grew, he didn’t pull up the ladder behind them. He personally defied the rule that there was only room for “one” major Black comedian at a time. Phat Tuesdays quickly became a sensation, expanding from the cramped Belly Room to the 400-seat main room. It was the hot spot for the next decade, drawing such celebrities as Murphy, Kobe Bryant, and Prince to the VIP tables. By the mid-’90s, network TV was getting progressively whiter (Seinfeld, Friends, Frasier, Will & Grace) as one-time hits like Martin, In Living Color, A Different World, and The Fresh Prince Of Bel-Air left the airwaves, but Black culture itself remained dominant, arguably because of Phat Tuesdays, which provided a launching pad for such ’90s heavyweights as Chris Tucker.

Despite Mitzi Shore’s concern that white audiences, with few exceptions, wouldn’t appreciate overtly Black comedy, Phat Tuesdays’ predominately Black audiences were receptive to anyone who was funny and brutal to anyone who wasn’t. Torry’s philosophy was “funny-ism not favoritism.” A now poignant example is the late Bob Saget, who often performed at Phat Tuesdays. This was not long after his turn as TV dad Danny Tanner on Full House, but the comics recall how Saget’s not-ready-for-TGIF act would leave the crowd stunned but roaring with laughter.

Hudlin fosters a relaxing vibe where everyone’s free to speak their minds, unfiltered, just as they did at Phat Tuesdays. The comedians interviewed, regardless of their level of fame, come across as down-to-earth and grateful for the opportunity Torry provided each of them. They discuss their craft seriously but with more humility than navel gazing. Perhaps because of their backgrounds and the battles they fought in a white-centered industry, no one considers themselves or their work above politics. After all, just reaching an audience as their authentic selves was itself a political act. This includes the Black women comics who were just as determined to make a name for themselves.

Hudlin’s rapport with the comedians allows him to probe tough subjects, such as the sibling rivalry between Joe and Guy Torry, which has at times bordered on Cain-and-Abel intensity. He also builds a compelling narrative around the Comedy Store’s celebrated wall, which bears the names of legendary comedians who graced the stage. Pharoah, perhaps only half-kidding, says that once you’re on the wall, you’ll live forever.

Not everyone who killed at Phat Tuesdays made it to the wall, and that oversight’s hard to justify when it’s revealed that Phat Tuesday single-handedly kept the Comedy Store financially afloat for most of its run. You wonder why they didn’t move the show to Saturdays, and it’s a question that Hudlin leaves unanswered, perhaps because that’s not the point. Hudlin and Torry have gathered these comedic talents to celebrate a tremendous legacy; their docuseries gives the Phat Tuesdays regulars their due.