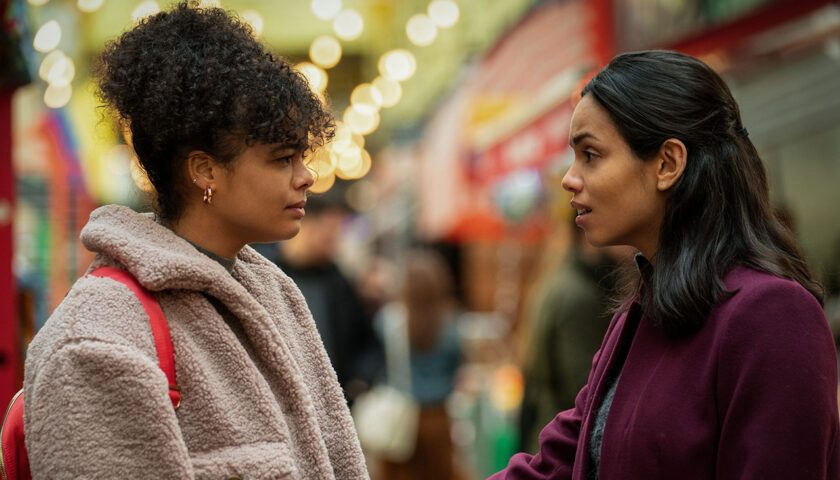 Leo Newman (Gerran Howell) walks into his hotel, and in the hall on the way to his room, he’s grabbed by four people wearing dark clothes and masks of Queen Elizabeth, Prince Charles, Prince William and Kate Middleton. They stuff him in a suitcase and leave. What do they do about the security cameras? Nothing; in fact, the security video of the kidnapping gets uploaded to a video leak site and quickly goes viral.

We then see the lives of a few people in various parts of England. Aadesh Chopra (Kunal Nayyar) reluctantly works for his dad’s carpet business, fixing his ’00s-era computer and getting ribbing from his brothers. But he has a big business deal going, big enough that he flew to New York the previous week, draining what little money he and his wife Shiv (Mandip Gill) have left.

Natalie Thompson (Georgina Campbell) has come in from New York to get married, a reception that her mother (Clare Perkins) is paying for. She keeps wondering where her mother got the money, but her sister Monique (Lydia West) tries to tell her to not worry about it. But when she looks at the texts on her mother’s phone she sees that she owes someone money. She goes to the flat she shares with her fiancé, where she has a wad of money and a burner phone hidden away. But she makes it back to her mother’s house in time to get ready.

Tara McAllister (Elizabeth Henstridge) has also been to New York in the past few days; she’s a professor at Oxford, and she’s dealing with a problem student who would rather watch the viral kidnapping video (that her daughter also watches) than actually do any work. On a flight from New York To London, Sean Tillson (Elyes Gabel) effectively threatens an obnoxious passenger in business class who’s hassling the flight attendant. But when it’s time to deplane, he goes into the lavatory, takes his beard off, puts on a wig and a hat, and hides himself behind a fellow passenger’s young son.

Back in New York, Leo’s mother Katherine (Uma Thurman), a high-powered businesswoman who works in “strategic communications”, speaks to the lead FBI agent on the case, Scott Anderson (Noah Emmerich). She explains that in her job, she makes a lot of friends, “most of whom hate you. Then there are the enemies.”

While Aadesh, Natalie and Tara go about their days, we see them being tracked. The three of them are eventually arrested by the National Crime Agency: Aadesh at his parents’ house, Natalie at her wedding and Tara as her class is starting.

The first episode of Suspicion does a poor job of setting up its central story, mainly because it spends way too much time on showing who the four accused Brits are. The idea is that, at least in the case of the three that are arrested at the end of the first episode, the three “ordinary” Brits are being falsely accused. They’re just normal people in their normal lives. The only thing that ties them together is that the were in the same New York hotel at the time of the kidnapping.

But we all know that there’s more to it than that, which is why we were wondering why showrunner Rob Williams and his staff were spending so much time pussyfooting around. Beyond the basics, which is introducing us to most of the players in this story — we haven’t met Eddie Walker (Tom Rhys Harries) yet — and showing that they’re coming under suspicion, we really don’t learn all that much in the first episode.

We know that not all of the suspects are actually being wrongly accused, but the characters are currently so bland that we’re not all that invested in finding out who is innocent and who isn’t.

The case itself is weird, especially the piece about the viral video. Why are all these people laughing at a video of a guy being stuffed in a suitcase, and making versions with other celebrity heads pasted onto his? Is this supposed to be some sort of commentary on how we’ll watch any viral video, even if it’s a depiction of a violent crime?

Besides Nayyar, whose story is actually the most intriguing, Thurman and Emmerich are there to lend some star power to the series, but they seem to both be underutilized. Emmerich can play other characters than FBI agents, and it seems like casting him as Anderson shows a lack of creativity on the producers’ part. And Thurman just has to look super-serious and stern for whatever few scenes she’s in, and not expend much more effort than that.