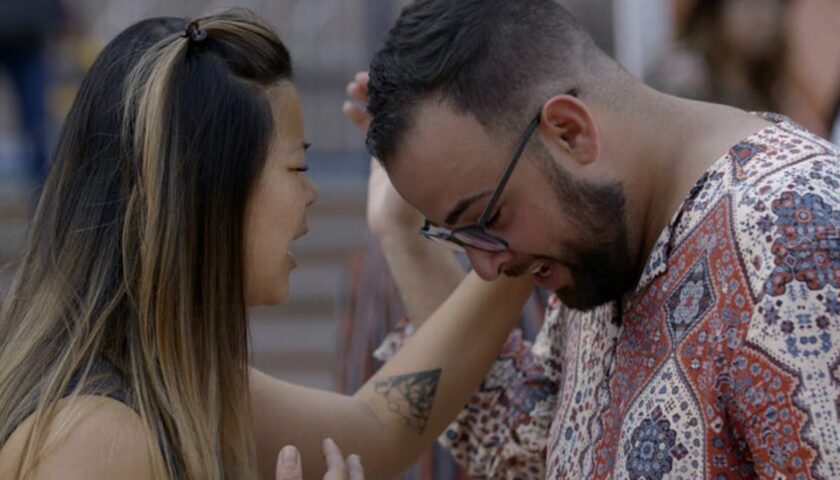 Reparative or ‘conversion’ therapy is the attempt to change a person’s sexual orientation or gender by a religious leader, licensed counselor, or in peer support groups. All major medical and mental health associations have denounced the practice as harmful.” – Title card in “Pray Away” on Netflix

The opening sequence in the must-see Netflix documentary “Pray Away” follows a young man named Jeffrey McCall on a rainy day as he paces back and forth in front of a grocery store, asking patrons as they exit, “Do y’all need any prayer?”

McCall, we learn, is a modern-day leader in the “conversion therapy” movement, which holds that one can literally “pray away” one’s sexual orientation and become an “ex-gay” through faith and willpower and the support of others with similar experiences. One doesn’t doubt McCall’s sincerity as he tells his story time and again and is often taken up on his offer to say some prayers — but there’s an undeniable sadness about him, and it’s hard to shake the feeling he’s constantly convincing himself of his cause even as he’s trying to persuade others.

Director Kristine Stolakis occasionally returns to McCall’s story in “Pray Away,” but the main storylines center on four former leaders of the ex-gay movement from a generation ago. Stolakis skillfully interweaves present-day interviews with archival footage of these prominent figures in the movement — all of whom have renounced their roles and are now living as out gays or bisexuals.

Arguably the most prominent figure is one John Paulk, who along with his wife Anne in the 1990s was a fixture on the talk show circuit and was featured in Time, Newsweek, People, GQ, et al. John was a former homosexual and Anne was a former lesbian—but they became a happily married, straight couple with children, trotting out their lives as the faces of increasingly powerful organizations such as Focus on the Family and Exodus International. Years after Paulk was photographed leaving a gay bar in Washington, D.C., in 2000, he finally denounced his belief in gay conversion therapy and came out as gay. We see him in present day, living a happy and contented life with his partner — but also voicing strong regret for the harm he caused and the lies he told about himself for years.

We see similar pain and remorse expressed by Randy Thomas, a former vice-president for Exodus, and Yvette Cantu Schneider, a former spokeswoman for the Family Research Council who is seen on old TV news clips with chyrons identifying her as a “FORMER LESBIAN” as she makes forceful and condescending arguments in favor of the movement. Director Stolakis also reminds us of the political tenor in the 1990s and through the 2000s, with President George W. Bush’s administration aligning with various ex-gay, anti-gay, putatively religious groups to fight against the movement for marriage equality, and the passage of Prop 8 banning same-sex marriage in California in 2008. The film notes that “a national survey found that LGBTQ youth who experienced conversion therapy were more than twice as likely to attempt suicide,” and a teary-eyed Thomas confesses he believes he has blood on his hands.

For all its sobering and poignant moments, “Pray Away” also has its stories of triumph, as when we follow Julie Rodgers, a former teenage poster child for the ex-gay movement, who endured unspeakable pain (she engaged in ritual self-burning) as she struggled with her public persona and the truth in her heart and soul. It’s a heartbreaking tale, but one with a happy ending, as we see Julie and her partner getting married in a church, and they’re just about the most beautiful and loving couple you’ve ever seen, and you want to join the attendees in applauding.