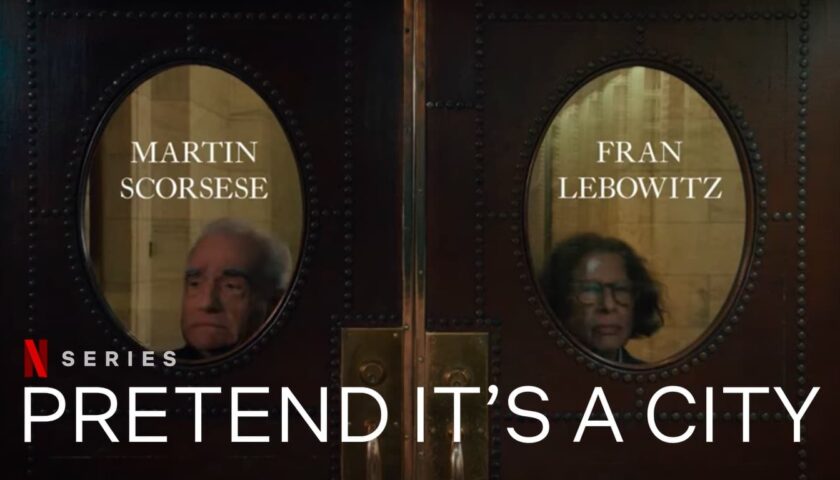 Opening Shot: A bit band plays from vintage footage. Then we see author and humorist Fran Lebowitz answering a question about people in New York who stop in the middle of the street reading their maps. She said she’d write a manifesto with the advisory title “Pretend It’s A City.”

The Gist: In the first season’s seven episodes, loosely grouped around different topics surrounding life in New York, we see Lebowitz in conversation with Scorsese in different venues: at a public Q&A session, alone in a restaurant, and in scenes where he directs her to walk around the Panorama of the City of New York at the Queens Museum. Shot pre-pandemic, it’s a view of New York we haven’t seen in awhile, full of crowds and bustle. And that’s the New York that Lebowitz talks about, going back to the early ’70s days when she was young, Soho was a seedy artist’s enclave, Times Square was full of peep shows and the city was bankrupt.

For instance, she thinks the job of mayor should be split into “day mayor” and “night mayor,” because “a lot of stuff happens at night.” She even volunteers, figuring she can start around 4 PM. Speaking of Times Square, every non-tourist’s bane of existence, Fran gives tips for how to get through there if you have to go there for a show or something. She thinks about how she can get to where she’s going with the least contact with Times Square. “What if I went all the way up to 125th Street then came all the way down? It would be pretty long but it would be worth it.” Don’t even get her started about the “lawn chairs” Mike Bloomberg put there before left office.

She talks about how the venue where she used to see the New York Dolls just simply fell down one day, showing how crumbling the city was in the ’70s. The city is constantly changing, which is something she enjoys, but she has the same habits she has from the ’70s, like keeping track of her stuff while on the subway. “It could be a pencil, but I’d have a death grip on it; you’re not getting this pencil from me!”

Our Take: New York-specific humor, which seems like it’ll only be appreciated by people who live or work in the five boroughs, can translate to a wider audience if it’s delivered in a way where the general public can relate themes to their own lives. Lebowitz’s loving complaints about the city work because, in a lot of ways, her complaints are as much about the futility of daily life as much as it is about how that futility butts up against the fast pace of New York.

Pretend It’s A City works because Scorsese and Lebowitz aren’t trying to do anything more than capture Lebowitz’s sharp wit as she makes her seemingly off the cuff observations on everything from outrageous rents to other people looking at their phones to just about anything that pops into her head. Sure, some of the lines, like her “pretend it’s a city” bit, have been repeated numerous times at various events, but she delivers them as if she’s making these quips for the very first time.

Because the scenes of Lebowitz walking around the busy city were filmed pre-pandemic, a series that was initially intended to be Lebowitz’s hilarious symphony of grouchiness about life in New York becomes an inadvertent love letter to The Way Things Used To Be. Scorsese’s loving direction helps that along. Sure it could look at times like two senior citizens complaining that their chicken soup is too salty. But just when you think Lebowitz’s grousing gets to be too much, she pulls out a witticism that makes it all OK, and induces the director into fits of laughter.

Parting Shot: As the credits roll, we see shots of Lebowitz walking around Grand Central Terminal late at night. She walks down some stairs, comes back and flips a light switch. Then all of a sudden all the lights go out in the main hall.