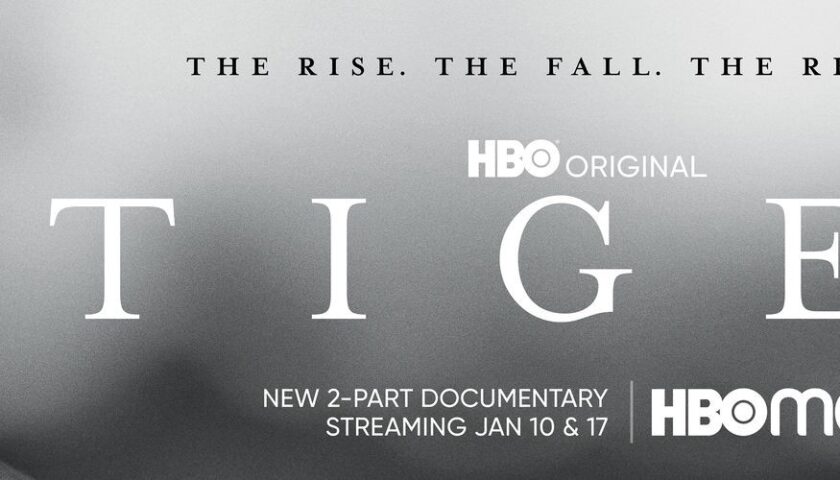 Tiger Woods’s story was easy to read as the most inspiring in American sports until the very moment it became among the most depressing. On one side of the pivot point of November 2009 sits a life lived in public as an athlete bound for glory from his earliest days, treated as a Messianic figure by his overweening father and, shortly thereafter, as a culture-shifting superstar by the media. On the other, after Woods’s double life was suddenly and publicly ripped open, sits scandalous ignominy that, as Woods’s preternatural athletic gifts slipped away with age, could no longer merely be clawed through with athletic achievement.

These two halves to Woods’s life so far form the two parts of HBO’s excellent new documentary “Tiger,” a project that brings together an unusual serious-mindedness with as rare a gift of pacing. This series makes elegant and understated arguments about celebrity, race, and a seemingly unknowable public figure who’s long sat at their intersection. “Tiger,” whose first half aired on Jan. 10 and is available on HBO Max, and whose second half airs next weekend, provides a compelling case for its subject as intriguing even after the reams of coverage he’s generated.

Executive produced by Alex Gibney and drawing upon the authoritative biography by Jeff Benedict and Armen Keteyian (who are also among the executive producers), “Tiger” takes a linear path through the Woods story, beginning with childhood talk-show appearance and success as an amateur before young Woods dropped out of Stanford. Rich with interviews — notably with Woods’s first girlfriend, Dina Parr, and his former caddy, Steve Williams — and with archival footage, “Tiger” packs its two installments (both under two hours) with the sort of densely packed detail that allows any potential viewer to stumble into an epiphany.

Consider, for instance, Woods’s disinclination to refer to himself as Black in public, despite the media (and the potent Nike campaign that helped build Woods’s legend) positioning his successes as wins for the Black community — and despite notes of caution from commentators during Woods’s rise that, should he fall from grace, he would not be afforded the mercy society grants a white man. Or the sad story of the aptly named Parr, the sort of life-affirming connection Woods had been trained from youth to treat as a distraction, or the oddly apt fact that Woods became obsessed with scuba diving, a way to bring a world-class athlete’s gift for obsessive control to bear on the pursuit of utter solitude.

These are allowed to breathe without relentless massaging in part because the documentary doesn’t press its case too hard. The goals of “Tiger” are very different from those of “The Last Dance,” but the latter, very enjoyable documentary about Michael Jordan is an instructive comparison in at least one way: In the absence of supreme control, retelling a story through every granular detail is a good way to sap some of its vitality. (It’s also instructive in terms of how different a documentary looks when a subject has control: Jordan, the hero of “The Last Dance,” is here the satyr-like figure who introduces Woods to the pleasures of Las Vegas.)

“Tiger” operates with a sort of allusive spareness, trusting its audience to draw connections more than do many projects of its nature in our explain-everything age. That “Tiger’s” directors Matthew Heineman and Matthew Hamachek take a slightly self-congratulatory step back to announce the arrival of key Woods mistress Rachel Uchitel — ending the first episode with the very start of her interview — is understandable given that it’s her first on-camera sit-down. It also precedes an interview whose content is played less for shock value than for humanity, revealing a depth of concern for a naive and sheltered Woods.

Uchitel’s appearance cements a sophisticated argument, dredged up from the tabloid morass of Woods’s last decade-plus of public life like a Titleist from a water hazard. The “good” half of Tiger Woods’s life, beginning with the young athlete trotting the links before he could speak, wasn’t so good. And, perhaps, freed from the impossible burdens of changing the world, the bad half isn’t so bad. Towards “Tiger’s” conclusion, its subject speaks less haltingly, and with a perspective that, if he possessed earlier in his career, he withheld in favor of an enigmatic stillness. A clear-eyed appraisal of fame and its aftermath, “Tiger” is urgent and powerful viewing that withholds judgment, but nothing else.