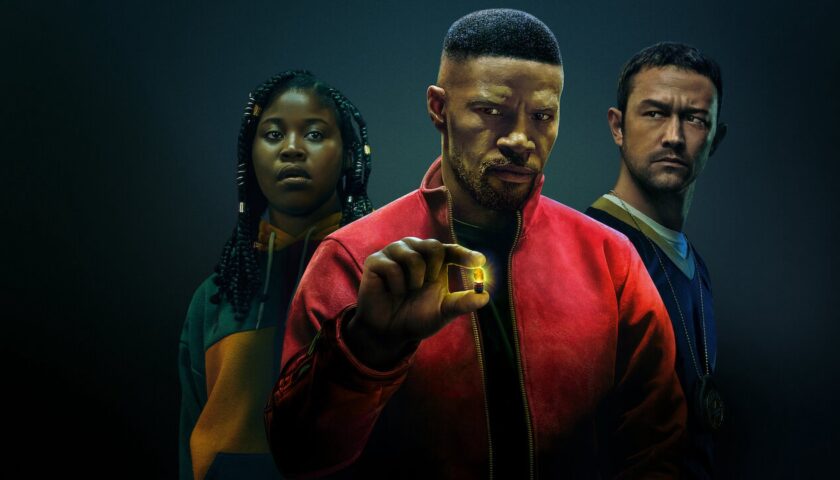 In New Orleans, a distribution group create a bunch of pills that can give each person superhero abilities and deadlier reactions. Meanwhile, a teenage dealer named Robin, a local cop named Art, and an ex soldier named Frank must team up to save the cop’s daughter and take down the people who created the pills.

Upon hearing of the title of the movie and the fact that Jamie Foxx and Joseph Gordon Levitt were starring in it, I watched the whole thing this morning and what I got was actually pretty decent. It’s not a perfect movie, sure, but it has some good elements in it.

Now there are some problems I do have with the film. The story does deliver on the action, but the execution leaves something to be desired mostly due to the whole idea of pills giving you superhero abilities not being fleshed out enough. Plus the villains are very one-dimensional. Not the actors themselves, but the way they were written and they were underdeveloped. Also, the side characters haven’t been given much to do.

That being said, everything else is really good. The action sequences are really superbly intense and gripping, the pacing’s very good, the music score from Joseph Trapanese (who did the music scores for the Divergent sequels) fits the atmosphere and does it job, and the cinematography along with the special effects look really nice, but the best part would have to go to the acting. Everyone involved did a good job the best coming from Jamie Foxx and Joseph Gordon Levitt. Dominique Fishback is also likeable and her chemistry with Jamie and Joseph is spot on especially during the action sequences. Not to mention that there are some witty one liners and some funny moments along with some drama that doesn’t feel sappy and shoe-horned in.

Overall, it’s not a perfect movie and it’s certainly won’t win any newcomers, but this is a decent superhero flick that’s got some good action, solid performances, and nice cinematography. This is only worth watching to those who love action movies.