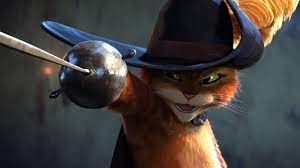 Antonio Banderas (The Mask of Zorro) will once again voice the sword-wielding bandit Puss in Boots and Salma Hayek (Frida) will reprise her role as Puss’ love interest Kitty Softpaws, whose paws are also skilled with a sword.

The furry duo will be confronting new enemies on their journey, plyed by a stellar cast including Florence Pugh (Midsommar) as Goldilocks, Olivia Colman (The Favourite) as Mama Bear, Ray Winstone (Edge of Darkness) as Papa Bear and Samson Kayo (Bloods) as Baby Bear.

“Puss in Boots discovers that his passion for adventure has taken its toll: he has burned through eight of his nine lives. Puss sets out on an epic journey to find the mythical Last Wish and restore his nine lives.”

Puss In Boots: The Last Wish is an animated comedy movie starring everyone’s favorite Spanish-speaking cat, Puss in Boots. The smooth-talking feline will be resuming his expert swordsmanship in this upcoming sequel and the second installment of the Puss In Boots franchise.

Antonio Banderas will be reprising his iconic role of Puss in Boots, as well as Salma Hayek as Puss’ fiery and street smart girlfriend Kitty Softpaws. The award-winning actors will also be joined by a star-studded ensemble voicing new characters who the pair encounter on their adventures.