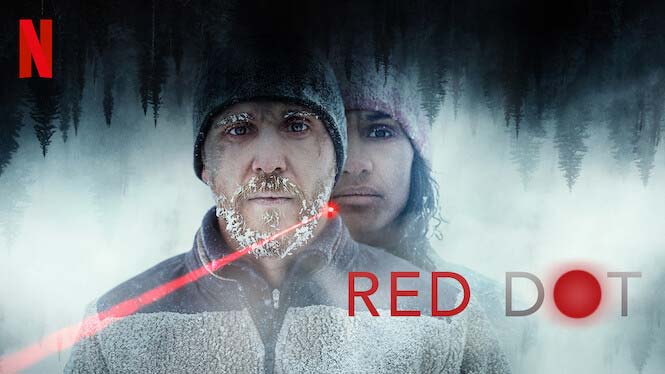 RED DOT is a new Netflix thriller from Sweden. We’re dealing with a survival story where a couple is being hunted during a snow storm. The title refers to them suddenly realizing that someone is aiming at them. Then the shooting starts. Read our full Red Dot movie review here!

RED DOT is a new Netflix thriller from Sweden that offers a survival story featuring two threats. First, the fact that someone is aiming a gun at them, creating a red dot to illustrate this, in the middle of the night. Then the shooting begins which leads to the second threat; The blistering cold of a snowstorm while being out in the mountains with no shelter.

With a runtime of just 85 minutes, this one is worth watching. And don’t worry about the dialogue being in Swedish because not that much is said. After all, they’re busy trying to survive!

Continue reading our Red Dot movie review below and find the movie on Netflix from February 11, 2021.

We’ve seen this set-up in many classic horror movies and thrillers; A couple living in the city decides to get away from it all for a nice weekend in the wilderness. Instead of enjoying nature and each other, they end up fighting for their lives. It’s a classic plot and that’s for the simple reason that it works.

Once this scene has been set, you can head in all kinds of directions; Inbreed humans living in the hills, a serial killer on the prowl, an animal hunting for food (or sport), or the age-old revenge theme. Whatever the reason, it’s usually a very entertaining story to tell and Red Dot is no exception.

I will say that the plot is a bit too heavy-handed for my liking. It’s almost as if it’s made way too obvious what we’re meant to believe is happening, which means I immediately don’t believe anything I’m being lead to believe. This doesn’t ruin the movie-watching experience but it also doesn’t help it.

Moral of this movie; Don’t judge a book by its cover and never try to run from your mistakes!

The small cast of this Swedish Netflix movie

The two absolute lead protagonists of Red Dot are Nadja and David since they’re the couple being hunted for most of the movie. Nadja is portrayed by Nanna Blondell while David is played by Anastasios Soulis. Despite the Greek sounding name, he was born in Sweden to a Greek father and a Finnish mother.

Both Nanna Blondell and Anastasios Soulis have a lot of experience from both movies and TV series. They do also come across as very seasoned actors who know what they’re doing. You might see Nanna Blondell again later this year since she’s also in the upcoming Marvel movie Black Widow (2021).

Other actors in Red Dot include Johannes Kuhnke who was in Lars von Trier’s The House That Jack Built (2018) and the Golden Globe-nominated movie Force Majeure (2014). Also, Johannes Kuhnke was in many episodes of the Danish Netflix series The Rain so he might be a familiar face to many.

Red Dot is directed by Alain Darborg who also co-wrote the screenplay with Per Dickson. In turn, Per Dickson also worked as the first assistant director on this movie, so it’s quite a joint effort. In the past, Alain Darborg has directed and written several short films and TV series.

For me, Red Dot suffers a bit in the storyline department for reasons I can’t mention here without doing spoilers. I’ll simply say that people act in strange ways and blame others for their own mistakes. This is not unusual but it feels a little too far-fetched for me.

Having said that, I still feel Red Dot is a very entertaining movie that looks good and has some good performances by its cast. In other words, it’s worth checking out on Netflix and perfect to watch during a snowstorm. Just to remind you that things can always get worse, so be happy that you’re safe and warm with Netflix delivering entertainment to get through the lockdown.