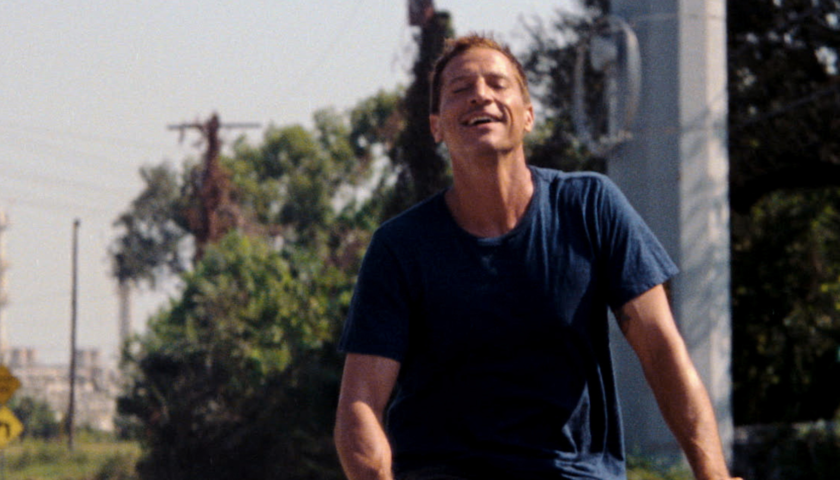 Set in the lead up to the 2016 election, which becomes the backdrop of Baker’s Red Rocket, Simon Rex plays former porn star Mikey Saber, who sweet talks and manipulates his way back into the lives of his ex-wife Lexi (Bree Elrod) and mother-in-law (Brenda Deiss) after his career loses steam following a decade working in Los Angeles. Back in Texas City, he picks up a job selling drugs that he buys from a local family. For a while, the story seems to be leaning towards a redemption arc for this clearly despicable character. However, Mikey’s desperation and plans to get back to his old life emerge when he meets Kaylee, whose nickname is Strawberry (Suzanna Son), a 17-year-old donut shop employee whom Mikey is convinced is the key to getting back into pornography and rejuvenating his career.

Red Rocket is certainly not for everyone. The film, which opens with NSYNC’s “Bye Bye Bye,” is yet another of Baker’s that explores poorer communities. There are moments when its commentary is blistering and bleak, but the story wastes time meandering to a finale that feels sensational and contrived than one ripe with meaning after a long buildup. The narrative swings from one side of the pendulum to the other in extremes. By the end, nothing is really learned about Mikey beyond his porn star past and his charming manipulations. He talks a big game, which sometimes opens wider the door into what his opinions are on a variety of things.

But after a while, following his story becomes tedious; the pacing is too slow and it amounts to nothing much of the time, repetitive in its exploration of its central character and haphazard in developing his journey. Simon Rex’s performance carries the film. Mikey is wildly unaware of his narcissism; he’s incapable of caring about anyone genuinely, and uses people to get what he wants, employing his charisma and porn career as a selling point quite often. Rex’s portrayal of Mikey balances all of these characteristics with a childlike hopefulness and naivete, unabashed in his actions and uncaring of the harm it brings others.

The actor has a seemingly unending well of energy that he puts into every scene, infusing it with a lot of lively chaos that permeates the film’s entire run time. To be sure, the film feels authentic in Baker’s hiring of first-time actors in other roles, allowing their interactions to feel a bit more genuine in its setting. However, the film often feels like a too-long, jumbled story that takes shortcuts to get to its ending. Baker seems to want to shock his audience more than anything, which undercuts the parts of Red Rocket that do work.

The film is overt in highlighting how many people Mikey screws over to get what he wants. Being a jerk and a compulsive liar is the point, making broad (and often uncomfortable) parallels between Mikey and Donald Trump, whose infamous convention speeches blare in the background throughout the film. What Red Rocket ultimately lacks is depth, consequences, and growth for Mikey. He just keeps doing what he’s doing without change and, while that might be the intent, it doesn’t amount to much. Red Rocket has some strong moments, with Rex’s performance uplifting the narrative, bursting with energy and magnetism at every turn. But the film’s sense of humor can’t keep it afloat when it doesn’t truly have any character growth and plods slowly through to the ending.