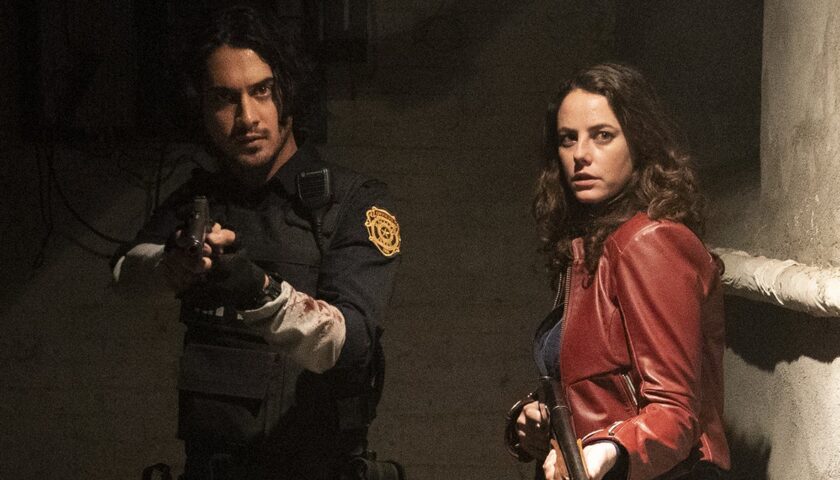 Popular genre franchises never truly die; they’re always primed to rise from the grave in mutated modernized forms. Thus, following six feature films headlined by Milla Jovovich (and often spearheaded by director Paul W.S. Anderson), Capcom’s zombie video games get new big-screen life with “Resident Evil: Welcome to Raccoon City,” a reboot that does away with its signature leading lady and aims for a more faithful adaptation of its interactive source material. That tack proves to be a complete misfire, as writer-director Johannes Roberts supplies plenty of fan service but scarce coherent plotting and even fewer scares. Throw in chintzy CGI effects, and the theatrical prognosis for this undead saga appears dire.

Combining characters and premises from the Capcom series’ first two titles, “Resident Evil: Welcome to Raccoon City” opens with a flashback to the youthful experiences of siblings Claire and Chris Redfield at an orphanage run by the Umbrella Corporation, a nefarious Big Pharma conglomerate that dominates midwestern hamlet Raccoon City. This prologue is revisited occasionally throughout the remainder of Roberts’ tale, and its purpose is to introduce evil scientist William Birkin (Neal McDonough), establish a future deux ex machina, and hint at a traumatic Claire ordeal that’s never properly resolved. That sort of sloppiness is emblematic of the film, which later makes a habit of placing adult Chris (Robbie Amell) in overwhelming zombie peril, only to magically extricate him from danger via cheap edits.

Set during one bio-hazardous 1998 night, “Resident Evil: Welcome to Raccoon City” charts the intertwining fortunes of Chris and his sister Claire (Kaya Scodelario), who returns to Raccoon City because a chatroom buddy has claimed that Umbrella is up to no good. That’s true, and it’s not long before she’s both reunited with estranged Chris (who stuck around their hometown), and then separated from him once he and his tactical police-force buddies — tough Jill Valentine (Hannah John-Kamen), cocky Albert Wesker (Tom Hopper) and featureless Richard Aiken (Chad Rook) — head out to Spencer Mansion to look for their missing Bravo team comrades. As they investigate that spooky abode, Claire partners with rookie cop Leon S. Kennedy (Avan Jogia) and Chief Brian Irons (Donal Logue), the latter of whom is embodied by Logue as a perpetually yelling cliché of a cliché. Together, this group doesn’t have half the charisma of Jovovich, although in their defense, Roberts’ script barely bothers giving them an ounce of distinctive personality.

Gamers will quickly recognize that Roberts’ dual-track narrative is a combination of “Resident Evil” (Chris’ mission) and “Resident Evil 2” (Claire’s thread). There are plenty of other touches strewn throughout to please die-hards, including the appearance of a monstrous licker and Titan, underground laboratories and secret passages that are accessed by solving puzzles, and slow-moving zombies who suddenly lurch at would-be victims. Superficial authenticity, however, can’t compensate for the absence of nerve-jangling tension — something Capcom’s user-controlled originals delivered in spades. Roberts’ jump-scares are of a half-hearted variety, and worse, he and cinematographer Maxime Alexandre only conjure up a single unnerving sight: that of a young child and mother who share the same creepily vacant stares and rapidly thinning hair. Even the undead themselves are a bland bunch, marked by pasty, veiny countenances, gaping mouths and lots of generic roaring.

Roberts is so busy flip-flopping between his two storylines that he never settles down long enough to build suspense; notably, a promising sequence involving a faulty lighter pays no dividends, given how quickly it devolves into the usual chaotic combat. After numerous explosions and one team member’s betrayal, Chris and Claire join forces to fight their way to safety. Nonetheless, the survival-horror stakes in “Resident Evil: Welcome to Raccoon City” remain woefully low, since everything is sketched in one-dimension, be it the origins and purpose of the zombie menace (the T-Virus receives a mere offhand mention), Chris’ surrogate-father bond with Birkin, Jill’s fondness for Albert, or Raccoon City itself, which feels more like a borderline-abstract set than a genuine community. Such wholesale sketchiness is also true to the games, which simply goes to show that fidelity isn’t an end in itself.

A pair of early zooms, as well as recurring white-on-black intertitle time cards, flirt with ’70s aesthetics — an impression furthered by Claire’s decision to hitchhike to Raccoon City in a big rig. Subpar computer-generated effects, helter-skelter editing and a blaring score, though, mark it as a contemporary B-movie. Not that the reboot’s shortcomings are tied to a particular era. In any decade, the film’s bevy of unexplained details, dropped subplots, paper-thin characterizations and fright-free mayhem would disappoint.