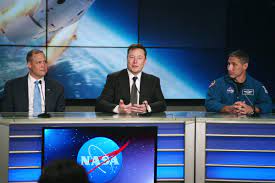 A dull and airless Netflix documentary by an Oscar-winning duo whose brilliant films about the highs and lows of human exploration (“Meru,” “Free Solo,” and “The Rescue”) have rattled with the heart-in-your-throat intensity of riding a rickety wooden roller-coaster, Jimmy Chin and E. Chai Vasarhelyi’s “Return to Space” renders Elon Musk’s mission to Mars with all the rigor and excitement of a two-hour infomercial for SpaceX. While I can’t speak to how this project came about or what purpose it hoped to serve, “Return to Earth” so pungently reeks of sponsored content that it doesn’t matter who actually footed the bill for it.

Which isn’t to suggest that Chin and Vasarhelyi wouldn’t be compelled to Musk on their own accord, or to the astronauts who risked their lives in order to lead SpaceX’s first crewed launch into orbit. The filmmakers’ previous work has been galvanized by a high-intensity approach to Herzogian characters — by a rich affinity for cave divers, free climbers, and anyone else who refuses to settle for the simple comforts of terra firma — and a neurodivergent kajillionaire who dreams of dying on Mars seems like such a natural subject for Chin and Vasarhelyi that Herzog, no stranger to the idea of disguising sponsored content as a more organic form of documentary), is probably kicking himself for not getting to Musk first. Or not.

Regardless, “Return to Space” doesn’t really get to him either. On the contrary, this film regards the richest man in history from such a remove that the distance could only be measured in lightyears. Chin and Vasarhelyi don’t cut around the fact that Musk is basically just a bold suit with bottomless pockets (his abject uselessness in the SpaceX control room is maybe the most humanizing thing about him), but their camera tends to fawn on him with the reverence of a fan contest winner, or the mortal awe of watching Prometheus steal fire from the gods.

Not that a little awe isn’t called for, here. Much like Musk’s company, “Return to Space” is animated by the idea that we have to bring the stars back down to Earth before we bring people to the stars — that the imminent possibility of space travel needs to be re-incepted into the collective unconscious before NASA can rekindle the same enthusiasm that fueled it to the Moon in 1969. Musk has always had a gift for inflaming the world’s imagination, and this documentary is an extension of that.

“Return to Space” strives to distill the magnitude of what SpaceX has accomplished so far and share the wonder of what it hopes to achieve in the future, but the film’s scattershot focus — in stark contrast to the breathless immediacy of “The Rescue” — and advertorial tone diminish the sheer thrill of watching the company land an orbital class rocket for the first time. Despite taking pains to establish the dangers of launching into orbit (the Challenger and Columbia explosions are revisited in morbid detail) and introducing us to the families of the two men who crewed the Dragon to the International Space Station and back in 2020, the movie’s grand finale is constructed with all the edge-of-your-seat excitement of a press release.

Chin and Vasarhelyi still find ways to excel in such moments of life-or-death urgency, their cameras honing in on the unmistakably nervous faces of the SpaceX engineers at mission control in a way that reminds you just how much is at stake with every launch. But their documentary flatlines whenever it pauses to explain the end of NASA’s Space Shuttle program, or to position the CEO of Tesla as the hero who redeemed it through the power of a historic public-private partnership (cue the parade of sycophantic talking heads, all of whom are on Musk’s payroll).

And that’s exactly what “Return to Space” does for most of its running time, as archival footage of NASA’s lowest moments is intercut with dotcom-era clips of Musk launching rockets at Burning Man (all of which is layered under newly recorded audio of Musk saying things like “Earth is the cradle of humanity, but you cannot stay in the cradle forever”). His all-or-nothing bet on the success of SpaceX is recounted with mythical admiration, while Neil Armstrong — briefly seen railing against the public-private sponsorship at a congressional hearing — is dismissed as a dinosaur whose footprint on the past didn’t provide him with any special authority on the future.

Maybe it didn’t. Maybe Elon Musk, who once thought it’d be funny to sell flamethrowers over Twitter for $500, really was the only person with the wealth and vision required to reinvigorate America’s space program and push humanity that much closer to becoming a multi-planet species. Even (or especially) at its most blandly propagandistic, “Return to Space” makes clear that someone has to do the work; technology doesn’t invent itself, and every paradigm-shifting eureka moment requires an unfathomable degree of perseverance in order to grow into something more.

But this aimless documentary — made all the more exasperating by the elemental appeal of its subject matter — doesn’t do enough of its own work in return. It doesn’t question the cost of Musk’s endeavors, it doesn’t reflect on the consequences of his obsession (beyond some dry corporate speak about how SpaceX’s failures are instrumental to its success), and it doesn’t ask itself or anyone else if the richest people are necessarily the right ones to lead us to another world. Instead, it crescendos with someone in the SpaceX control room using the word “jabroni” at a crucial moment of the Dragon landing, as if reclaiming the cosmos for the common man. As if the rest of the movie contained any convincing evidence that Elon Musk is racing to Mars for anyone but himself.