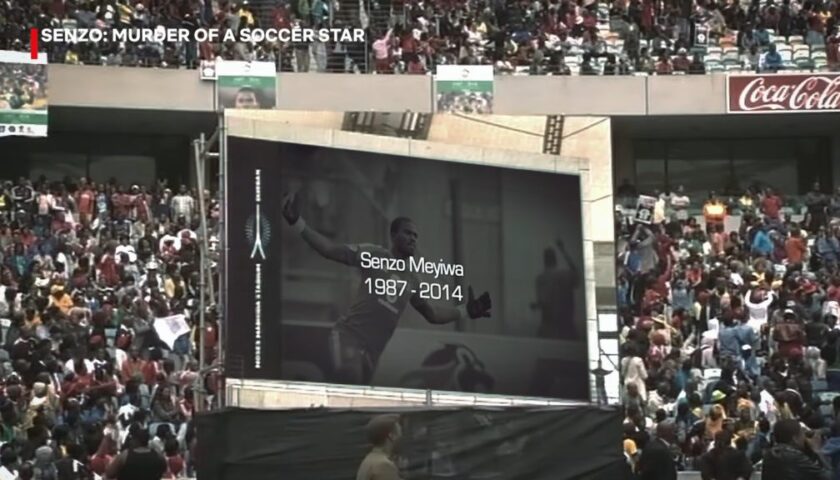 Senzo Meyiwa was South Africa’s biggest soccer star and the center of one of the country’s modern mysteries. Tragically, in 2014, he was murdered in his girlfriend’s home. He was one of a half dozen people outside the house before two stormed in and shot him to death. Yet, no one seems to know who killed him or the motive. What we do know is this story has it all. Fame, affairs, fortune, poverty, love, murder, polygamy, religious zealots, music moguls, hitmen, a “Twitterazzi,” and of course, everyone has their hand in the till and has their own story to tell. So, who killed Senzo? That is what the docuseries Senzo: Murder of a Soccer Star tries to investigate.

This is not just a tragedy of losing a man to a young or beloved soccer star. It represents something good coming out of townships born out of apartheid segregation. A place like Umlazi has been called “dumping grounds” for a community of people not to make it in life simply because they have been born with an inherent issue of pigmentation that is different from the ones in power and control.

Which leads to the question of who could want this man killed? And could there be political ramifications? Could this be just a matter of a love triangle? Then it could be the wife, Mandisa, or the girlfriend, Kelly? His parents were livid with Senzo’s choice to try and marry a second wife. Was this a case of religious intervention that turned bad? A simple robbery? Then why did the assailant leave a BMW in the driveway and only take one cell phone and nothing else? Perhaps racism had a hand in the murder of even soccer officials? The more they look at the case, another door leads to another clue, which leads to another trap door with no end in sight.

Why couldn’t it be Mandisa? If he marries a second wife, it threatens her financial security. One fact seems to be that Senzo took a bullet for Kelly. In one scene, his mother talks about “contacting” people to help save her family, but did it go too far? Finally, the son of a music producer was there. A man behind a famous Twitter handle claimed he was the killer.

Could he pay off the people in the house to save his son? Kelly’s music career was floundering. Senzo’s best friend was out of work. And the others there had personal relationships with a connection to that producer. The docuseries does a remarkable job of giving equal treatment to all the suspects to keep the viewer engaged, which leads to peak binge viewing. Of course, this is all speculation, and by the time you reach the final episode, everything is thrown out the window.

Director and producer Sara Blecher does exceptionally well by locating and producing archival footage for the boilerplate responses and prewritten statements and how the camera captures individuals’ reactions immediately after they say them. The camera lingers, and you watch the severe and sad faces slowly turn to smiles after five seconds of silence. It is revealing, even creepy, and creates an almost Gone Girl effect.

Senzo: Murder of a Soccer Star shines a light on the death of a man who represented so much to so many. The fact that his case has not been solved is puzzling and points to a sociological problem that many oppressed groups face as the tragedies they suffer are never as important as their white counterparts. Blecher’s docuseries is an intoxicating mystery that points to a much, sadly, broader problem that needs to be addressed.