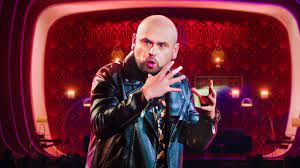 Ricardo Quevedo Tomorrow Will Be Worse (Manana sera peor) is Netflix’s latest stand-up comedy special after Los amargados somos mas and Hay gente asi. The Colombian special is directed by Julio Cesar Gaviria. It has a runtime of about one hour and is available with English subtitles. It was recorded at the iconic Teatro Faenza in Bogota, where he remembers his 20 years in comedy and discusses his marriage and the epidemic.

Ricardo Quevedo discusses facing many challenges in life but still going forward. He recommends taking a break and watching this show if you want to give up once in a while. After a tumultuous years of stress and anxiety, he appears to be attempting to enliven his audience. But wait till he says that what we do isnt worth a damn because tomorrow will be worse. Well, he isnt telling a lie and smells like a clickbaity line to grab attention and make people listen to you.

The stand-up hasn’t begun yet, and from the black-and-white video, we return to the colourful stage, where the Colombian comic enters and seems surprised to see so many people cheering and clapping for him. He starts his piece by observing the automobile owners and bike riders stuck in traffic. Anything about driving irritated people in traffic and the kinds of drivers on the road always makes up for some good laughs. Be it the route finding motorcycle riders, who can always maneuver through the line of cars in a zig-zag manner, or the slow riders who are too afraid to go beyond the economical limit.

This translates to the Colombian person’s anxiousness or, as he puts it, ass clenched to the end. How people feel about every single thing as a trivial matter and that even unites them together, like in the case of robber alert text chain messages sent by someones aunt who lives miles away. Because as humans, we cannot escape the dark cloud that surrounded us for a long time, his set material includes many pandemic-related bits as well as other stand-up specials that sounded unnecessary and pointed out obvious things on the internet as memes.

His insight is both unique and funny as it should be. The stupid things we did during the epidemic to keep the virus away, were just ridiculous, and the way he presents them is equally funny. Followed by his experiences living with his family and the answer to the long-asked question of what to eat, between couples. What sets him apart is that usually the comedians focus on one person’s point of view. But he delves into what both of the partners must be thinking about when asked, what should we eat today? And he has a solution for the unanswered question too. Not sure if it will be successful but, couples you can try and tell others.