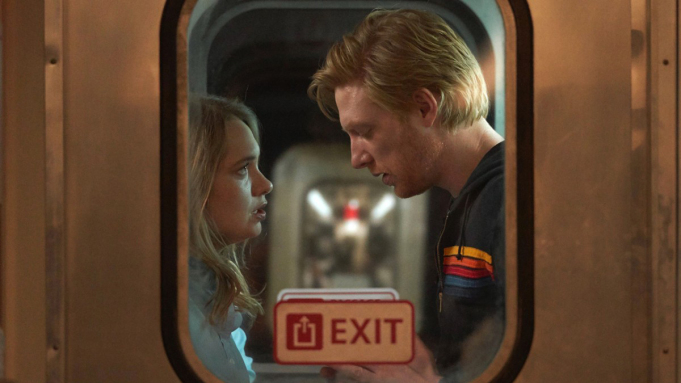 A split-screen of a man carefully tying his running shoes and a woman jumping into a pair of purple Chucks. They’re both running, but for different reasons.

Oh Me-joo (Shin Se-kyung) is the one sprinting in Chucks; she’s going to a film festival where a film that she translated into English is premiering. In the meantime, national track and field star, Ki Seon-gyeom (Im Si-wan) is attending the festival with his mother, renowned actress Yook Ji-woo (Cha Hwa-yeon), who distracts Me-joo from seeing her credit on screen.

For his part, Seon-gyeom is ambivalent about his career, and his teammates are a mixed bag. The fastest runner, Kwon Young-il (Park Sung-joon) is a bully, and Kim Woo-sik (Lee Jeong-ha) is getting himself beaten up on a regular basis. For Me-joo, she has to deal with the smarmy director of the film she worked on, Han Seok-won (Bae Yoo-ram); she needs him for an interpreting gig that will help her career.

But when she stands up to her former college professor while he spews drunken misogyny, Seok-won runs after her when she exits. Me-joo literally runs into Seon-gyeom, who grabs the fake gun that she dropped and holds it to Seok-won’s face; he takes her gun with him by mistake. They meet again a few days later when she gets robbed trying to buy another fake gun, and he launches an art case owned by a student named Lee Young-hwa (Kang Tae-oh) that hits the guy on the head. This time, after giving their statements to the police, they exchange numbers.

Me-joo swallows her pride and asks the professor for forgiveness, so she can save that interpreting job. Through contacts, though, she’s offered another job, interpreting for an elite athlete as he goes on an international press tour. She’ll be working for sports agency president Seo Dan-a (Sooyoung), who is so cold that she rejects the desire of her visiting brother to spend time together. When she finds out who the athlete is, she’s starting to feel it’s fate.

When we watch K-drama rom-coms, we tend to look at a couple of things: The version of meet-cute that we’re given in the first episode, and the chemistry between the show’s stars. Run On checks both boxes, making for a solid start, albeit in a convoluted way.

Suffice to say, this is mostly about Seon-gyeom and Me-joo’s romance. There will be time for Dan-a and Young-hwa to connect, but we’re only gathering that from some of the episode descriptions and coming attractions. There are a lot of supporting players, and most of them do well with their roles. But there is plenty of chemistry between the leads, Shin Se-kyung and Im Se-wan, to carry this show for however many episodes it’ll run.

We’re especially impressed with Shin Se-kyung as Me-joo. She’s got some good comic timing, and she can hold a look as well as any actor in the K-dramas we’ve seen to this point. Her character has more of the comedic heavy lifting to do, as it seems that Seon-gyeom is a very serious and thoughtful character. But perhaps as they get closer, she’ll make him less serious.

What we weren’t impressed with are the machinations that got these two together to begin with. Like we said, it was a bit convoluted; Me-joo has to stand up to the professor, grabbing his toupee in the process, then beg for his forgiveness, then get hired for this job. And for the meet-cutes, she’s got to buy a fake gun from a guy on the other end of the headset on the MMPG she plays. Is this unusual for K-dramas? Not really. But the maneuvering to get these two crazy kids together seemed to be more twisty than usual. But once the show settles down, that maneuvering won’t matter much.