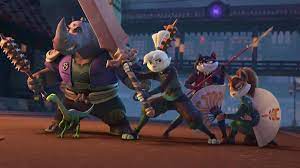 Created by Stan Sakai, the animated series follows the footsteps of a teenage rabbit samurai, a descendant of a great warrior, as he attempts to become a true samurai with the help of trusted friends and aides. The true samurai’s path is that of hardship as he has to protect his city from Yokai monsters, ninjas and evil aliens. The voice artists in the series are Darren Barnet, Aleks Le, Mallory Low, Keone Young, Shelby Rabara, SungWon Cho, Eric Bauza, and Sumalee Montano.

Netflix has unveiled a new trailer for Samurai Rabbit: The Usagi Chronicles, the animated series based on Stan Sakai’s historical action fantasy comic Usagi Yojimbo. The show will premiere on April 28.

Set in the futuristic city of Neo Edo, Samurai Rabbit: The Usagi Chronicles follows the story of Yuichi Usagi, a teenage swordsman and distant descendant to the legendary warrior Miyamoto Usagi. With the help of a misfit team of warriors including a hard-headed bounty hunter named Gen, an acrobatic pickpocket named Kitsune, and an aloof ninja named Chizu, Yuichi will have to contend with foul and fearsome creatures summoned from another dimension if he hopes to save Neo Edo and become a true samurai warrior.

The trailer looks like a futuristic chanbara version of Star Fox Adventures, with multiple anthropomorphic animals in Japanese attire running, swinging, and leaping through a futuristic sci-fi metropolis while being chased by Buzzsaw-wielding construction robots, villainous yokai, and other nefarious adversaries as they fight their way to victory.

For those unfamiliar with the series, Usagi Yojimbo is a highly successful comic book series drawing influence from the movies of Akira Kurosawa as well as the exploits of the legendary swordsman Miyamoto Musashi. It is perhaps best known in the West for its close connection to the Teenage Mutant Ninja Turtles series. The character of Miyamoto Usagi appeared multiple times in the 1987 animated series, the second season of the 2003 animated series, and the fifth season of the 2012 CG-animated series.