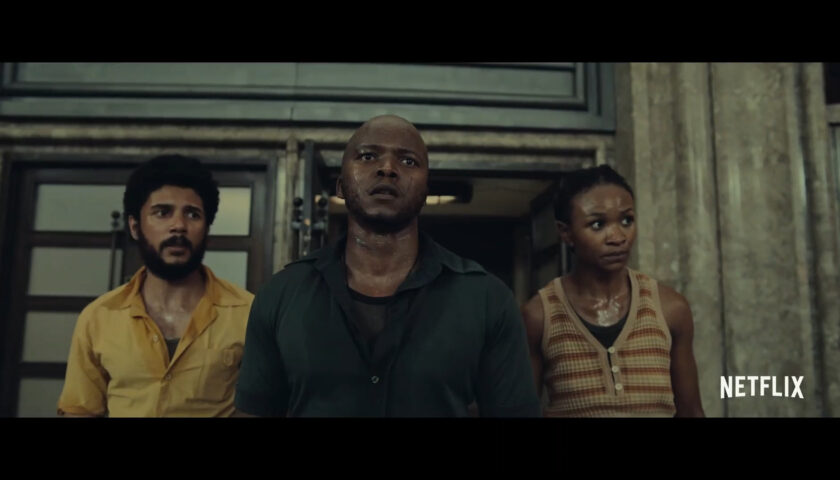 Set in 1980s Apartheid South Africa, three members of uMkhonto we Sizwe (MK) Calvin Khumalo (Thabo Rametsi), Mbali Terra Mabunda (Noxolo Dlamini), Aldo Erasmus (Stefan Erasmus) carry out non-lethal operations of sabotage against the White Supremacist Afrikaaner government. When the teams latest operation is stopped due to an informant within their team, the trio are forced to flee and take refuge in a bank with hostages. Captain Langerman (Arnold Vosloo) of the police tries to negotiate with the trio whilst also keeping the overzealous army from exacerbating the situation. With no hope for escape, the trio stage a standoff in the bank with the demand for the immediate and unconditional release of imprisoned MK leader Nelson Mandela.

Silverton Siege is based on the real life bank siege in the Silverton suburb of Pretoria, South Africa orchestrated by the Silverton Trio of Wilfred Madela, Humprhey Makhubu, Stephen Mafoko as well as George Molebatsi are credited with starting the Free Nelson Mandela campaign. The movie is the softmore feature of Mandla Dube who previously directed Kalushi: The Story of Solomon Mahlangu and the debut feature writing credit for Sabelo Mgidi. The movie works as both an engaging standoff movie as well as a character piece of how far one will go to attain freedom when it is cruelly denied.

While this may only be Mandla Dube’s second feature film, you wouldn’t know from watching it because with it’s tight pacing and gritty aesthetic that harkens to crime films of the 1970s, it’s a movie that is filled with style and tension to spare. The movie is sort of an “anti-heist” film in that it takes many of the tropes and trappings we’ve seen in these kind of standoff stories in American or European productions and reframes that setup in a uniquely South African story. Arnold Vosloo who most people know as Imhotep from Universal’s Mummy movies gives a solid performance as Captain Langerman who’s trying to resolve the situation peacefully and has no agenda other than making sure everyone (even the MK trio) end the situation peacefully and without casualties. The three MK members are also really good with Thabo Rametsi a strong lead who wants to make a difference whilst also avoiding casualties as he and his team make it a point only to destroy property and infrastructure and never people. Noxolo Dlamini and Stefan Erasmus are equally good as Rametsi’s team, with Dlamini in particular giving some solid intensity to her role that keeps you on edge.

The movie does have some hiccups to it however, the movie has one of those cold opens that’s a mere 20 minutes into the movie and it really didn’t need to have it. I also feel like the movie takes for granted its viewers’ knowledge of South Africa’s history with the MK’s full name never actually mentioned in movie, we do get the general idea of the era but it’s the sort of thing that could’ve benefitted from a prologue with some archival footage. The movie also has a character Supervisor Christine played by Elani Dekker, and while her performance is fine, there’s something about the way the character is positioned that makes her come off as something of a “savior” in the context of this story, but it’s not egregiously so or anything and it is in service of looking at the spectrum of everyone in the context of South African Apartheid with those on the black side who either submit, rebel, or in one character’s case “pass”, and on the white side you have those who are egregiously supremacist, those who are doing it because of maintaining a status quo, or those who are sympathetic but impotent. Like any movie there are flaws, but for me personally the flaws were far outweighed by the emotional resonance of the characters on display and I was glued to my seat for the entire running time.

Silverton Siege is a well-directed feature by Mandla Dube that incorporates the well worn tropes of bank heist/standoff films to build an exciting and thematically rich story that doesn’t let up till the very end. With engaging performances from Thabo Rametsi, Noxolo Dlamini, and Arnold Vosloo, movie is as well acted as it is directed and you grow to care about this situation and its ultimate outcome. The movie is maybe a little too confident in assuming viewers’ knowledge of Apartheid and some of the characters do feel a little heavy handed in certain respects, but despite these minor points Silverton Siege is an engaging historical thriller and I look forward to seeing more from Mandla Dube, Thabo Rametsi, and Noxolo Dlamini.