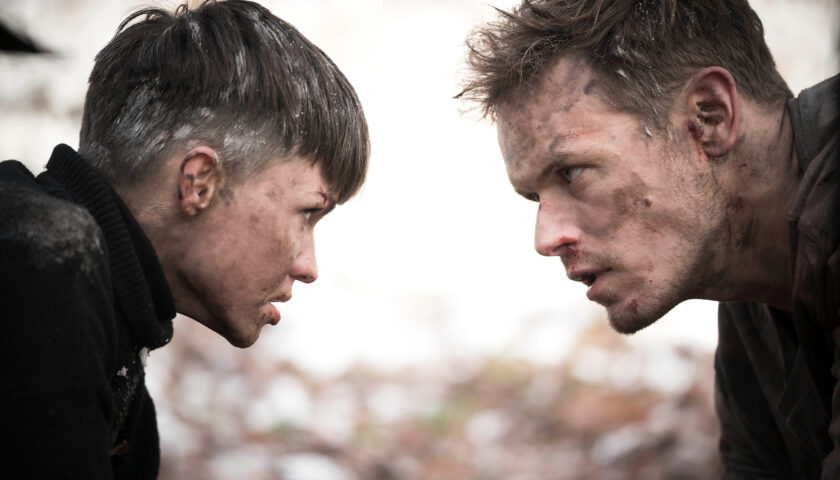 While airport bookstores are inevitably quiet, one of their most familiar names transfers to the small screen this week. Andy McNab. A name synonymous with a particular style of novel – action packed, testosterone pumped, based on his experiences as an SAS officer and with a little sprinkling of politics thrown in to beef up the plot. Which is exactly what you get with SAS: Red Notice – complete with a pinch of popular psychology.

SAS officer Tom Buckingham (Sam Heughan) has decided it’s time to propose to girlfriend Sophie (Hannah John-Kamen) and he’s going to whisk her off to Paris to pop the question. A last minute change of plan means going by Eurostar (or, for the purposes of the film, Eurostream) but also on board is a group of ruthless terrorists, headed by psychopathic Grace (Ruby Rose), aiming to hold the passengers hostage and demand a ransom from the British government. The alternative? Blow up the train and the gas pipeline that also happens to be inside the tunnel.

And you’ve guessed the rest. Standing in their way is Tom, in the age-old one-man-against-the-odds tradition of Under Siege and far too many more. Except he isn’t just fighting the terrorists. What becomes increasingly obvious – and is pretty clear from the start – is that the upper echelons of the SAS are a corrupt lot, in the pockets and pay of Grace and her crew. The government and the gas company aren’t exactly pure as the driven snow either, having employed the gang to clear land to build the pipeline in the first place. But, for Tom, his objectives are clear: kick the terrorists into touch and save his girlfriend who, it turns out, isn’t quite the soft touch she seems.

Sounds routine? That’s because it is and certainly not worth a running time of just under two hours. For anybody who loves their movies packed with muscles, military hardware, punch-ups and gun fights, this is a no-brainer. Trouble is, you could say the same about the film as a whole, especially at its efforts to introduce some psychological insight into the mix. We’re told at the start that less than one percent of the population are psychopaths and, while Grace is clearly one of them, whether Tom is another is open to question. He has some of the trademark signs, especially what has become the most familiar – pupils that don’t dilate when they see something frightening. If anything, his get bigger.

But you can’t have a psychopathic hero, can you? Of course not so, despite that solitary attempt at something more thought-provoking, the bruising fights and one huge and reasonably impressive explosion, this is nothing more than action pulp. Heughan, recently seen as Paul Newman in To Olivia, looks the part despite a mounting number of injuries, but the likes of Tom Wilkinson and Anne Reid are completely wasted in their roles. And, while Andy Serkis relishes going right over the top as a gum chomping, potty mouthed soldier, he’s simply doing it by numbers. Undoubtedly, there’s an audience for this kind of film – there’s plenty of them – but all SAS: Red Notice offers is the routine, the predictable and the stereotypical. Not so much a red notice as a red light.