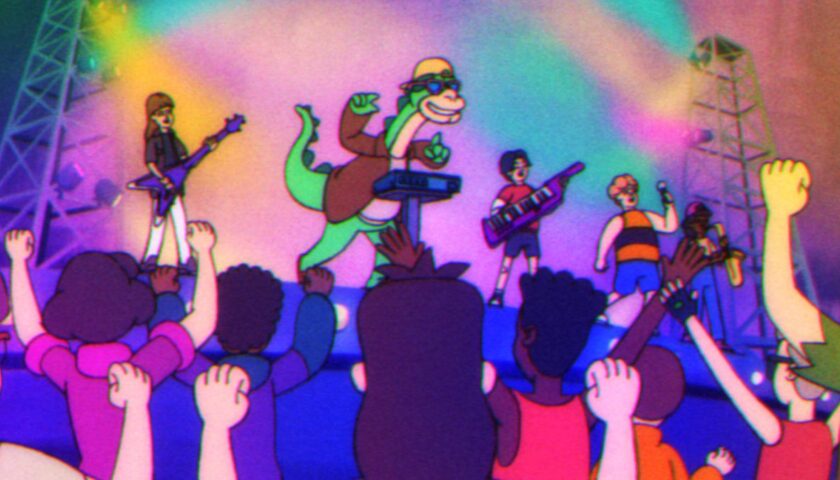 It’s hard to find a better word (or rather compound word) to describe this then Kyle Mooneyesque. The SNL comedian has cultivated a very specific brand of nostalgia-based parody from the late 80s and early 90s and it’s extra meaningful if you grew up on TGIF or Fox’s Saturday morning block.

Each of the eight episodes follows a series of cartoons. There’s one following the heroics of two professional athletes who live in the shadows of their more famous brother (Robin Lopez or Jarron Collins must finally be seen!) and are unusually violent that has shades of the 90s X-Men cartoons. Another has a dinosaur (based on Denver the Last Dinosaur) who gets suicidally depressed in the first episode.

The show is framed by two twin brothers cosplaying as Saved by the Bell extras who talk like the Teenage Mutant Ninja Turtles and even make up their own words like “zwaaz” (likely, a play on the turtles adding “cowabunga” in the vernacular). There are also public service announcements that highlight, well– the ineffectiveness of 90s public service announcements (think DARE) if nothing else, previews of live action films (extremely softball plugs) and promotional tie-ins that are hilariously obvious but not too different from today’s corporate synergy.

Then the show begins to get more serialized in a way that Kyle Mooney’s SNL sketches never have the capacity to be. This is why this show exists.

One of the less overtly funny shows (based off Thundercats and He-Man) starts to get a better gimmick when one of the twins, Skip, gets a one-line cameo. Similar to how Jaleel White famously wreaked havoc on the rest of the cast’s air time on “Modern Family” through accidentally hitting upon the show’s catch phrase “Did I Do That?”, Skip instantly gets catapulted as the face of the show and spearheads a live action film. Meanwhile, his brother gets left in the dust. On top of that there’s a casually played out murder behind the scenes.

It would be all very dark and complex if it wasn’t filtered through the “cowabunga” air-guitar-shredding cheeriness of 90s TV.

As opposed to broad and aggressive (Mike Meyers), random (Lonely Island), or exploring the “what if”s and meandering on tangents (Seth MacFarland), Kyle Mooney’s style of parody is an intricately-constructed recreation with glaring holes. It’s the juxtaposition that’s the joke and while many reviews say he might not be for everyone, there’s a lot to appreciate.