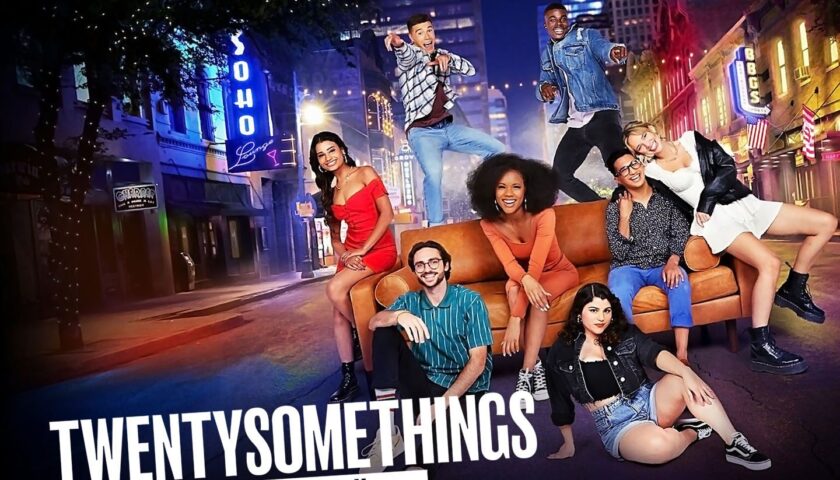 One of the cast members summed up Netflix’s latest reality show Twentysomethings: Austin well: “It feels like college again.” And he’s right, if you take away the classes, textbooks, and papers. The new series is fresh and exciting as eight people in their twenties—four girls and four boys—move to Austin,Texas.

Many of them are trying to find themselves in the bustling, growing city. The girls and boys live as next-door neighbors in modern, carbon-copy houses; they also share a backyard with a swimming pool where they frequently gather to hang out. While many cast members came to Texas wanting to explore the dynamic city, they find themselves kindling new bonds with other cast members admisst rising romantic feelings.

For a show about literally nothing but being roommates and being in your twenties, Twentysomethings: Austin has more to offer than I initially thought. t times, it feels like the cast members are just on one crazy long vacation where they go swimming, out to bars, and venture into the city On the other hand, everyone on the show really tries to make a living for themselves in Austin, which is what makes the show so interesting— yes, it’s about partying in your twenties, but it also covers how stressful entering the adult lifeTwentysomethings: Austin has cast members in an in-between stage of their lives—no longer in school and entering the job search, these twentysomethings ; instead, a try to find themselves, all while living off their savings.

Twentysomethings: Austin is different from other reality shows, many of which have competitions. This show doesn’t have any, which also means there’s nothing holding them in Austin other than self-fulfillment. Cast members aren’t forced to stay in Austin for a set period. It’s unsaid how long these cast members will be allowed to live in the provided house before they get kicked out. However, it’s interesting that the cast has the freedom to do whatever they want;they’re essentially just living their lives like any other person (except they’re featured on a TV screen).

The show selected some engaging people to join the cast. They’re all just ordinary people, but they’re not boring to watch. Sure, there’s always some conflict in their lives, such as jealousy over flirtatious behavior or the stress of job hunting.

What’s great about Twentysomethings: Austin is that this show isn’t superficial in the slightest. Reality shows tend to feel shallow and painfully scripted, but with this show, it genuinely feels like the cast are being their real selves. We see the cast bond, become friends, and quickly become each other’s confidants. Even when a cast member is at their lowest, they can confide in their new friends—it’s astounding to see how tight their bonds formed in only a few weeks.

The romantic feelings sparking between cast members is also entertaining. Twentysomethings: Austin isn’t intentionally a dating show, but putting an equal amount of girls and boys in close proximity promoted the romantic atmosphere.

Overall, Twentysomethings: Austin has a diverse cast—the show features people of different races, body types, and sexuality. One the guys decided to move to Austin because he wants to learn how to be gay, as coming out is something relatively new to him. He has yet to have a boyfriend, but he wants to meet new guys. On the other hand, one of the girls is openly bisexual—she flirts with both of the girls and boys in the house. Including diversity in reality shows like this is important for representation, and the show does a good job in this regard.

Other shows tend to have the same type of all-white, all-straight cast (The Bachelor cast comes to mind, which may now be racially diverse, but they certainly select people with the same body type (slim). Also, The Bachelor franchise may have become inclusive in regards to same-sex couples with Bachelor in Paradise, but before then, the franchise had a long history of severely lacking in that particular department). Inclusivity is growing in TV shows, and Twentysomethings: Austin fortunately hasn’t taken a step back.

Netflix only released the first six episodes of Twentysomethings: Austin, but the last episode includes an intriguing sneak peek for the next six episodes scheduled to be released on Dec. 17. It will be interesting to see where all of the jealousy and romantic feelings take the cast members next.