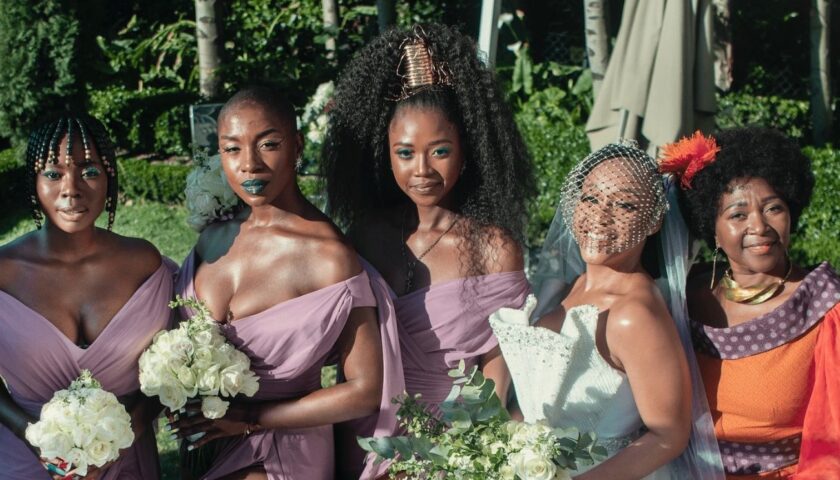 After ruining the wedding of her sister Beauty (Thando Thabethe) the previous Christmas, things have settled down for Tumi. We see her 12 hours earlier hanging out at a water park (remember, Christmas is in the summer in South Africa) with her boyfriend Khaya Manqele (Yonda Thomas) and his teen daughter Lulu (Tsumi Nkosi). She’s not 100% in love with his plans to buy a house for the three of them, and Lulu isn’t happy that it’s in Pretoria.

They’re going to a braai hosted by Valencia and Vusi Twala (Charmaine Mtinta, Lehlohonolo Saint Seseli), the wealthy parents of Beauty’s husband Sbu (Sandile Mahlangu); after escaping to London after their disastrous wedding, they’re back for the holidays. Val is putting on a lavish show, but Vusi, feeling a financial pinch, wants the drinks watered down and the good booze hidden. He also has to deal with his mother Gogo (Nandi Nyembe), who has terminal cancer but would rather die out in the world than be stuck in her son’s house with a nurse.

After Tumi and Beauty’s mother Dineo (Clementine Mosimane) and her sister Grace (Rami Chuene) show up, things get interesting when Edmund (Seputla Sebogodi), Dineo’s ex-husband and the girls’ father shows up unexpectedly, at Beauty’s invitation. While Tumi tries to drink that chaos away, Gogo orders her to drive her somewhere outside the house so she can have fun at least once before she dies.

When we watched How To Ruin Christmas, movies like the ones we cited above were exactly what came to mind, mainly because the show basically follows a lot of the same formula, just in series form. The first season left off on a cliffhanger of sorts, but it’s good to see the ensemble back for another season.

That chemistry is readily apparent as the families, who come from very different circumstances, get together for the braai. The Twalas are more showy — despite Vusi’s financial problems — and the Sellos are more down-to-earth. Though things like the Sellos bringing their own food like it was a potluck, and the two of them yelling at Uncle Shadrack (Desmond Dube) to keep his sheep out of the bathroom shows that their family has their own quirks. The fact that their family drama permeates another Twala holiday event just made us smile; they bring the circus with them wherever they go, it seems.

But the fun part of the first episode is when Tumi takes Gogo for one last day of fun, first to the same amusement park that she was at earlier, then to a casino. It bonded the two of them, and seeing Gogo want to go on the scariest rides was funny. Yes, the ending was poignant — this season is subtitled The Funeral, after all — but who wouldn’t want to go out the way Gogo did?

What we’re wondering is how Tumi is going to really ruin things. Will she get the blame for Gogo’s death, despite the fact that Gogo was terminal and Tumi gave the old lady one last night to enjoy? Or will her death just set off Twala family fireworks, mostly involving Vusi’s money problems? There’s also the matter of Tumi trying to keep Khaya from proposing to her, and the fact that new mom Lydia (Swankie Mafoko) is chafing under the rules of her mother-in-law Val and her doting, newly sober husband Themba (Motlatsi Mafatshe).

It’s a lot to cover in four hours, but we have no doubt that there will be lots of crazy family antics along the way.