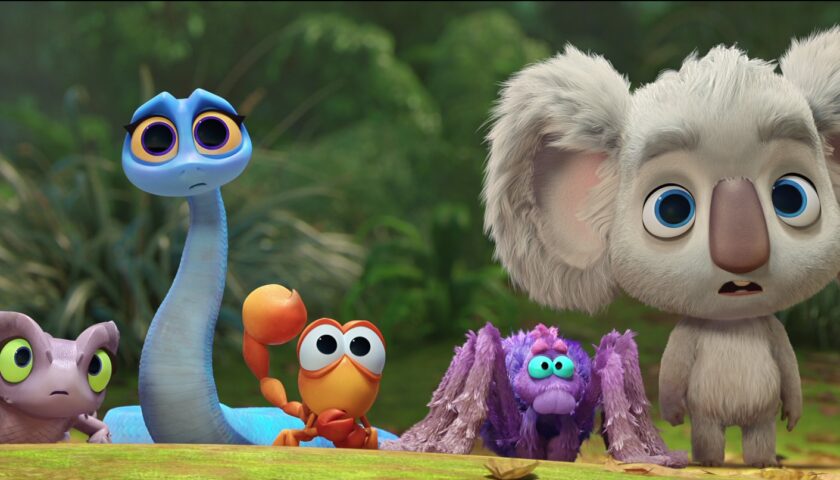 Back to the Outback 2021 Movie Review Poster Trailer Online

Netflix’s newest computer-animated adventure comedy Back to the Outback transfigure the generally misunderstood and condemned deadly and frightening creepy crawlies of Australia into the cuddliest and warmhearted animals who are devoid of a violent bone in their bodies. Directors Clare Knight and Harry Cripps, the latter of whom also wrote the screenplay, make their directorial debut with this message-driven, family-friendly, and kid-centric film that is ostensibly the latest entry into the growing mount of generic talking animal adventure. It falls into the tradition of the 2005 Dreamworks feature Madagascar in its premise of a mix of unique and eccentric zoo creatures escaping captivity to essentially go back to the wilderness.

Set in the wondrous world of the Australian Outback, Back to the Outback follows Australia’s deadliest creatures, a gang of reptiles, arachnids, and amphibians enclosed and caged in glass vivariums making a daring escape to seek a life of freedom, adventure, and self-acceptance.

The film commences by welcoming us into the Australian Wildlife Park in Sydney, home to the incredibly great extremes – some of the cutest animals in the world, but also a lot of the dangerous reptiles in the world. The most endearing and well-liked creature in the zoo is a pampered and narcissistic young koala named Pretty Boy (Tim Minchin) who is adored worldwide for his big eyes, white fluffy fur, and cuddly ways. But the residents of the park also includes inhabitants of the Danger House, the “ugly” subclass of animals – a kind-hearted but poisonous taipan snake Maddie (Isla Fisher), a smart and self-assured Thorny Devil lizard Zoe (Miranda Tapsell), a lovelorn and hairy funnel-web spider Frank (Guy Pearce), a little sensitive scorpion Nigel (Angus Imrie), and a wise gator matriarch Jackie (Jacki Weaver), who tells the crawlies stories about the Outback.

The sweet and beautiful viper Maddie was found incubating in the wild by the beefy park ranger Chaz Hunt (Eric Bana). Before her first public appearance, Maddie expected that she will be loved by her audience just like Pretty Boy. But when Chaz announces her as Medusa, a life-threatening “hideous monster” who can kill 100 people in 10 seconds on her first show to the crowd of terrified and screaming children and their fainting parents, she becomes heartbroken and disillusioned. After being tired of gawked at like they are monsters and following the shipping off of their mother hen Jackie after an ill-fated incident, Maddie has an epiphany and convinces her eclectic and idiosyncratic pals to escape the zoo and return home – back to the Outback where she hopes her compassionate family awaits.

When the obnoxious and self-obsessed viral celebrity Pretty Boy, whom they consider their arch-enemy, inadvertently joins their escape, it becomes an amusing trip of misadventures across Australia. Can the misfit ragtag group make it to the Outback in one piece with the self-centered Pretty Boy pulling them back, wanting to go back to the zoo, and with Chaz and his adventure-seeking son Chazzie chasing them to bring them back to the Park?

The film cannot boast of being original and unprecedented as the premise of confined wildlife returning to their original home after going through certain hurdles is an often employed leitmotif (Madagascar, Finding Nemo, Blinky Bill the Movie). Through the trials and tribulations they encounter in their journey, these weird mix of warm and fuzzy animals learn life lessons of the nature of home, having each other’s back in the face of adversity, and the real meaning of family.

The film also drives home the message that appearances can be deceiving and one should never judge a book by its cover which was an important thematic already accomplished in Monsters, Inc. (2001) The cherished and favored koala Pretty Boy is beautiful on the outside but is judgemental and lacks empathy and compassion for his fellow inmates. In contrast, the fearsome creatures who are assumed as ugly, hideous, and displeasing have a heart of gold and take care of each other during hard times.

Even though the overall story is predictable and formulaic and lacks unexpected twists and turns, the film has an agreeable and harmoniously embedded Aussie flavor and impression. It is a love letter to Australia’s flora and fauna and a celebration of Australian wildlife with a top all-star Australian cast showcasing stellar voice acting for the diverse characters.

The directors have attempted to portray the most misinterpreted and misunderstood creatures like the shy and gentle Taipan and the little spiders and scorpions. While most narratives dominate with the presence of super cute animals like kangaroos and koalas, Knight and Cripps bring to the spotlight the overlooked and unnoticed endemic species of Australia like taipan, funnel-web spider, saltwater crocodile, and little thorny lizard. The reference to Steve Irwin and Crocodile Dundee is unmistakably inserted into the narrative but the character of Chaz has no connection to that of Irwin.

The humor and hilarity of this film are derived from its funny characters, comical situations, and snappy one-liner dialogues. The characters of selfish and egoistical Pretty Boy vibing and strutting to Todrick Hall’s song demanding mani-pedi and coddling and Frank’s creepy sexually repressed spider who performs the mating dance evokes laughter for their quirky and strange ways. Pretty Boy complaining and moaning the loss of his snuggly, Nigel’s obsession with the soft fur of Pretty Boy, Frank calling the stars “little dandruff”, and other koalas chewing Pretty Boy’s ear off with gossip were extremely amusing.

The characterization of Pretty Boy is reminiscent of Alex, the lion in Madagascar famed for the popular exhibits in the zoo for its fame and beauty. Another clever running joke in the film is the U.S.S aka Ugly Secret Society, a clique of ingenious and resourceful misfits who comes to the rescue of their fellow “ugly” critters when they are in need. Their appearance out of the blue as soon as one utters the lengthy password serves the purpose of a deus ex machina for the helpless. The Tasmanian Devils, dung beetles, and the redback spiders are native to Australia and are utilized as divine intervention to save the bunch caught in distress. But the usage of the word “ugly” repeatedly in the film and the emphasis on the ugly society formed by misfits are something children should be approaching with caution.

The aesthetic of animation in the film may not entirely compare to Disney or Pixar productions but it is not at all a let-down. The animals are varied and distinct and the visually vibrant color tones will engross and captivate the young audience. An extensive color script is exerted to deliver the eye-popping and defining colors of the Australian sky, the red of the Outback, and the beautiful hues of each creature. The detailing of characters finds a perfect balance between fuzzy and frightening without being overindulgent in either of the extremes.

Back to the Outback is preferably suitable for children above the age of seven considering the racy and suggestive jokes and potty humor. Beyond that, the film is a decent venture that sends the message of love, respect, friendship, empathy, and self-acceptance. It reminds us to celebrate our differences to develop openness and that beauty is skin deep and has no relation to goodness or essential quality of character. It also makes it a point to convey that family is made out of those who love you for who you are, and that home is a place where you will fit in without being judged for your scales or thorns, or fangs.

Back to the Outback 2021 Movie Review Poster Trailer Online